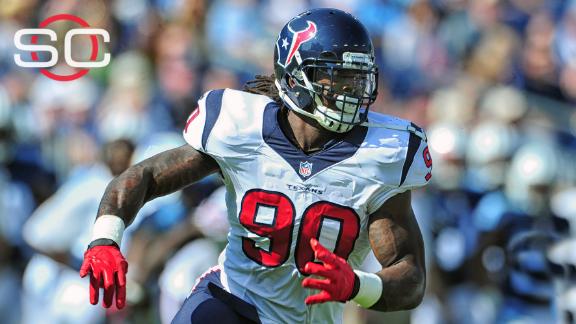 HOUSTON -- The Texans anticipate that outside linebacker Jadeveon Clowney will play in their season opener against the Kansas City Chiefs, but the team plans to be "very smart" about his playing time early on, coach Bill O'Brien said Friday.

"Now, when he comes back to be able to practice in training camp, we don't really know that yet," O'Brien said. "Obviously, he would have to practice some to be able to be ready to play in the Kansas City game, even if it was on a limited basis. But he's worked extremely hard. I think he's moving well. I think he feels better. We'll be looking forward to seeing where he is at once we get back here at the end of July."

The Texans finished their final practice of organized team activities Friday and will have three days of minicamp practices next week. Clowney attended the practices but did not participate.

In September, Clowney had arthroscopic knee surgery for a right lateral meniscus tear he suffered in the Texans' season opener last season. The Texans tried to get the first overall pick in the 2014 draft back on the field, but Clowney experienced pain and swelling. He ultimately participated in four games before being shut down for the season.

On Dec. 8, Clowney had microfracture surgery to fix the articular cartilage damage he also suffered in his season-opening injury. The Texans have repeatedly expressed confidence that Clowney will return to the player he was before the two surgeries.

"He's a young kid who's already gone through a pretty traumatic injury and has to be smart, take care of himself and be out there when he's ready, and he will be," said Texans linebacker Brian Cushing, who had surgeries on the same knee during the fall of 2012 and the fall of 2013. "He's done a really good job, and I've tried to just extend my knowledge as much as I can to him and let him know what he's going through is normal right now. He's going to have ups and downs throughout rehab coming back."

The Texans are likely to start outside linebackers John Simon and Whitney Mercilus as they work Clowney back into the lineup. O'Brien said Clowney will have to earn his spot, and the team will be careful about not returning him to the lineup too quickly.

"We're not going to rush him back and, if he does come back and earn playing time, all of a sudden play him 75 plays in a game," O'Brien said. "I think we'd have to be very smart about how much we play him early on."