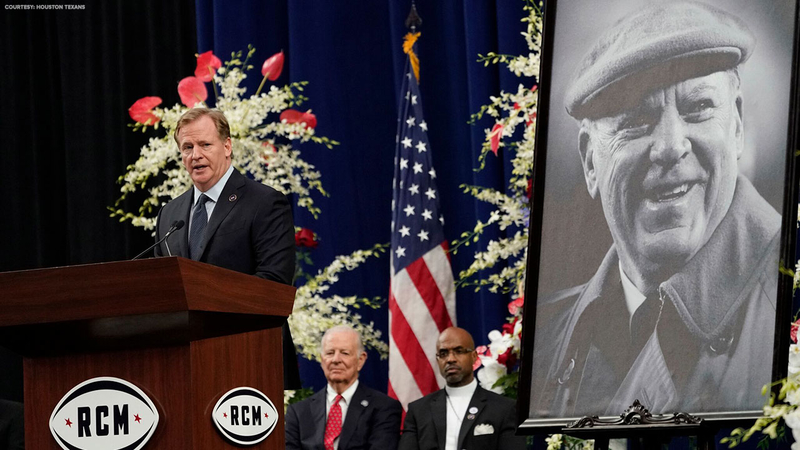 McNair remembered as respected giver during 'celebration of life'

The 81-year-old Texans owner passed away two weeks ago from a lengthy illness. The memorial service was held on the field of NRG Stadium, where the Texans will play this weekend.

McNair's death was just one of the losses that longtime friend James Baker lll experienced. His close friend, President George H.W. Bush, was laid to rest Thursday, following his death the week before.

Recalling what Bob's son Cal McNair told him of a recent hospital visit with his father, Baker said, "He took his son's hand, and said, 'You're doing a great job with the team, but they've got to get better in the red zone.'"

In addition to restoring an NFL franchise to Houston after the Oilers left town, Bob McNair was celebrated for his faith and devotion to his family, but also for his generosity. He and his wife donated more than $500 million to medical research, education and various charities. He regarded his wealth as a way to give back, as part of his faith.

Among those who praised McNair's belief in being a servant to others was NFL Commissioner Roger Goodell. McNair chaired the NFL's finance committee.

"The stadium Bob built for Houston and the Texans hosted two Super Bowls, is home to a model franchise, and is riding a nine-game winning streak. It's almost certain they're headed to the playoffs. And not to put any pressure on coach (Bill O'Brien), you know how much Bob wanted to win a Super Bowl," Goddell said.

MORE ON THE LIFE OF McNAIR

Bob McNair, owner of Houston Texans, passes away at 81

Even in dark times, McNair's family was always by him