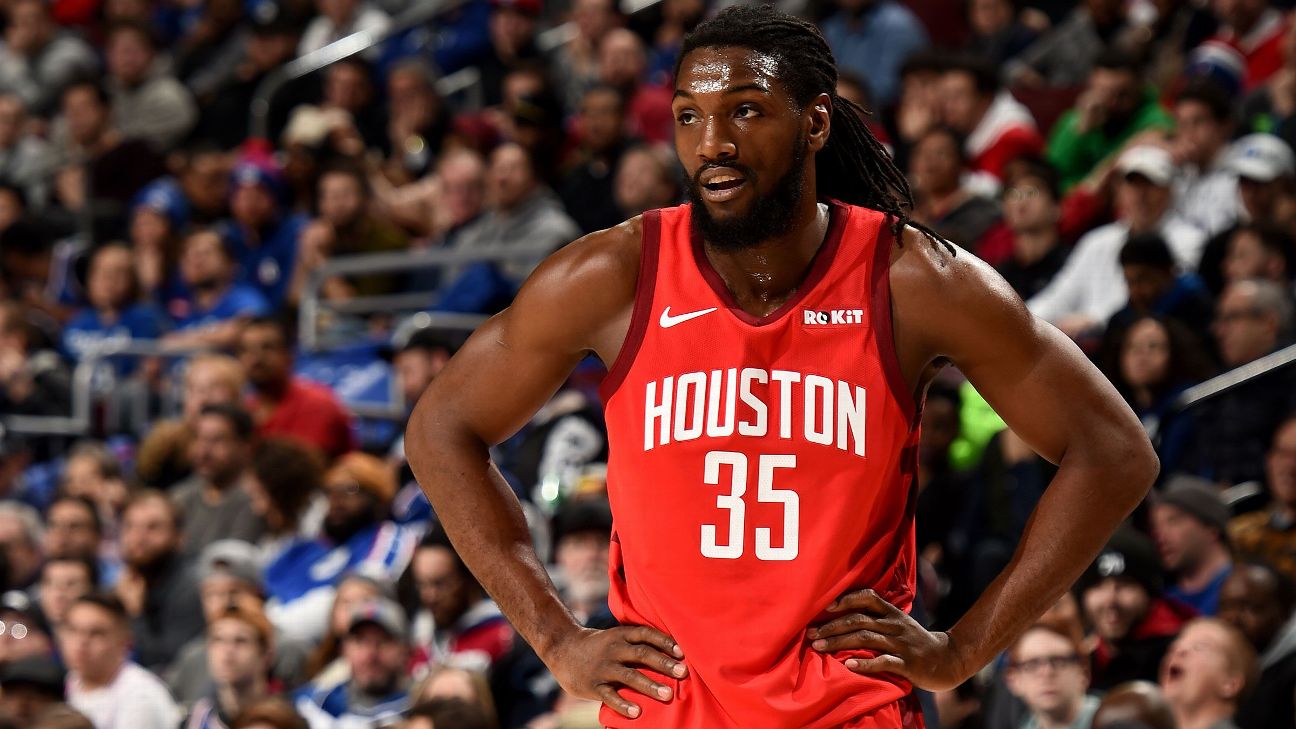 PHILADELPHIA -- After Kenneth Faried spent much of the past two seasons sitting on the bench first for the Denver Nuggets and then the Brooklyn Nets, he said after signing with the Houston Rockets prior to Monday night's 121-93 loss to the Philadelphia 76ers that he's ready for that to change.

And, with two dunks and a technical foul in his opening minutes with the Rockets, he backed up his words with his play.

"I've been focused and ready," Faried said before the game. "When Brooklyn was able to put me in, I was able to go out there and do my job and do what I do. No matter what, nobody is going to be able to take that away from me.

"I play with my heart on my sleeve and play hard and pretty much give a f---."

Faried made an almost-instant impact upon checking in. He threw down a dunk -- and earned a tech for slapping the backboard -- shortly after entering the game midway through the first quarter, then was called for two fouls while trying to guard Sixers star Joel Embiid before throwing down another massive dunk off a feed from James Harden in the second.

Faried finished with 13 points and six rebounds in 23 minutes.

Faried, 29, played just 118 minutes across 12 games with the Nets this season after playing in 31 games and a total of 461 minutes last year with the Nuggets. Faried, who grew up in Newark, New Jersey, had initially hoped he was going to get a chance to play upon being traded to Brooklyn.

Instead, he spent most of the season behind emerging young talent Jarrett Allen and veteran Ed Davis at the center spot for Brooklyn, and he admitted it was frustrating being so close to home and not playing.

"Very great for me," Faried said of beginning his career with the Rockets with games in Philadelphia on Monday and New York, against the Knicks, on Wednesday. "I get to have the family actually come see me play now.

"It sucked, like I said, being in Brooklyn right across the bridge, [and] I'm thinking everyone is going to be able to come [watch me play]. Everyone was able to come but wasn't able to watch me.

"It kind of sucked, but I'm able to get a fresh start with Houston, and the coaches and team believe in me; they want me to come out here and play and do what I do, and I'm excited to be here."

While Faried has spent most of the past two years in mothballs, that won't be the case in Houston. With starting center Clint Capela sidelined for the next several weeks after thumb surgery, there are plenty of minutes available behind Capela's replacement, Nene, for Faried to fill.

And Rockets coach Mike D'Antoni, who has never shied away from playing guys, made it clear he wasn't going to waste any time putting Faried on the court.

"Forty-eight minutes," D'Antoni quipped, when asked before the game what Faried's realistic minutes limit was.

"He hasn't played in about three years -- he'll be ready to go," he added with a laugh. "He should've stored up a lot of energy."

In theory, the energetic forward -- nicknamed "Manimal" thanks to his fiery playing style and dreadlocked hair -- should be an ideal fit for D'Antoni's system. In particular, although he has never been considered a plus defender, he should be able to help Houston's defensive rebounding -- the Rockets entered Monday's game tied with the Phoenix Suns for the worst mark in the league.

"He plays with a great amount of energy," D'Antoni said. "Athleticism, runs the floor. I think he does exactly what we do. The way we play will complement him, and he will complement us.

"I think, everything remains to be seen, but I think he's a perfect fit for us."

Faried said he first entertained the idea of playing with Harden in the future when the two spent time playing together in the summer a couple of seasons ago. But when Capela went down, both Harden and D'Antoni spoke with Faried about the potential fit in Houston and how he could make an impact with the Rockets.

"We were talking, and [Harden] saw my situation, the coaches saw my situation, and then Capela went down and Mike told me, 'Hey we can use you, if you're looking for a place to call home,' and I decided to come here."

Faried added that he wouldn't have left Brooklyn without an opportunity like this presenting itself -- and one Faried sacrificed $450,000 of his $12.9 million salary this season in a buyout with the Nets to pursue, according to league sources -- but that, once it did, the choice was easy for him.

"I was debating, but I knew I could still be in Brooklyn and get workouts in," he said. "So for me, it was more getting my workouts in and staying ready. If people did go down on [with the Nets], I was ready.

"But it so happened something happened in Houston, I got the buyout and here I am now."

Faried's first points with Rockets end with tech
Kenneth Faried dunks it down hard for his first basket for the Rockets, but gets a technical foul for slapping the backboard.
Report a correction or typo
Related topics:
sportsespndebutcentercontractkenneth fariedhouston rocketsbuyoutnbasigningclint capela
Copyright © 2022 ESPN Internet Ventures. All rights reserved.
TOP STORIES
Sergeant was to walk daughter down aisle until his hit-and-run death
Grab the umbrella! Widespread showers move in Monday
'We knew something big exploded': ABC13 recalls moment of Watson blast
2 adults killed and 12-year-old hurt in crash with speeding tow truck
Dad charged and fired from job after racist tirade posted on TikTok
Suspect accused of killing Pct. 5 corporal still on the run
Inside Texas hospital battling omicron: 'We're about to catch on fire'
Show More
5 tax changes that can boost your refund this year
Getting paid on Venmo or Cash App? New tax rule might apply to you
Tax filing season starts Monday. What to expect for 2022
Christina Aguilera says she 'couldn't be happier' for Britney Spears
Texas agriculture commissioner suing to stop aid for Black farmers
More TOP STORIES News