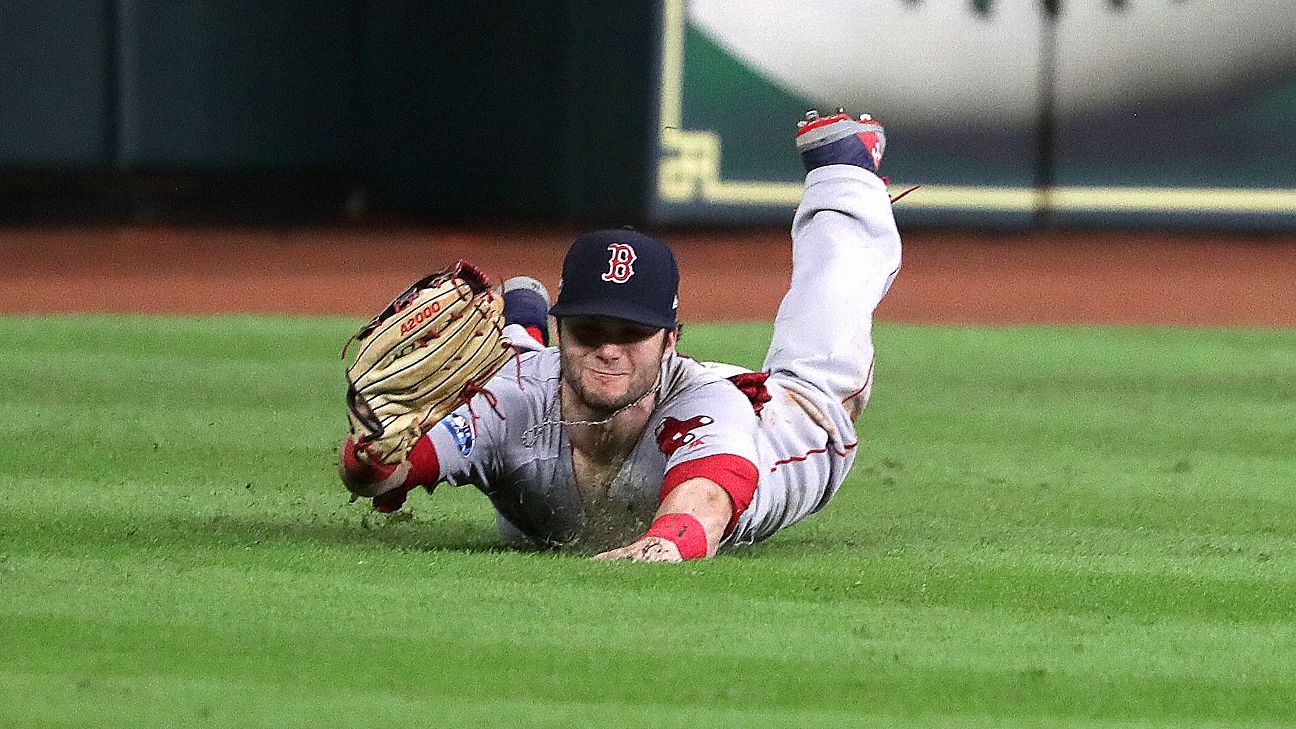 HOUSTON -- After Andrew Benintendi had made his remarkable game-saving, game-ending catch that left a skid mark of churned-up grass in the Minute Maid Park outfield, and after Mookie Betts had made the throw of his career, and after Jackie Bradley Jr. had homered again, and after Ryan Brasier had retired Alex Bregman again, and more than four hours after the controversial fan interference call in the first inning, a few scattered Red Sox players sat in the visiting clubhouse as team president Dave Dombrowski went around congratulating them on their 8-6 victory over the Astros in Game 4 of the American League Championship Series on Wednesday night.

He patted Betts on the shoulder and the likely American League MVP smiled and said, "Thank you, sir."

It was a game worthy of congratulations and thank yous -- nine innings of madness that leave the Red Sox one victory from reaching the World Series and the defending champs scrambling to stay alive. Here are six of the key moments and takeaways from this amazing game:

It all came down to the bottom of the ninth with one of those ultimate showdowns you dream up: bases loaded, two outs, the winning run on base and Craig Kimbrel, one of the best closers in the history of the game, facing Bregman, the toughest out in the postseason. A.J. Hinch had moved Bregman up to the leadoff spot, in part for the potential of getting him an extra at-bat, and sure enough, that extra at-bat came with everything on the line.

Kimbrel had walked the bases loaded, but Bregman jumped on the first pitch, a 97 mph fastball on the inner part of the plate and sent a sinking liner to left field. Benintendi, shaded over to left-center, reacted, raced, dived and hauled in the ball for the dramatic catch.

"To make that catch in that situation, that's as good as it gets," Brock Holt said. "I was pretty fired up for him. I gave him a kiss after the game and said, 'Thank you.' ... When I got in here and could breathe again, I was like, 'If he doesn't catch it, they all score and we go home tied 2-2.'"

It was a do-or-die play. In center field, Bradley wasn't sure Benintendi was going to get there. "The first thing I'm thinking is it's not going to fall," Bradley said. "Then I'm thinking, 'Block it up, block it up.'"

The soft-spoken Benintendi said he had a good jump on it, knew it wasn't hit that hard and thought he would get to the ball. "I'm glad I did," he said in the understatement of the season. It wasn't hit hard, but it wasn't an easy catch: Statcast data gave the soft liner a hit probability of 79 percent.

How incredible? Using that Statcast data and flipping the percentage to a 21 percent catch probability, we get this: That was Benintendi's lowest catch probability on the season. In other words, in Game 4 of the ALCS, with the game on the line, he made arguably his best play of the season.

The Red Sox had scored in the top of the eighth to make it 8-5 -- Betts singled with one out off Lance McCullers Jr., moved up on a wild pitch, and Martinez knocked him in with a two-out base hit. Alex Cora turned to Kimbrel for the six-out save. The longest save of his major league career to that point was four outs. He also had given up runs in each of his three postseason appearances so far.

Sure enough, Houston speedster Tony Kemp led off with a line drive down the right-field line. It looked like a sure double. Kemp burned around first base and steamed toward second, but Betts was quick to the ball and fired a perfect laser to second base, and Xander Bogaerts slapped the tag on Kemp's helmet before he got to the bag. Down by three runs, it proved to be a huge mistake by Kemp, as Kimbrel then hit Bregman with a pitch and George Springer doubled. The Astros ended up with only one run instead of a potential big inning.

It's easy to criticize Kemp, but it's easier to applaud Betts. There's a reason he's going to win his third straight Gold Glove.

"He's fast," Bradley said of Kemp. "Not many times a fast guy is going to hit it down the line and not get a double."

Major league pitcher Brandon McCarthy had the perfect description of the play on Twitter: "That's one of the most perfect plays by a right fielder I've ever seen, everyone in the world knew that was a double off the bat. You can't stop playing completely."

Yes, it's fair to label it a high-risk, low-reward effort by Kemp. You don't want to get thrown out in that situation when trailing by three runs. But Betts rewarded us one of the best -- and most important -- throws of the season.

"That's probably in the top three of my throws, for sure," Betts said. "I kind of knew off the bat he was going to second. It was one of those plays that I practiced in spring training and it just came in the game."

Once again, Boston's big blast didn't come from Betts or Martinez, but from the No. 9 hitter. Bradley turned on a first-pitch changeup from Astros flamethrower Josh James for a two-run home run in the sixth inning that give the Red Sox a 6-5 lead.

That's nine RBIs in the past three games for Bradley -- all coming with two outs. James threw 13 pitches at 100 mph or more in his outing, including three that hit 102. But Bradley had worked him for a walk in the fourth inning and by the sixth, as Hinch tried to sneak one more out from James, his fastball had dipped under 100 and he started mixing in more sliders and changeups. With two outs, Christian Vazquez doubled to deep center off Springer's glove -- a play he often makes -- and then Bradley didn't miss the changeup. His exit velocity: 104.2 mph ... a little faster than James' fastest pitch.

Replays of Jose Altuve's fly ball in the first inning that could have been a home run will be played over and over and argued about over and over and then replayed all over again. This series isn't lacking in controversy.

We have more reaction on that here, and it's easy to blame umpire Joe West and the replay crew, but Hinch was quick to say that play -- which was ruled an out because it was determined a fan had interfered with Betts' ability to catch the ball -- wasn't the difference in the game.

"It's convenient to think about it that way," he said. "But there's a lot of game left. There was a lot of action in that game. No, I'm going to go there."

OK, Kimbrel's struggles are a concern -- enough that Cora had to get David Price warming up. "I made it a little exciting the last couple of games," Kimbrel said after the game and acknowledged the stress he added to the lives of Red Sox fans by saying that at least "I'm glad they can go to bed happy."

Brasier and Matt Barnes, however, were excellent once again, with Brasier getting five outs and Barnes one to get the team through the sixth and seventh innings after a shaky Rick Porcello lasted only four frames. Those two have pitched in all four games and combined for 12 scoreless innings in the postseason. Brasier is turning into a personal Kryptonite for Bregman, getting him to fly out in the sixth when the score was 6-5. That was a big moment as Brasier got Bregman, Springer and Altuve after Eduardo Rodriguez had walked Kemp to start the inning.

"He's been amazing for us," Cora said of Brasier, who was called up in July. "He was our closer in spring training at one point. I remember when he first came in, his first game this year, it was a 4-0 game, and he comes in and I tell the guys, 'Hey, man, this guy is good.'

"They didn't even know who he was. [The starters] leave early in spring training [games]."

Now Cora must turn ahead to Game 5. Brasier and Barnes have appeared in all four games and Kimbrel needed 35 pitches to get through his two innings, so that will leave Cora with some tough choices on how to manage his bullpen Thursday. It's certainly unlikely that none of the three will appear if the Red Sox are behind and Cora confirmed there's no chance that Chris Sale, who has been pushed to Game 6, would appear in relief. That takes us to ...

Even though Price was warming up in Game 4 -- Cora said he would have used him in the ninth if the Red Sox had scored a couple of runs because he didn't want to send Kimbrel back out after a long break between innings -- he gets the ball to start Game 5 on three days of rest.

Really, Cora doesn't have another logical choice, with Sale still recovering from his stomach illness. He could go with Rodriguez, but he pitched in relief the past two games (although throwing only 23 pitches). It makes sense to line it up as Price, Sale and Nathan Eovaldi in a potential Game 7, with Porcello becoming another relief options if the series goes back to Boston.

So it will be Price trying to pitch the Red Sox into the World Series. After the Game 4 win, he huddled with the media holding his year-old son Xavier, who was well past his bedtime and playfully reaching out to the microphones. After initially denying that he knew he was going to start, Price was informed that Cora had just announced he would be starting.

"I knew that," he laughed. "I'm starting tomorrow. We know we have to come ready to play and try to finish it up here. We're one win away." 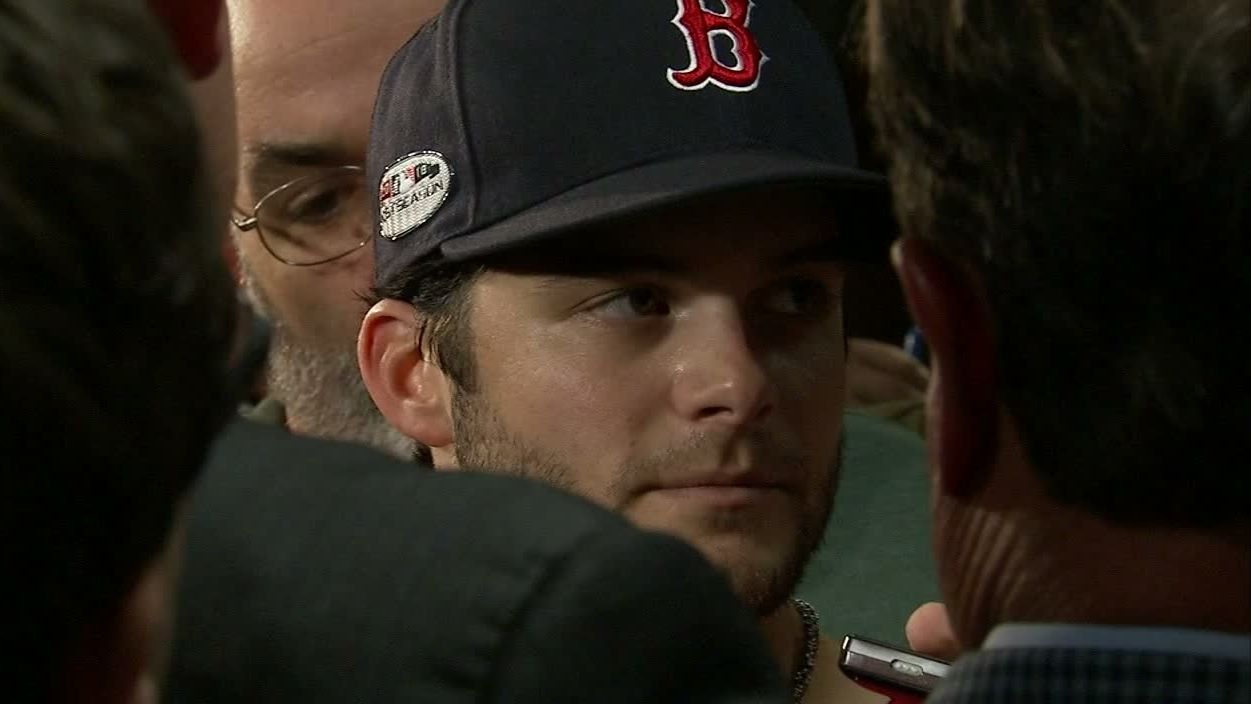 Benintendi talks catch to end Game 4
Andrew Benintendi breaks down the approach on his game-winning catch, saying he was committed to diving no matter what.

Benintendi's sliding grab saves game for Red Sox
With the bases loaded in the bottom of the ninth, Alex Bregman hits it to left field where Andrew Benintendi dives to make the game-ending catch.

Betts' throw gets Kemp out at second
Tony Kemp hits a rope to right field and hustles to make it a double, but Mookie Betts fires a dart to second base to get Kemp out.

Altuve ruled out on fan interference
Mookie Betts tries to make a play at the wall on a Jose Altuve hit, and the umpires rule that a fan interfered and call Altuve out.
Report a correction or typo
Related topics:
sportsespnpostseasonboston red soxmlbandrew benintendialcshouston astrosal championship seriesamerican leagueplayoffs
Copyright © 2022 ESPN Internet Ventures. All rights reserved.
TOP STORIES
Daylight shows home destroyed after standoff with shooting suspect
What we know about man accused of shooting 3 HPD officers
Suspect arrested after 30-minute chase ends on I-45 in Texas City
Clouds clearing today, sunny through the weekend with rain next week
5 people charged in connection with Pct. 5 corporal's murder
How many times can I reuse my N95 mask?
Decades after TV anchor disappears, convicted rapist denies connection
Show More
Driver dies after slamming into 18-wheeler's trailer on US-59
Woman shot in the shoulder during robbery set up in SW Houston
Prepare for a major closure at I-69 and 610 West Loop this weekend
Officers escort body of corporal killed in ambush to funeral home
ABC13 obtains HPD scanner traffic of chase that led to shootout
More TOP STORIES News