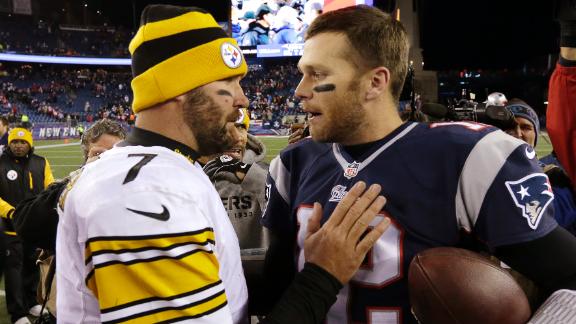 The New England Patriots will begin the defense of their Super Bowl title by hosting the Pittsburgh Steelerson Sept. 10 in the Thursday night opener of the NFL's 2015 season.


New England opened as 6-point home favorites over Pittsburgh, according to the Westgate SuperBook, as the Steelers will play the game without star running back Le'Veon Bell,who is suspended for the first three games of the season.

The Thursday game will be one of five prime-time games played by both the Patriots and Steelers -- tied for the most with the Baltimore Ravens, Dallas Cowboys, Denver Broncos, Green Bay Packers, Indianapolis Colts, New York Giants, Philadelphia Eagles and Seattle Seahawks.


Another date of interest will be the league's annual Thanksgiving showcase, which this year will feature the Packers hosting the Chicago Bears, the same nightGreen Bay is expected to retire former quarterback Brett Favre's No. 4 to the stadium's facade.


The matchup of NFC North Division rivals is slated for prime time Nov. 26. It will be the first time since 1923 that Lambeau Field has played host to a game on Thanksgiving.


"I think it's great, and it will be great for our fans, the first time we've had a Thanksgiving night game here at Lambeau Field," Packers coach Mike McCarthy said. "I think it will definitely be a special night."

Both Dallasand Detroitwill continue their traditions of hosting games on Thanksgiving, with the Cowboys facing the Carolina Panthersand the Lions going against the Eagles.


The Panthers will be making their first appearance on Thanksgiving and it will be a reunion of sorts, as Carolina will face former defensive end Greg Hardy, who signed with Dallas this offseason.


Sporting a revamped roster, Philadelphia will open their season in the first game of a doubleheader on ESPN's Monday Night Football. The Eagles will travel to Atlantato face the Falcons while the Minnesota Vikings will travel West to play the San Francisco 49ers in the nightcap.


New Philadelphia running back DeMarco Murray will get his first crack against his old team in Week 2 when the Eagles host the Cowboys. Week 9 will see Murray's return to Dallas.


The Eagles' reunions won't end there as Week 14 will see the team play host to running back LeSean McCoy, who the team traded to the Buffalo Bills this offseason.


For the first time in league history, three games will be played in London:Jets-Dolphins (Oct. 4), Bills-Jaguars (Oct. 25), and Lions-Chiefs (Nov. 1).


Information from ESPN.com's David Purdum contributed to this report.