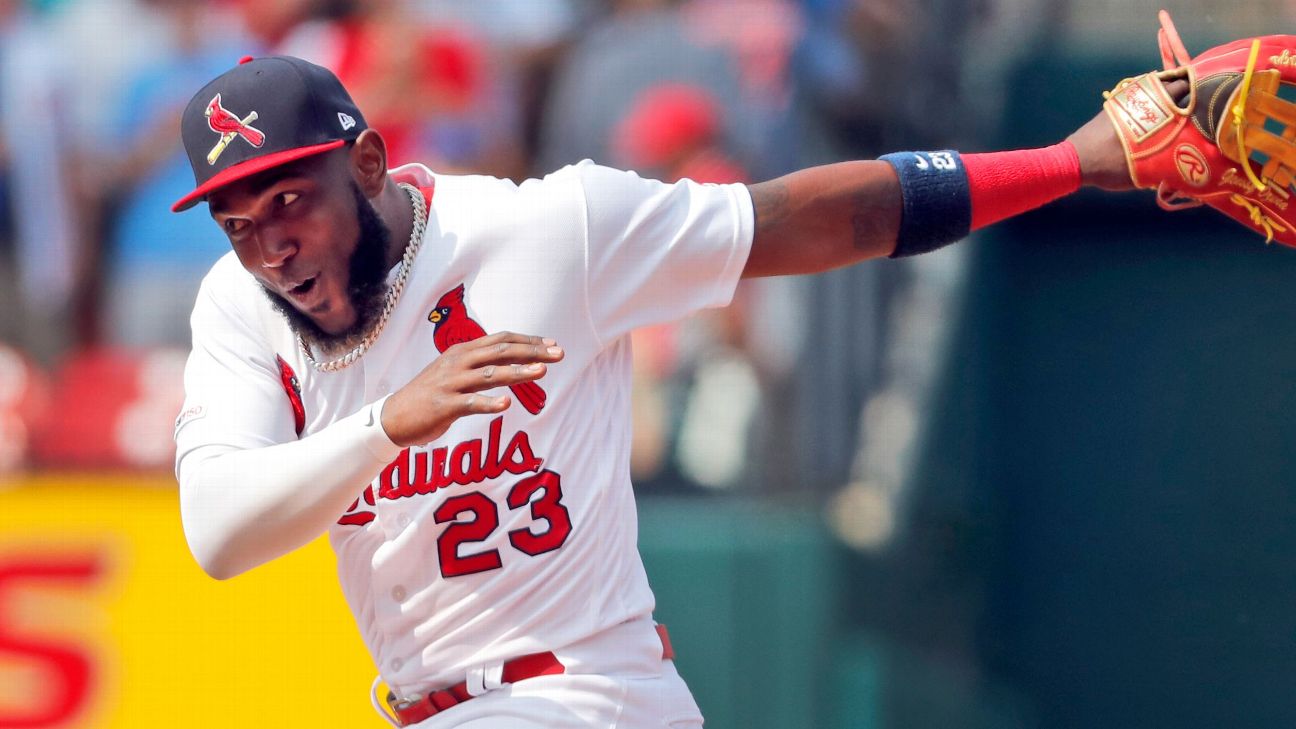 Among this weekend's most intriguing matchups are Cubs-Cardinals and Red Sox-Rays, series with some strong feelings attached to them, even in early June. Plus, will the Astros rake the Orioles' homer-happy pitching? Who will come out on top in a showdown between phenoms past and present?

Here's what we're most excited to see:

Over the past few weeks, the Chicago Cubs and St. Louis Cardinals (Sunday, 7 p.m., ESPN) both have been floating around .500. Look into your crystal ball: Who makes the playoffs? Cubs, Cardinals, both or neither?

Eddie Matz: The Chicago Craig Kimbrels are in. Not that their bullpen was horrible before (fourth-best ERA in the National League), but now? Fuhgedaboutit. For the Cardinals to get a wild card, they'll need to be better than the Philantawaukee Braveries. I don't think that happens this year.

Sam Miller: It's a lot better to float around .500 when you're already well above .500, as the Cubs were after the season's first six weeks. It's also better when you're running through the difficult stretch of your schedule, as the Cubs have been. After the Dodgers, the Cubs are probably the safest pick for an NL playoff spot, and by signing Craig Kimbrel they're wisely acting like it. I think I like the Cardinals a little more than the betting line does, but that's a mess of a wild-card picture, and the surging Nationals are just making it messier.

David Schoenfield: I'll tag along behind Eddie and Sam and go with the Cubs, as well. The lineup is deep, with five guys potentially hitting 30 home runs (that's never been done before). The rotation is solid, and now the bullpen should be much better. The Cardinals don't have any glaring weaknesses, but -- so far, anyway -- they don't have any obvious strengths. They just need Paul Goldschmidt, Matt Carpenter, Yadier Molina and Miles Mikolas to play like they did in 2018. I had the Cards as a wild card before the season, but right now, I think I'd predict them to fall short -- in part because they're counting on a bunch of 30-somethings to perform better.

The Rays visit Fenway Park for four games with the Red Sox. What are the chances, from 1 to 100, that this is a preview of the American League wild-card game?

Matz: Without Austin Meadows, the Rays went 9-6. Without Tyler Glasnow, they've won 13 of 22. Without Joey Wendle... well ... they've been without Joey Wendle for pretty much the entire season. I don't know how they keep doing it, but they keep doing it. The only way this isn't a wild-card preview is if Tampa Bay manages to outlast the Yankees for the AL East title. Which could totally happen. In fact, Baseball Prospectus currently has the Rays at 42.1% to win the division; FanGraphs has them at 22.7%. I'll take the average (32.4) and say there's a 68% chance that TB v. BOS is a wild-card preview.

Miller: 51/49, though I'd bet the wild-card game will be held not in Boston but in St. Petersburg. I'm personally happy that this weekend's series is in Fenway, though, so that we can drop "playoff-type atmosphere" into our descriptions of it. There also is an almost 100 percent chance that, if it is Red Sox and Rays on Oct. 1, Boston's starter will be Chris Sale -- the one pitcher Tampa Bay gets to avoid this weekend.

Schoenfield: I want to say 100, if only because I'm already dreaming of a Chris Sale vs. Blake Snell wild-card showdown of showdowns before 12,000 fans at the Trop. I kid! Well, sort of. What's up with Tampa Bay's attendance? The Rays currently are averaging 13,802 per game, which is low even for them. They recently drew the smallest crowd in franchise history. They're averaging almost 10,000 fans less per game than they did in 2009 and 2010, when they averaged more than 23,000 per game. This team deserves to play in front of more fans. Anyway, I half-expect the A's to make one of their patented second-half runs, but the Red Sox should hold them off.

Sunday's schedule includes a cool matchup of pitching phenoms past and present, as the Nationals' Stephen Strasburg faces the Padres' Chris Paddack. What "first impression" by a rookie pitcher stands out in your memory?

Matz: Gregg Olson, 1989. A year after Baltimore lost 21 straight to start the season, he was a huge part of the "Why Not" Orioles that shocked everyone and came this close to beating out Toronto for the AL East pennant. Olson had a cup of coffee in September 1988, but his real first impression came that following season, when he used that monster curveball of his to save 27 games and win rookie of the year. Of course, it was the same herculean hammer (if memory serves) that led to a game-tying wild pitch against the Blue Jays in the final series of the season, which led to a blown save, which led to an O's loss, which led to a second-place finish, which led to a certain high school senior running away from home not long after that. (OK, so technically, I went to college, but that doesn't sound nearly as dramatic as running away from home.)

Miller: On May 10, 2013, Shelby Miller threw a complete-game one-hitter, striking out 13 and walking nobody. It was just his eighth major league start, and it lowered his career ERA to 1.52. My memory of that start is a little prom-night fuzzy, but my recollection is that he threw almost nothing but fastballs, that he threw almost nothing but strikes, that the Rockies hitters all looked like they were drunk on peach schnapps, and that in the ninth inning that start and I slow-danced to K-Ci & JoJo's "All My Life."

Schoenfield: I'm going to cheat and mention two pitchers, but it's not cheating because both mentions come from 1984. That was Dwight Gooden's rookie year, and imagine if we had Twitter and social media back then. He struck out 10 in his fourth start and followed up with another 10-strikeout game. He fanned 11 and then 14 and then would really kick into gear in September when he had back-to-back 16-strikeout games -- still the only pitcher to do that. Remember, this also was when strikeouts were harder to come by. Gooden had 15 double-digit strikeout games that year -- and there were only 91 all season. He had 16.5% of all double-digit strikeout games. And he was 19!

The other rookie pitcher that year was Mark Langston (like Gooden, he led his league in strikeouts). Since I'm from Seattle, I saw him a lot more. As with Gooden, I can't remember the specific first game I saw him pitch, but I do remember sitting out in the left-field bleachers for an August game against the Tigers (who would go on to win the World Series). Langston, with that high leg kick that was pure awesomeness, pitched a two-hit complete game with 12 strikeouts. Tigers manager Sparky Anderson called him the best young lefty he'd ever seen (if my memory is correct).

Your turn: What are you most looking forward to seeing this weekend?

Miller: InMax Scherzer's career, he has thrown a 17-strikeout, no-walk no-hitter; thrown a 10-strikeout, no-walk no-hitter; thrown the closest thing we've seen to a "Statcast no-hitter" and struck out 20 batters in a start, one of only five 20-K games in history. He is probably the best pitcher in the game, but he isdefinitely the best jaw-dropping-pitching-line pitcher in the game. This year, he has the best strikeout rate of his career, and on Saturday, he faces the Padres -- who have a good lineup, but they strike out more often than any team in baseball. If I could pick one game for 21 K's this year, it would be this one, so I'll be watching.

Schoenfield: I just picked my Way Too Early All-Star Roster and didn't fit Austin Meadows on it. Rays fans let me have it. I had Mike Trout, Mookie Betts and Joey Gallo as the starters, and George Springer, Michael Brantley, Byron Buxton and Trey Mancini (as the Orioles' rep) in reserve. Meadows has been amazing, but his track record isn't the same as Springer and Brantley, and he doesn't play center field like Buxton. To make up for that omission, I'm going to watch Meadows take on the Red Sox.

We have what appears to be an epic mismatch in Houston with Astros-O's. Houston's run differential for the weekend: Over or under 8.5?

Matz: Without Jose Altuve, Carlos Correaand George Springer, the Astros' offense isn't its usual overpowering self. Plus, Dylan Bundy has been much more effective lately, and the Orioles luck out by missing Justin Verlander. Under.

Miller: If the Astros' winning percentage and the Orioles' winning percentage are accurate reflections of each team's true talent, then the Astros are slightly more likely to sweep than not (without even considering Houston's home field advantage). If that happens, then one blowout is all it'll take, and a quick tally finds that, against the AL's best teams, the Orioles have been blown out only slightly less often than once every three games. The Astros are better than the AL's best teams. So: Over.

Schoenfield: The Mariners just beat the Astros 14-1. Anything can happen in baseball! The Astros are rolling out their B lineup these days, and the Orioles' pitching has actually not been as miserable as it was in April. Under.

Talk of star power in the National League this season has been dominated by Belly and Yelly -- Cody Bellinger and Christian Yelich -- but for those who haven't noticed,Anthony Rendon and Nolan Arenado, two old standbys, are having great seasons again. Who will have more total bases this weekend: Rendon or Arenado?

Matz: Arenado hasn't been great at Citi Field, andJacob deGromhas his number (2-for-17 lifetime). But when it comes to total bases, it's all about the dingers, and Colorado's third baseman has hit four in 14 at-bats against Steven Matz (Friday's starter). So even though Rendon is completely locked in at the plate right now, I'm taking Arenado here.

Miller: Since the Nationals hit their lowest point, they've gone 9-2 and Rendon has hit .359/.500/.667 (through Wednesday). Rendon's worldwide recognition as a superstar is long overdue, so I'm personally pulling for him to keep slugging, for the Nationals to keep making up ground in the pennant race and for a bunch of MVP voters to write late-summer columns making Rendon's case. He gets two lefty starters in San Diego this weekend, so I'll go with him.

Schoenfield: Here's a fun/sad fact: Rendon has never made the All-Star team. Is he the best active player never to make one? Probably -- him or Andrelton Simmons.

Most career WAR, no All-Star appearances among active players:

Rendon should make it this year, although if Arenado starts and Kris Bryant or even Manny Machado win the player vote, Rendon could get squeezed out.

What's your pick for the Sunday night game at Wrigley?

Matz: The three most important things my parents taught me are: (1) Always look both ways before crossing the street, (2) don't lie and (3) never bet against Kyle Hendricks. I'll take the Cubs.

Miller:Adam Wainwright's strike rate has now fallen in each of the past four seasons, and this year's rate -- just under 60 percent -- is the lowest of his career, the second lowest among all NL starters and the cause of the career-high seven walks he issued in his (otherwise excellent) last start. There are good pitchers with low strike rates, to be sure, but the Cubs lead the majors in walk rate this year. They are the team most likely to make Wainwright pay.

Schoenfield: Hendricks threw that 81-pitch shutout in his previous start against the Cardinals. He won't do that again, but he'll pitch the Cubs to victory.