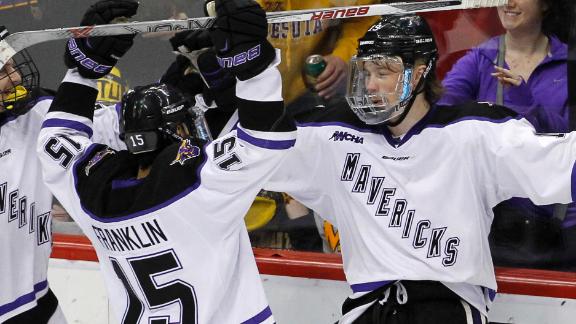 BOSTON -- Saturday night saw Boston University skate a tournament team trophy around the ice for the second time this season. With Beanpot and Hockey East championships already secured, the Terriers now set their sights on a return trip to the TD Garden in three weeks when the NCAA Frozen Four comes to town April 9.

Minnesota State, North Dakota, Boston and Miami, in that order, were awarded No. 1 seeds for the 2015 NCAA men's hockey tournament. The pairings were announced Sunday afternoon on ESPNU.

The tournament has six teams from NCHC, three each from ECAC and Hockey East, two from WCHA and one each from the Atlantic Hockey and Big Ten.

Michigan Tech, which spent time this season ranked No. 1 in the nation, will be making the school's 11th NCAA appearance but first since 1981. Every other school in the 16-team field has appeared in the past 10 years, and North Dakota extended its consecutive appearance streak to a nation-best 13 years.

Minnesota State, making only its fourth NCAA tourney appearance, is the top seed in the Midwest Region but has never won a game in the national tournament (0-3). The Mavericks are tied for the fewest losses (7) with Boston and will face an RIT team that's only other NCAA appearance saw the Tigers advance to the Frozen Four in 2010.

The West Region No. 1 seed is North Dakota, a tradition-rich program that has the best NCAA tournament winning percentage (46-24, .657) for any school that has played at least 15 games. UND has made 20 Frozen Four appearances but hasn't won a national championship since 2000.

Boston, the top seed in the Northeast, is making its 33rd NCAA appearance and last won a title in 2009. And Miami, thanks to its NCHC championship Saturday night, captured the last No. 1 seed and takes the top slot in the East Region but will face host Providence College at the Dunkin' Donuts Center to begin regional play.

Three of the 16 schools enter NCAA play with winning streaks of at least five games, led by RIT's seven-game run, while BU (5) and Minnesota State (5) are also hot as the national tournament begins.

Seven of the 10 Hobey Baker finalists play on teams that have qualified for the NCAA tournament. Among that group are Boston freshman center Jack Eichel, who leads the nation in scoring (24 goals, 42 assists), and Harvard junior left winger Jimmy Vesey, who has scored a nation-best 31 goals.