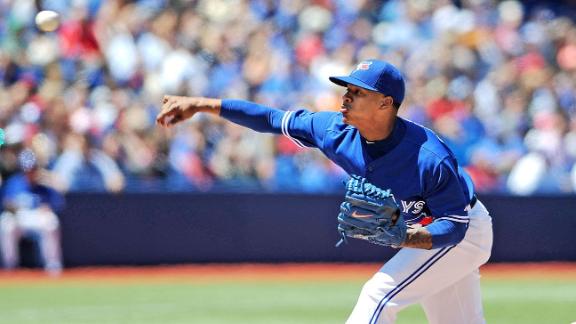 Toronto Blue Jays pitcher Marcus Stroman has a torn ACL and will miss the 2015 season, the team announced Tuesday.

The 23-year-old righty went 11-6 with a 3.65 ERA last season as a rookie and figured prominently in the team's hopes to reach the postseason for the first time in 22 years.

General manager Alex Anthopoulos said Stroman was participating in bunting practice when he was called off by third baseman Josh Donaldson. Stroman planted his feet to stop then felt a pop in his left knee. An MRI confirmed the tear.

Anthopoulos said Stroman will visit Dr. James Andrews for a second opinion, but surgery is expected.

After an early (and rocky) stint in the bullpen, Stroman joined the Blue Jays' rotation May 31 and made 20 starts, going 10-6 with a 3.29 ERA, 1.15 WHIP and 103-to-27 strikeout-to-walk ratio the rest of the way. He took a no-hitter into the seventh inning against the Red Sox in July and pitched seven shutout innings against the A's that month. He had a three-hit, zero-walk shutout of the Cubs in September. He went 5-1 with a 1.83 ERA in six starts against the Yankees and Red Sox.

Stroman took to Twitter on Tuesday to express his disbelief over his injury.

Information from ESPN.com's Jayson Stark and The Associated Press contributed to this report.