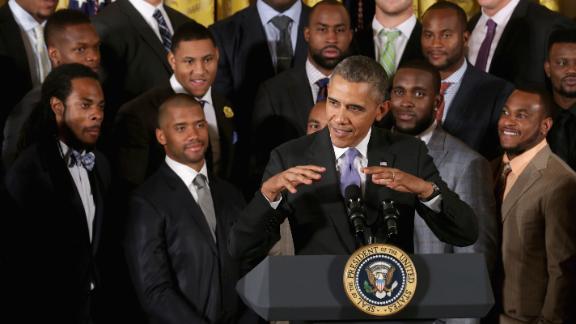 Marshawn Lynch's mother says there was no hidden message behind her son's absence at the White House on Wednesday while most of the rest of his Seattle Seahawks teammates were being honored by President Barack Obama.

"He just said he didn't want to go," she told The Seattle Times.

She told the newspaper that although Lynch has been mourning the death of a relative, "no particular reason was given" for why the running back didn't want to go.

"I'm sorry he's not here," Obama said, "because I want to say how much I admire his approach to the press. I want to get some tips from him."

To which someone in attendance shouted out: "It's about the action!" -- a line Obama then repeated.

Delisa Lynch told the Times she texted her son to let him know he got a shoutout from the president, although she was "sure" he was watching the ceremony. She said it was "really considerate" for Obama to mention her son even though he wasn't with the rest of his teammates at the White House.

She told the newspaper that she told her son in a text that "Obama gave him some mad props and he texted back 'laughing out loud.'"