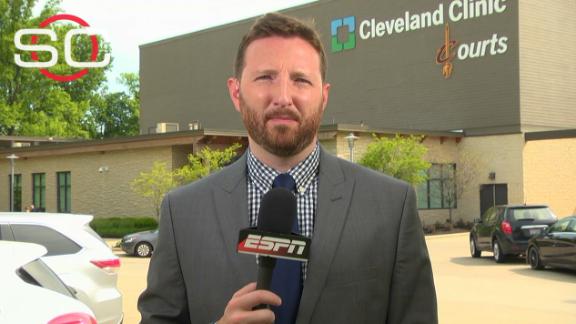 INDEPENDENCE, Ohio -- It didn't take long after the Golden State Warriors beat the Oklahoma City Thunder in the Western Conference finals for various sports books to dub the Warriors the significant title favorites over the Cleveland Cavaliers in the NBA Finals.

According to the Westgate Las Vegas SuperBook, Golden State is a 5.5-point favorite to win Thursday's Game 1 (9 p.m. ET, ABC) and approximately a 2-to-1 favorite to capture the championship.

The odds mean little to LeBron James, however.

"Not my concern," James said Tuesday, speaking to the media for the first time since the Cavs' Finals rematch with Golden State was set. "I don't get involved in all of that -- underdog, overdog, whatever the case may be. It's stupidity."

James was confident in the Cavs' chances compared to last June when Cleveland lost Games 4, 5 and 6 and the series after being up 2-1, but he framed that confidence as nothing that warrants special attention.

"We're better built to start the Finals than we were last year," James said. "Doesn't matter who it's against. I mean, that's not a headline. It's obvious."

Instead of getting home-court advantage in the Finals, which they would have had if the Thunder had won, the Cavs will fly to California on Tuesday for the start of the series later this week against the team with the greatest regular season-record in league history (73-9).

"It didn't matter," James said. "Like Coach [Tyronn] Lue said, we're just waiting on the winner. We're fortunate to be here and we look forward to the challenge. It's an unbelievable team that we're going against. Hats off."

Lue downplayed the significance of the Warriors' success against the Cavs in the past as a factor for the Finals.

And based on Irving's response when asked about the Warriors' 34-point drubbing of his team in Cleveland on Jan. 22, the Cavs believe they are a completely different team than they were several months ago, too.

"In January?" Irving said Tuesday. "I don't remember it."

Irving said that the memory of going out with a fractured kneecap in Game 1 of last year's Finals isn't giving him any extra motivation for him this time around.

"No, the Finals are the Finals," Irving said. "Just happy that we're back here again."

James was similarly pleased to be back with a roster that is fully intact, calling it the "biggest difference for our team."

"We have another year under our belt and more chemistry, but health-wise, you know we're healthy and we're excited about the opportunity," James said.

The anticipation was palpable for a team that's waited 12 months and a city that's waited 52 years to have a chance to be crowned champions.

"I think everyone here -- everyone in the world -- knows this is what the game wanted to see," Irving said. "No. 1 and No. 1 in the Eastern Conference and Western Conference, respectively. This is what it's about, right here: top-level basketball, a lot of great players on one court at one time and two great teams just competing."

LeBron not concerned with Finals odds
LeBron James tells reporters he's not paying attention to the Warriors being favored to win the NBA title over the Cavaliers and says Cleveland is better built to win a championship this season than last season.