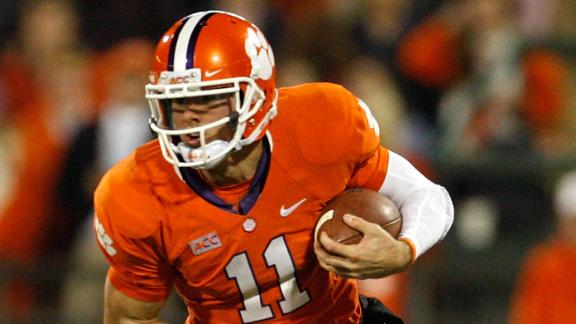 BUFFALO, N.Y. -- Mississippi football signee Chad Kelly's lawyer said he has video showing his client was not the aggressor in a fight at a downtown Buffalo nightclub over the weekend.

"It's obvious Chad was not the one who started this incident," Thomas Eoannou told The Associated Press by phone Monday, a day after the quarterback was charged with numerous counts, including resisting arrest.

Eoannou said the video disputes an allegation that Kelly threatened staff by saying: "I'm going to go to my car and get my AK-47 and spray this place." The comment was included in Kelly's arrest report filed by police.

"There's no evidence of a threat of an AK in that video," Eoannou said.

Kelly, the 20-year-old nephew of Buffalo Bills Hall of Fame quarterback Jim Kelly, is scheduled to appear in court Jan. 5.

Last week, he committed to play at Ole Miss. Mississippi said in a statement Monday that the team is "gathering facts on the matter."

Kelly, who grew up in nearby Niagara Falls, and a male companion were arrested shortly after 3 a.m. Sunday. The two allegedly attempted to re-enter the club after being ejected earlier in the night.

Among the other charges Kelly faces are second-degree menacing with a weapon, second-degree harassment and third-degree assault. He was arraigned in Buffalo City Court and released without bail.

In April, Kelly was kicked off the Clemson football team for what was said to be detrimental conduct. That happened two days after he was benched during a spring game for disagreeing with coaches over strategy on a fourth down.

Kelly enrolled at East Mississippi Community College, where he led the school to the National Junior College Athletic Association title this month.