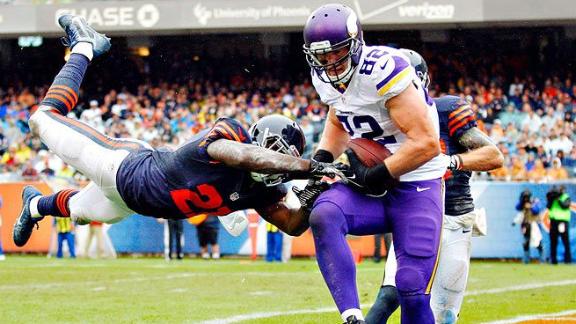 The Minnesota Vikings have agreed to an extension with tight end Kyle Rudolph, the team announced in a statement.

The contract is a five-year deal worth a minimum of $36.5 million, and could be worth up to $40 million, according to a league source.

Rudolph is guaranteed $19.4 million in the new deal. He'll receive a $6.5 million signing bonus and a $960,000 guaranteed base salary this season, while the remaining $12 million of the guarantees are for injury only.

"I'm extremely excited to get this extension completed and continue my career with the Minnesota Vikings," Rudolph said in a statement. "I've said all along I wanted to stay in Minnesota. I love the fans, the community and, most importantly, I'm excited about where this team is going. I'm looking forward to the 2014 season and helping this organization reach our ultimate goal."

Rudolph, a second-round pick of the Vikings in 2011, was named Pro Bowl MVP in his lone appearance in 2012.

"Our whole focus on moving forward in this organization is to draft our players, develop them and keep them here," Minnesota general manager Rick Spielman said in a statement. "He's one of our young guys who is going to be a building block as we go forward in the future and just very excited to get this behind us so we can look forward to seeing him produce over the coming years."

Vikes Extend TE Kyle Rudolph
Ben Goessling discusses why the Vikings agreed to an extension with TE Kyle Rudolph instead of holding him to the remaining year of his rookie contract.