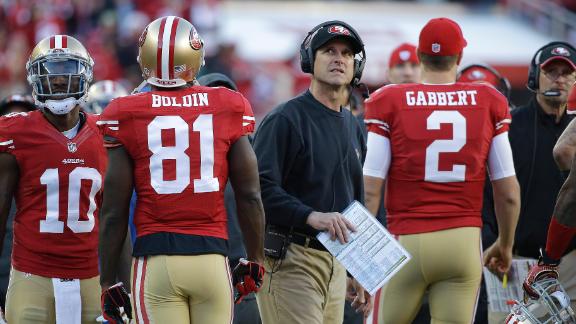 SANTA CLARA, Calif. --San Francisco 49ers CEO Jed York said "philosophical" differences that could not be reconciled between the Niners and Jim Harbaugh led to the ultimate breakup between team and coach and added that he wants a "teacher" as the Niners' next head coach.

Those were two of the topics broached in a wide-ranging and often combative 50-minute news conference on Monday as York shared the dais with general manager Trent Baalke.

"Again, we've had philosophical discussions, and when we sat down we just couldn't come to a place where we thought moving together was the best for either party. This wasn't us saying, 'Jim, you're fired, you're not here anymore.' This wasn't Jim saying, 'I don't want to be there, I'm leaving.' It was a discussion that took place over a decent amount of time to figure out what's best for everybody involved.

"It wasn't an easy conclusion for anybody, but that's where we ended up."

York, though, would not shed any light on what was said in those discussions, saying they were "private" in nature, though he did acknowledge that teams had inquired about trading for Harbaugh, and Harbaugh was not interested.

"It was the right decision for both parties at the time," York said.

Said Baalke: "There's always philosophical differences. Every organization has them, and for whatever reason, we weren't able to pull this thing together. And now it's time to move on, and we're confident in our ability to do that."

The next step, then, is to hire a new coach.

York said he and Baalke "have an idea of who fits" the Niners' brand and they would interview candidates together, although they have not approached anyone yet, and some candidates may currently be on a playoff team.

"We're not in a rebuild," Baalke said. "This is a reload situation."

Baalke said he hoped to have a new coach in place within seven to 10 days.

A league source told ESPN NFL Insider Adam Schefter that the 49ers, along with the Falcons, already have requested permission to interview Patriots offensive coordinator Josh McDaniels, who can talk with teams during the bye week.

Plus, defensive end Justin Smith may retire, and linebacker Ahmad Brooks was not sure whether he would return.

The next coach may also have to be adept at recruiting as well as tutoring.

"I think what made Bill Walsh so successful was he was a teacher," York said. "Whether that was with players or whether that was other coaches. And you look at his successful coaching tree ... I want to say as of 2012 or 2013, 29 of the 32 coaches in the NFL had either a direct or indirect connection to Bill Walsh."

Harbaugh Reflects On Time With 49ers
Jim Harbaugh addressed the media after the 49ers finished their season with a win over the Cardinals.