How the Milwaukee Bucks outlasted two MVPs without their own

HOUSTON -- Giannis Antetokounmpo wanted to protest the call but knew he didn't have the case. The reigning MVP had nobody to be mad at but himself as he made the long walk from the opposite baseline to the Milwaukee Bucksbench.

Antetokounmpo had been absolutely dominant since halftime of Thursday's season opener, reeling off 20 points, ripping down eight rebounds and dishing out five assists in less than 14 minutes on the floor as Milwaukee stormed back from a 16-point deficit to take a six-point lead on the road against the Houston Rockets.

But that whistle, blown when he nudged his forearm intoClint Capela's back to knock the Rockets big man off balance as he went up to catch a lob was Antetokoumpo's sixth foul. He had to helplessly watch the final 5:18.

"I was pissed. I'm not going to lie," said Antetokounmpo, who finished with 30 points, 13 rebounds and 11 assists. "Obviously, stupid sixth foul. I got under Clint Capela. I could've avoided it, but it's a [season] opener. You're so excited. But you have to be able to, as a basketball player, to control your excitement."

Antetokounmpo couldn't contain his smile as he criticized himself. That's because his Bucks teammates managed to hold on for a 117-111 victory despite the reigning MVP's disqualification -- and the efforts of the other two most recent MVPs wearing Rockets uniforms.

The Rockets, as you might recall, brashly stated their belief that James Harden should have repeated as the MVP last season. They tweeted (and later deleted) his case seconds after it was announced that Antetokounmpo, who led the Bucks to the league's best record, won the honor.

Those final five minutes of Thursday's contest would have been a heck of a time for Harden to get a small measure of revenge, but that didn't happen. He was out of sorts the whole game, taking the blame for the Rockets' loss after the Bucks held him to 19 points on 2-of-13 shooting, including only four points and no field goals in the second half.

Or the stage could have been set for Russell Westbrook to put the finishing touches on a storybook Houston debut.

Westbrook, once considered a villain in Houston due to his victory over Harden in the 2016-17 MVP voting, was certainly thrilling in his first regular-season appearance in Rockets red. Westbrook was the primary reason the Rockets had a chance down the stretch, scoring 19 of his 24 points in the second half, including eight in the final five minutes. He also finished with 16 rebounds and seven assists, bringing the anticipated turbo boost to the Rockets, whose 27 fast-break points matched their highest total from last season.

But Westbrook missed a free throw that would have tied the score with 3:53 remaining, and Houston never got over the hump against the Greek Freak's supporting cast.

"It's not about our offense," Westbrook said. "When we lose games, it's about our defense. We focus and pride ourselves on doing that, and we've got to do a better job of that, starting with myself."

That's hard to argue despite one of Harden's worst shooting nights of the two-time scoring champion's tenure in Houston.

After all, Milwaukee managed to score 16 points in the final 3:53 despite the absence of Antetokounmpo, the man the Bucks count on to carry them offensively.

Khris Middleton, the All-Star a season ago who struggled shooting for most of the night, hit a momentum-halting 3 immediately after the Rockets pulled within a point. Brook Lopez, the big man who earned his "Splash Mountain" nickname because of his late-career metamorphosis into a 3-point specialist, went old-school in punishing smaller Houston defenders in the post, scoring all 11 of his points in the fourth quarter and six in the final 3:14. Ersan Ilyasova and Wesley Matthews, a couple of veterans the Bucks hope can knock down the big shots Milwaukee missed in the Eastern Conference finals last spring, combined to swish three long jumpers in the final couple of minutes.

"These guys in this locker room, we're fighters, we're competitors," said Matthews, a Milwaukee native who scored 12 of his 14 points in the second half and was frequently the primary defender on Harden during his Bucks debut. "If Giannis fouls out, we can't just come into the locker room. He left everything out on the court for us.

The Bucks finished the job despite an 0-2 MVP disadvantage down the stretch. It's only one game, but it's the kind of win that strengthens the Bucks' belief that bigger accomplishments are within their reach than just the NBA's best regular-season record.

"The chemistry is amazing," Antetokounmpo said. "We need to keep working on that, and you're going to find adversities throughout the season. But at the end of the day, you've got to face moments like this because moments like this make you better." 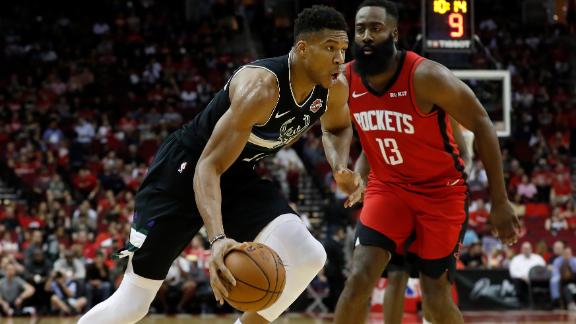 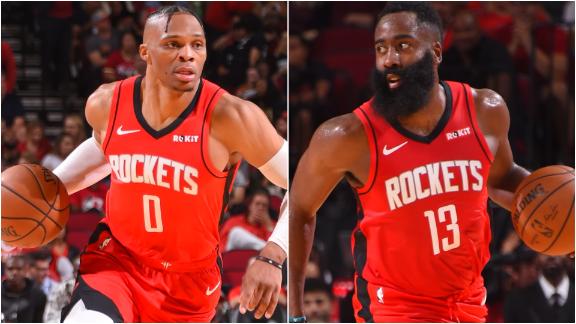 Harden, Westbrook come up short in opener vs. Bucks
James Harden and Russell Westbrook shoot a combined 9-for-30 from the field as the Rockets fall in their home opener to the Bucks 117-111.
Report a correction or typo
Related topics:
sportsespnjames hardenhouston rocketsmilwaukee bucksrussell westbrookgiannis antetokounmponba
Copyright © 2020 ESPN Internet Ventures. All rights reserved.
More Videos
From CNN Newsource affiliates
TOP STORIES