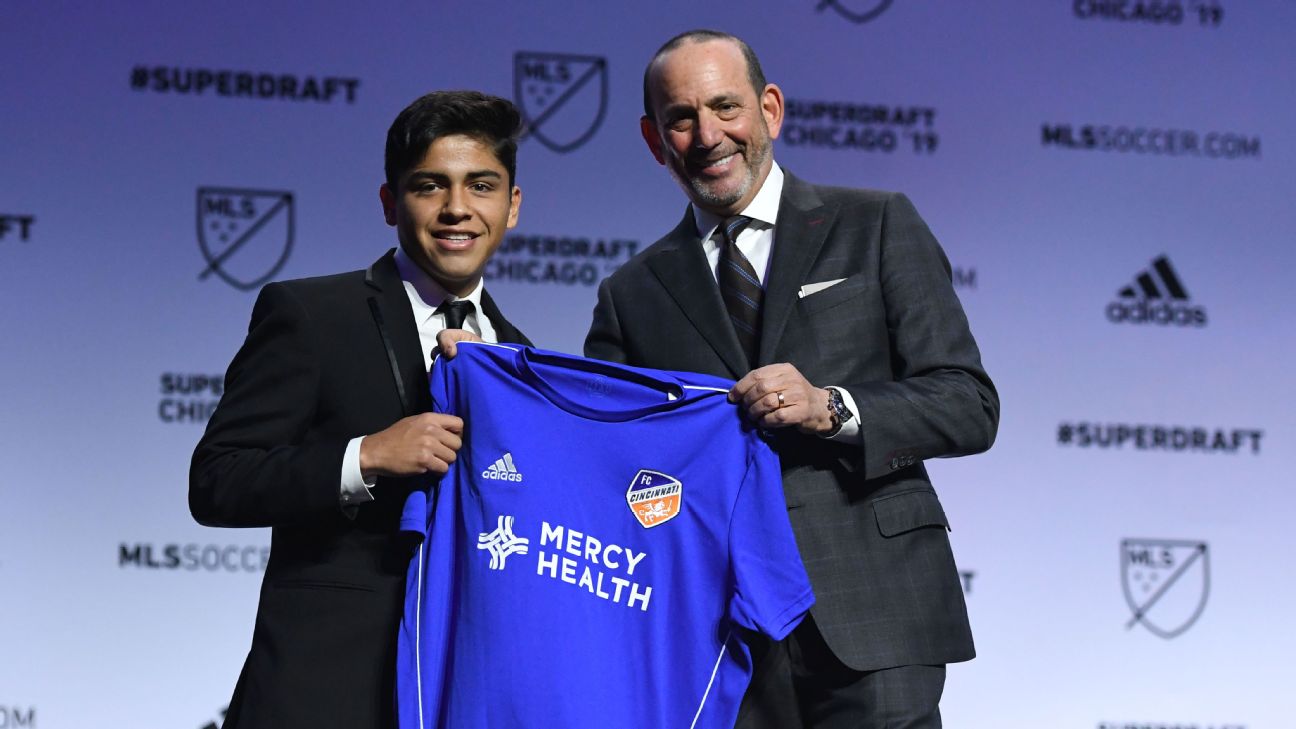 "This is what I worked my whole life for," Amaya told MLSSoccer.com at the draft in Chicago. "This is a crazy moment."

Amaya, 18, is the youngest player in the draft, but his upside is such that he's expected to adapt well to the professional game, even in a central playmaking role that is usually the domain of foreign players.

However, it was with the U.S. under-20 team that the native of Santa Ana, California, has drawn the most attention, helping the U.S. qualify for the FIFA U20 World Cup late last year.

He missed the MLS draft combine this week due to commitments with the U20s and some hamstring tightness, but his absence did little to hurt his stock.

If Amaya makes the final U20 World Cup squad, he'll miss a chunk of the MLS season, as the tournament is set to start in late May. The experience, however, could not only aid his development but provide a platform for clubs around the world to scout him.

Amaya also dual citizenship in the United States and Mexico, which means he could be sold on for a hefty fee to a club in Mexico's Liga MX if he performs well.

The round then took on a familiar feel, with the Generation Adidas players -- those who left college early and won't count against a team's salary cap -- getting taken quickly, with six of the seven picks in the top 10.

Virginia Commonwealth midfielder Siad Haji was selected by the San Jose Earthquakes with the No. 2 pick.

"Being here is just a blessing, I'm short of words," Haji said in an interview with MLSSoccer.com.

Indiana University forward Griffin Dorsey went to Toronto FC at No. 6, while University of Maryland goalkeeper Dayne St. Clair was chosen by Minnesota United with the seventh pick. In between Haji and Dorsey, Orlando City selected Florida International University forward Santiago Patino with the No. 3 pick, and FC Dallas followed by taking UNC-Charlotte center-back Callum Montgomery. University of Denver forward Andre Shinyashiki will stay close to home after being chosen by the Colorado Rapids with the No. 5 pick, a selection the Rapids acquired from the Chicago Fire in exchange for $100,000 in allocation money.

One of the bigger surprises was Generation Adidas signee Tajon Buchanan of Syracuse University -- who was thought to be a candidate for the No. 1 overall selection -- sliding down to No. 9, where he was snapped up by the New England Revolution, while fellow GA signee and North Carolina defender John Nelson was taken by FC Dallas at No. 10. The final GA signing, University of Kentucky forward JJ Williams, was taken by the Columbus Crew with the 18th pick.

Cincinnati entered the draft with 10 picks in its bag across the four rounds, and managed to acquire Wake Forest right-back Logan Gdula with the No. 13 pick. The Revs, in addition to acquiring Buchanan, also snapped up Michigan State attacker DeJuan Jones with the 11th pick, giving New England good value for the second selection in a row.

The first round served to illustrate the decreasing value of draft picks, however. No longer are first-round selections expected to make an immediate impact. Many are expected to be farmed out to reserve teams or affiliates in the second-tier USL. That was reflected in the decrease in allocation money that changed hands in this year's first round compared to last. Trades for first-round picks in the 2019 draft yielded around $500,000 in allocation money, compared to $800,000 a year ago.

Teams are also more inclined to give the benefit of the doubt to academy products they've spent years developing as opposed to those who went the college route. Prior to the draft, the Philadelphia Union traded all of their picks -- including four second-rounders -- to FC Cincinnati for $150,000. FCC made some of that back by packaging a pair of picks, the Nos. 16 and 25 picks overall, to the New York Red Bulls for $100,000 in GAM.

"There always will be a role for players not developed in our academies," MLS commissioner Don Garber told reporters following the first round. "That is what today is all about."

Rounds 3 and 4 will take place beginning Monday at 1 p.m. ET via conference call.