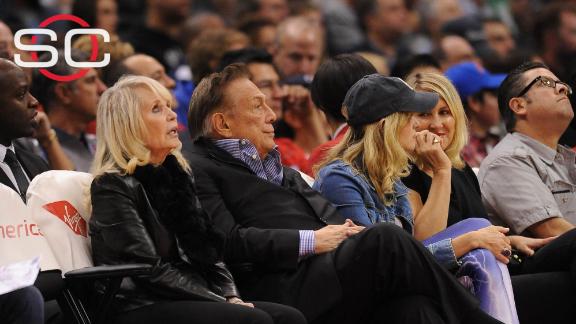 LOS ANGELES -- Former Los Angeles Clippers owner Donald Sterling filed for divorce from his wife of nearly 60 years Wednesday as he continues to battle her over ownership of the team.

Sterling, 81, cited irreconcilable differences in paperwork submitted to the Los Angeles Superior Court, attorney Bobby Samini said. That paperwork was initially rejected by the court as incomplete, but it was corrected and resubmitted. It lists their date of separation as Aug. 1, 2012.

Sterling also filed a petition in probate court Wednesday for an accounting and distribution of assets related to the $2 billion sale of the Clippers to ex-Microsoft CEO Steve Ballmer, claiming he had a right to half of the community property, according to the court documents.

Attorney Pierce O'Donnell said Shelly Sterling had no comment and had not seen either court filing.

Donald Sterling is suing his wife and the NBA in federal court over the sale of the team. Shelly Sterling negotiated the deal with Ballmer after doctors found Donald Sterling incompetent to handle his business affairs.

Shelly Sterling told ESPN in April that she has been able to collect only her half of the record $2 billion sale of the franchise. The other billion is frozen until Donald Sterling signs off on the sale and drops his litigation against the NBA. Of the $1 billion that was transferred to the Sterling family trust, which she has control over, Shelly Sterling estimated she had paid out $600 million in taxes and legal fees.

Samini told ESPN on Wednesday that he has asked for a full accounting of the proceeds of sale.

"There's still a billion from the sale that hasn't been transferred," Samini said. "We want to know where the money went. A billion is a lot of money. We want to know who was paid what after the closing of the escrow. She may have paid the taxes. We haven't seen any evidence of that.

"It's clearly an unfortunate situation," Samini said, "but my client can't continue to sit by while his rights are trampled."

The two filings come two weeks before the couple's 60th anniversary and about four months after a judge ordered V. Stiviano -- a woman whom Shelly Sterling alleged was her husband's mistress -- to turn over the keys to a $1.8 million house that Donald Sterling bought her and to pay Shelly Sterling about $800,000 that her husband showered on Stiviano in cash, a Ferrari and other luxury vehicles.

The ruling came nearly a year after a recording of Donald Sterling telling Stiviano not to associate with black people led the NBA to ban him for life and fine him $2.5 million. The recording was leaked weeks after Shelly Sterling sued Stiviano, alleging she was her husband's mistress.

While Shelly Sterling acknowledged marital problems, she said the couple never separated, even though she had divorce papers drawn up.

"We're in each other's lives, and we probably always will be," Shelly Sterling said in April. "We're together sometimes, and sometimes not together."

The couple testified at trial in March in Los Angeles Superior Court about their enduring love for each other, displaying cards they gave each other for anniversaries and birthdays.

Information from ESPN.com's Ramona Shelburne and The Associated Press was used in this report.