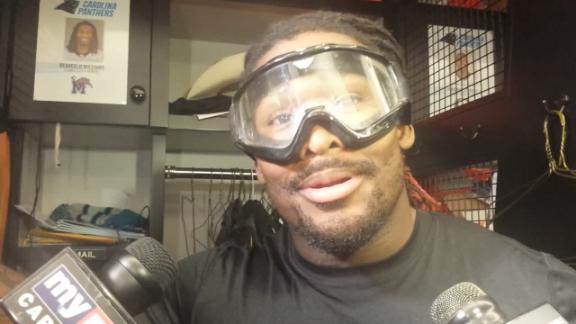 Here's why: After being cut by the Panthers in March, Smith told a Charlotte radio station that if he happened to face Carolina, "Put your goggles on, 'cause there's going to be blood and guts everywhere.''

That meeting happens at 1 p.m. Sunday at M&T Bank Stadium. But does Williams really expect blood and guts?

"I wouldn't say that,'' he said. "It's a football game. That sounds more like surgery when you say blood and guts. I'm an Eric Dickerson fan. That's why I have the goggles on.''

Hall of Fame running back Dickerson did wear prescription goggles during the 1984 season, the year he rushed for 2,105 yards to set an NFL single-season record.

But the goggles Williams wore were nearly three times the size of Dickerson's, and they weren't prescription.

"I just happened to have a pair around,'' Williams said with a laugh. "I've used them in the past, but it wasn't for blood and guts. It was to keep mud out of my eyes when I'm on my ATV. But they're good for multiple occasions.''

In other words, they were meant for Smith, Carolina's all-time leading receiver.

"[Steve] kind of left us a message the first game of the season, so I'm looking forward to it,'' Williams said of facing Smith.

Williams' reaction to the message, obviously intended for the Panthers (2-1) since they are Baltimore's Week 4 opponent?

"I spent eight years with Steve, and I know how fiery he is, and I know how good the Ravens are,'' he said. "We'll all know the answer to the end of that message come Sunday.''

Williams is more excited about being on the field after missing the last two games with a hamstring injury than he is worried about blood and guts.

He's practiced in full the past two days and says he's ready to give a spark to a Carolina running game that has failed to reach 100 yards on the ground the past two weeks.

The Panthers are averaging 72.3 yards rushing on the season after averaging 126.6 yards a year ago.

The return of Williams should help, particularly with Jonathan Stewart (sprained knee) doubtful and Mike Tolbert (fractured leg) out.

"I'm very encouraged,'' Williams said. "I've got everything that I need. I've got my shoulder pads, I've got my helmet, I've got my game socks, shoes and my goggles.''

Whether the goggles will be a part of his Sunday uniform remains to be seen.

Steve Smith Ready For The Panthers
ESPN NFL Insider Ashley Fox talks about what to expect from Steve Smith when he faces his former team on Sunday.

Inside Edge: Panthers-Ravens
ESPN NFL Insider Mike Sando delivers stats to help you make a pick for Carolina at Baltimore.