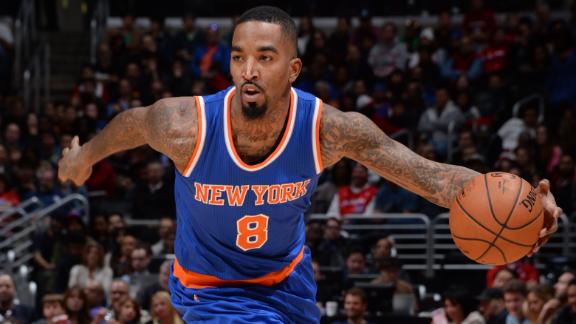 The Cavs are attempting to bolster their bench with the trade by adding Smith, a mercurial shooter, and Shumpert, who specializes in wing defense that the Cavs badly need. The Knicks had been attempting to trade both for some time.

Shumpert is currently out with a dislocated shoulder he suffered last month.

Team officials spoke with LeBron James about his willingness to play alongside Smith before executing the deal, sources said.

"We wish Dion the best as he continues his career with the Thunder and thank him for his effort and work here with the Cavaliers," Cavs general manager David Griffin told reporters Monday night. "Dion is a talented player with potential ahead of him. Trades like this are always difficult to make because there are relationships and bonds built, and that was the case with Dion.

"At the same time, we're very excited to welcome Iman and J.R. to Cleveland. With their size and versatility, we think both Iman and J.R. can help our team on both ends of the court, and we look forward to them joining us."

The Thunder, who used a trade exception to execute the deal, gain the offensively talented Waiters, who had struggled to fit at times over the past two-plus seasons. With Waiters, the Thunder are adding some scoring off the bench and providing insurance for Reggie Jackson, their standout guard who is in the final year of his contract.

"I'm excited about bringing Dion aboard," reigning league MVPKevin Durant told reporters Monday night. "A guy that has a lot of toughness. Being from the East Coast, I know a lot about Philadelphia, South Philly, where he comes from. Those guys are tough, and they play with an edge. And that's what we need here.

"Just knowing him from playing against him. We're gonna make him feel wanted. I don't think he felt that the last couple years. He's gonna fit in well. He's gonna get comfortable real quick. It's on the leaders -- Russell [Westbrook], myself, Nick [Collison]-- to make him feel at home and feel special and let him play his game."

This trade for the Knicks was financially motivated for both short and long term. They have the option to waive all three players they traded for by Wednesday and not owe them anything.

The Knicks also waived center Samuel Dalembert, a move that will save $3.8 million. In all, the moves to unload Shumpert, Smith and Dalembert will save the team more than $20 million in salary and luxury taxes.

"As our journey moves through this season, we will search for the type of players that fit the style we hope to exhibit to our fans. Our desire to improve our ability to compete," Knicks team president Phil Jackson said in a statement."These transactions improve our flexibility to the current roster and the salary cap for future seasons."

With Smith's $6.4 million player option for next year now off their books, the Knicks are looking at having in excess of $30 million in cap space next summer. Smith gets a $533,135 trade kicker bonus as part of the deal.

"This was an impactful night in terms of, first, the three guys who are not with us anymore," Knicks coach Derek Fisher told reporters Monday night. "I spoke to each of them before the game. I told them how much I and we appreciate the efforts made in this transition process. Trying to learn what we were offering, what we were teaching. All three guys made the effort to do so.

"Especially in this league now, guys with expiring contracts, they don't necessarily have possibly a long-term future. I think Phil is continuing to look at how we transition as we change the culture of the New York Knicks."

Fisher then said that he doesn't think the Knicks are finished making moves.

"I don't think this is the end of this process," Fisher told reporters. "Although right now we're losing some pieces I'm hopeful that our front office is still being very aggressive to try to add some guys that can help us build this team going forward."

Shumpert, 24, averaged 9.3 points, 3.4 rebounds and 3.3 assists for the Knicks this season. He will be a restricted free agent next summer.

All three teams lost on the road Monday night with the Cavs falling at lowly Philadelphia, the Knicks losing in Memphis and the Thunder stumbling at Golden State.

Waiters, a Philadelphia native, was pulled from the team's lineup Monday night.

"We didn't find out until it was time to go out there for the jump ball," Cavs forward Tristan Thompson said after Cleveland's Monday night loss. "So we said our 'see you laters, not goodbye' because you're going to see them down the road. So, see you later and wished them all the best, but we know we got a game to play and we can't stop. We got to keep pushing. We got to keep moving forward."

Cavs, Thunder And Knicks Complete Six-Player Trade
Tim Legler discusses the trade that sends Dion Waiters to the Thunder, J.R. Smith and Iman Shumpert to the Cavaliers and several players with nonguaranteed contracts to the Knicks.

Waiters Makes Thunder Better
Tim Legler broke down how the Thunder's acquisition of Dion Waiters makes them a title contender.

What's Next For The Knicks?
The "NBA Tonight" crew discussed the Knicks' future