Cam Newton out vs. Buccaneers 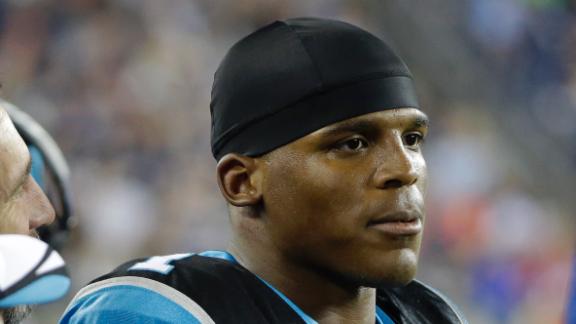 Newton was listed as inactive for the first time in his career.

Derek Anderson, a backup for Carolina since Newton was the first overall pick of the 2011 draft, will make his first start since December 5, 2010 while with the Arizona Cardinals.

The Panthers didn't want to run the risk of further damaging Newton's ribs, which were fractured when New England Patriots linebacker Jamie Collins kneed him in the back at the end of a 7-yard run in the third exhibition game.

Panthers coach Ron Rivera previously had said that Newton, who was a full participant in Friday's practice, would be a game-time decision for Sunday's contest.

"There's some things you can't measure, and that's how he'll react when he gets hit," Rivera said Friday. "So when we make our decision Sunday morning, it's going to be based on how we feel he's done the last couple of days, how he feels in terms of handling what we want to do with the game plan and whether or not we believe he'll be able to protect himself if he takes a shot."

Newton did not practice Wednesday and was limited Thursday but did take all the repetitions during installation of the game plan.