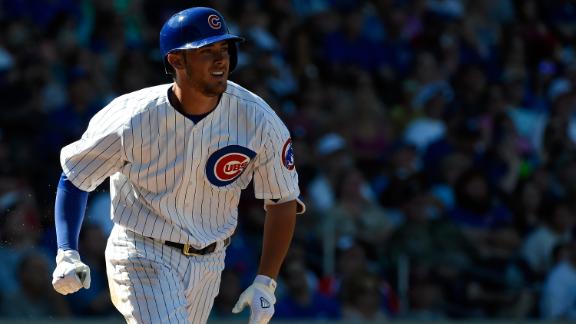 Boy, I hope this thing's sturdy.


It's my first thought anytime I hear the phrase: "Let's go out on a limb."


Well, OK, but I had a bacon cheeseburger for lunch and I've been lax on my jogging this month. Is this really a good idea?


It's the conservative fantasy baseball planner in me speaking, the one who puts meticulous time into my rankings, projections and dollar values, striving to find the most probable outcome for each and every player. You want high-probability outcomes, not wild claims without research basis.


But aren't those wild claims the fun ones? Aren't they the ones that in the end ultimately decide fantasy leagues?


We all have our stories, like the time our free-agent pickup wound up fantasy baseball's 14th-best overall pickup en route to a Cy Young Award. Or when our second-round pick who had appeared in every game the previous three seasons unexpectedly missed the final four months. Or when that 14th-rounder of ours who no one else seemed to want led the majors in home runs, propelling us to our league's titles.


Oh, wait, that was last year, when Corey Kluber, Prince Fielder and Nelson Cruz were those respective players. And that's the point of what follows here: Even the least expected outcomes have a nonzero probability of actually occurring. Recognizing that they're there is often the most overlooked part of any fantasy owner's preseason analysis.


So let's be bold; let's go out on a limb, if you will. Listed below are more than 50 bold predictions for 2015, which identify these lower-probability -- yet entirely possible -- outcomes for certain players.


To be clear, these are not guarantees to happen and they are not the kinds of predictions I'm using to drive my draft-day valuations. They are, however, educated guesses that I'm keeping tucked away as I build my teams. Use them however you wish: to drive your value-picks lists, as fun debate topics during your own fantasy baseball drafts, or simply as an opportunity to reply in the comments beneath: "Tristan, you're out of your mind."


Yasiel Puig will win the National League's MVP award. Considering that in 2014 he had minus-2 defensive WAR, 2 Defensive Runs Saved and a minus-2.3 Ultimate Zone Rating -- meaning he was effectively a league average to slightly below-average defender -- think about what that means in terms of his offense.


This will be the first season since 2009 that Troy Tulowitzki plays in at least 145 games.


Freddie Freeman will finish the season one of the 10 highest-scoring hitters, using ESPN's standard points-league settings.


Remember those 80-steal expectations that optimistic fantasy owners had for Billy Hamilton? This season they'll come to fruition, as he steals at least 25 more bases in 2015 than in 2014, making him the first player to reach the 80-steal plateau since Vince Coleman and Rickey Henderson in 1988.


Kole Calhoun will lead the majors in runs scored.


While everyone claims he'll miss time due to injury, Johnny Cueto will make another 30-plus starts and finish among the top 10 starters on the Player Rater for the second consecutive season.


Cueto will also complete said season with the Cleveland Indians, getting traded there in the final week of July and making him by far the biggest AL-only league FAAB prize of 2014. Better yet: The Indians will land him without having to surrender top prospect Francisco Lindor.


Masahiro Tanaka will finish higher on the Player Rater than he did in 2014; he was the No. 27 starting pitcher and No. 116 player overall last season. In fact, he'll make at least 25 starts, five more than last season.


Yan Gomes will lead all catchers in home runs.


Among the 68 pitchers who made at least 30 starts in 2014, Kyle Gibson will enjoy the largest increase in strikeouts, adding at least 40 to his total.


Brett Cecil will finish higher among relief pitchers on the 2015 Player Rater than Jake McGee did in 2014 (that's 15th, incidentally).


Evan Marshall will save at least 30 games for the Arizona Diamondbacks.


Despite beginning the season in the bullpen, Kevin Gausman will be the highest-rated Baltimore Orioles pitcher on our Player Rater. Yes, that includes the closer, Zach Britton.


Josh Donaldson will hit at least 35 home runs for the Toronto Blue Jays. Yes, it's an old, bold call: I made this one in December, but in case you missed it, here's a recap.


Jeurys Familia will lead the New York Mets in saves.


Ryan Braun will stay healthy and exceed every one of the five Rotisserie categorical contributions we've projected for him.


More Orioles: Chris Davis will finish in the top five in baseball in home runs . . . and the bottom five in (qualified) batting average.


Matt Shoemaker's ERA will rise by at least one run.


The Houston Astros won't declare a closer when breaking camp, but internally they'll have decided upon "their guy," and that individual will finish among the Player Rater's top 10 closers. His name: Luke Gregerson.


The Boston Red Sox's team leader in saves in 2015 will be a pitcher who is not currently on the roster. Sorry, Koji Uehara owners.


The American League's Rookie of the Year will be a member of the Blue Jays, but it will be neither Aaron Sanchez nor Daniel Norris. Instead, it'll be their starting center fielder, Dalton Pompey.


Alex Guerrero will finish higher on the Player Rater than a fellow Cuban import playing in the National League West, Yasmany Tomas.


He'll cost you a ninth-round pick in ESPN standard leagues, but Dee Gordon will finish outside the Player Rater top 100. Meanwhile, Micah Johnson will go at least 15 rounds later, but will finish within 20 spots of Gordon overall on the final Player Rater.


Ricky Nolasco will finish higher on the Player Rater this season than Minnesota Twins rotation mate Ervin Santana. It's a minimal-impact one, I know, but it's also a legitimate home-league "board bet" I've got with a fellow owner.


Joey Gallo will have a Kevin Maas-esque -- or, for those with more recent memories, Tino Martinez's May 2005 -- major league debut in his first two weeks in August, but then he will do positively nothing else for his fantasy owners the remainder of the year, other than ruin their teams' batting averages. (Handy hint: Trade him after a week's worth of gift home runs.)


Michael Taylor will finish higher on the Player Rater this season than Steven Souza.


Take this, workload worriers: Madison Bumgarner will finish exactly ninth among starting pitchers on our Player Rater for the third consecutive year.


Jered Weaver will be the first pitcher to win 19-plus games despite a 4.00-plus ERA since Andy Pettitte in 2003 (21 wins, 4.02 ERA). Just so you don't misread that as a glowing fantasy endorsement: Besides his wins total, Weaver's contributions in the four other primary Rotisserie categories (ERA, WHIP, K's and saves) will all rank outside the top 40.


At the end of the year, fantasy owners will look at the final Player Rater and ask: "Boy, how did Rick Porcello wind up a top-30 starter?" He'll be that productive, and few will have even noticed while it was happening . . . kind of how Phil Hughes did the same in 2014.


Jason Hammel will be the National League's such pitcher.


Shane Greene will strike out 180 batters.


Both A.J. Pollock and Steve Pearce will finish higher on the Player Rater than Carlos Gonzalez.


At season's end, Arismendy Alcantarain ESPN standard leagues will possess eligibility at second base, third base, shortstop, left field and center field (for those who use separate outfield positions). That might not sound like a prediction, but considering he's only second-and-center (or just "outfield") eligible today, think about what kind of year he'd need to have to gain at least 10 games at all of those spots.


Bryce Harper won't enjoy the kind of season-long breakthrough that has fantasy owners abuzz, but he'll be a top-25 finisher on the Player Rater, and will be the game's most productive player the final six weeks of the season, setting himself up for a first-round ranking entering 2016.


Ben Zobrist won't reach double digits in either home runs or stolen bases, yet he'll still find his way into the final Player Rater top 200. (How does he do that?!?!)


At season's end, Miguel Sano will have more home runs and a higher Player Rater finish than Trevor Plouffe, despite having fewer plate appearances.


Robinson Cano will not only mount a challenge to his career high of 33 home runs, he'll also lead the American League in batting average.


Though he'll fall short of Cano's final total in the category, Jedd Gyorko will finish second among second basemen in home runs.


In this, their 47th season of existence, the San Diego Padres will finally get their first no-hitter: It'll be thrown by Tyson Ross.


This one's for my colleague and friend Eric Karabell: Dan Uggla will hit at least 20 home runs and make at least half the starts at second base for the Washington Nationals.


Justin Upton will set a personal best in home runs despite playing half his games at Petco Park. His career high is 31, set in 2011.


Javier Baez won't be back with the Chicago Cubs before Sept. 1.


Avisail Garcia will finish higher on the Player Rater than a fellow player with his initials "A.G.":Alex Gordon.


I once did this prediction upon request before the start of the 2010 season, and got the correct answer (Jason Heyward), so why not give it another try? The first home run of 2015 will be hit by Anthony Rizzo. He will hit at least 36 more.


And finally, because everyone loves plain old World Series predictions, here's mine: Cleveland Indians over Washington Nationals in seven games.