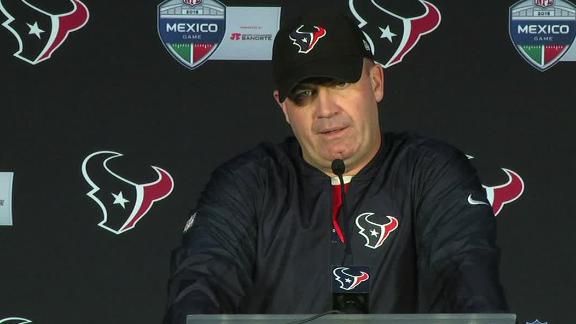 MEXICO CITY -- Houston Texans coach Bill O'Brien expressed his displeasure with the officiating in his team's 27-20 loss to theOakland Raiderson Monday night, focusing on an out-of-bounds ruling after a catch that likely would have gone for a touchdown.

"I considered challenging many of the plays today," O'Brien said. "I'm not going to sit up here and get fined. I'm just a third-year coach in the NFL. But I think they really have to look at all those things. We've got all these cameras. We can't get that right?"

In the first quarter, quarterback Brock Osweiler hit receiver DeAndre Hopkins for a long pass, but Hopkins was ruled out of bounds at the Oakland 36-yard line.

The play was blown dead, even though it appeared Hopkins was not out of bounds and would have scored a touchdown.

"Was Hopkins out of bounds on that play? No," O'Brien said.

The Texans had to settle for a field goal on the drive.

In the fourth quarter, with the score tied at 20, the Texans had a third-and-2 at the Raiders' 16-yard line. The officials gave the Texans 1 yard on aLamar Millerrush over the left end in which he was pushed out of bounds, though the broadcast appeared to show Miller gained enough yards for the first down.

Then on fourth down, it appeared running back Akeem Huntgained the 1 yard needed for the first down, but officials ruled he did not. O'Brien challenged the play, but the ruling on the field stood.