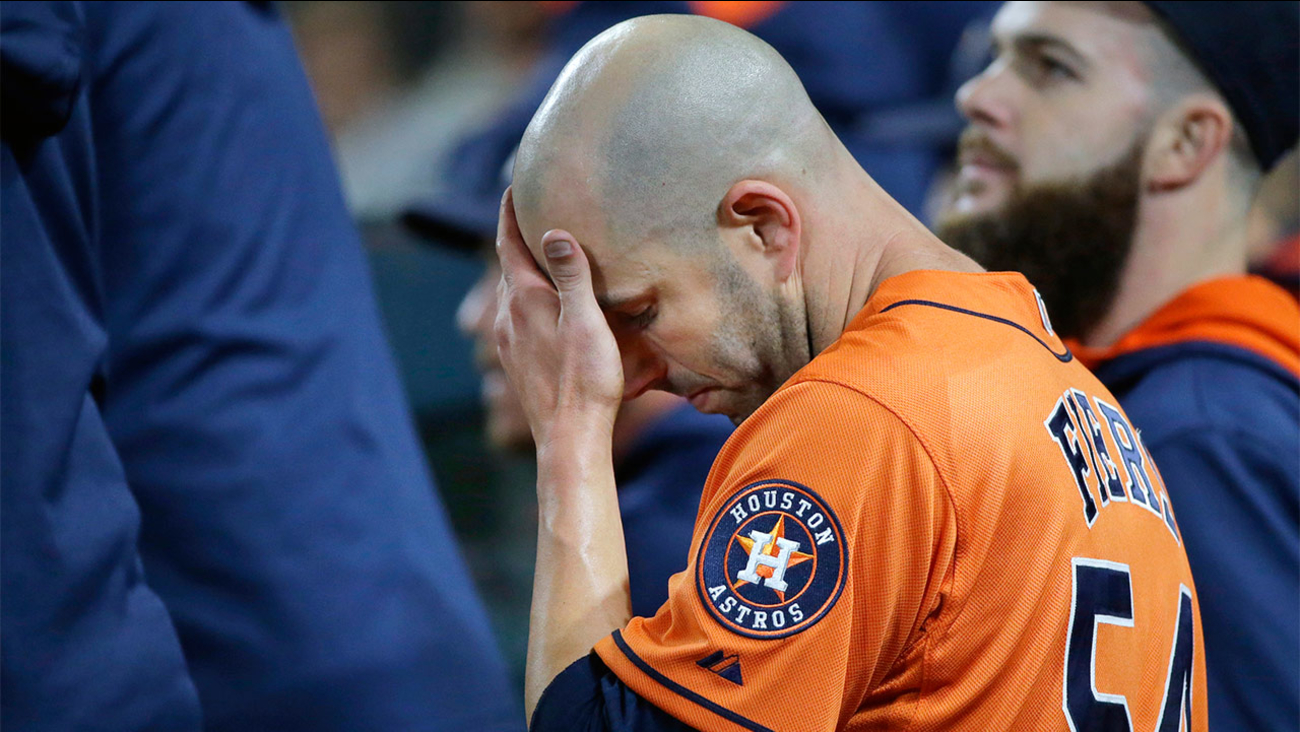 Houston Astros starting pitcher Mike Fiers wipes his brow in the dugout after being pulled from a baseball game against the Seattle Mariners in the sixth inning, Tuesday, Sept. 29, (AP Photo/Ted S. Warren)

It came at the right time of the game, but the wrong time of the season for the Seattle Mariners.

His homer tied the game, and rookie Shawn O'Malley followed in the eighth with a two-run, bases-loaded single to put a dent in Houston's postseason aspirations with a 6-4 victory that ended Seattle's six-game losing streak.

The Mariners, eliminated from the playoffs for the 14th straight season last week, dropped the Astros out of the second spot in the American League wild-card chase.

The Los Angeles Angels, 8-1 winners over Oakland on Tuesday, passed Houston with four games remaining. The Angels join the New York Yankees, who lost to Boston 10-4, as the top wild-card teams.

As for the AL West race, division-leading Texas beat Detroit and has a two-game lead over the Angels and 2 1-2 over the Astros.

The Astros led 4-2 entering the Mariners' sixth when Cano hit his 20th home run, a two-run, two-out shot off Mike Fiers that tied the game.

"We're just not getting it done," Fiers said. "We had the game right there, with the lead. I just needed one more out to get out of the inning and keep the momentum going. Cano jumped me on the first pitch, put on a good swing, hit it out.

"You don't want to throw a fastball down and in to Robinson Cano," he added. "I was trying to go away."

It also extended Cano's hitting streak to 12 games, the longest current streak in the AL.

"Not a surprise to me," Mariners manager Lloyd McClendon said. "I said all along that Robby would hit to the back of his baseball card and he has. ... And he's not done yet."

Can, who signed a 10-year, $240 million contract a year ago, had a slow start to the season, hitting just .251 through the All-Star break. Consequently, the Mariners were 41-48 at the break.

Seth Smith started the winning rally with a two-out single to right off Perez. Mark Trumbo singled off Pat Neshek and Franklin Gutierrez walked. O'Malley then lined a 2-2 pitch from Neshek over second base.

"Edgar (batting coach Edgar Martinez) gave me a good scouting report and told me things to look for," O'Malley said. "So I went up there with a game plan, stuck with it and it paid off."

George Springer had three hits for the Astros, and Marwin Gonzalez hit his 12th home run.