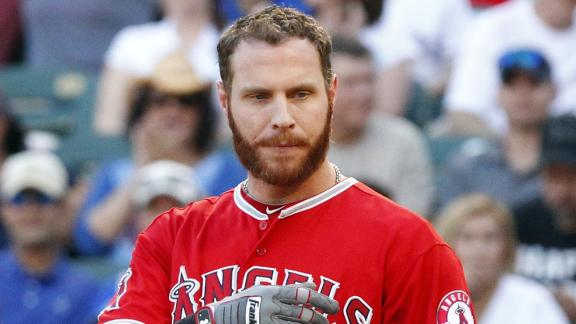 
MLB said it disagreed with the decision made by an arbitrator appointed under its joint drug program with the players' association. MLB said in a statement it "will seek to address deficiencies in the manner in which drugs of abuse are addressed under the program in the collective-bargaining process."


Angels team president John Carpino and general manager Jerry Dipoto sided with MLB and were upset that the league is unable to take any steps to reprimand Hamilton.

"It defies logic that Josh's reported behavior is not a violation of his drug program," Carpino said Friday.


Before the team's exhibition game against the Dodgers on Friday night, Dipoto added, "Do I agree with the decision that was made by the treatment board? Absolutely not."


Hamilton, the 2010 AL MVP, is subject to the treatment program for prior violations involving drugs of abuse.


The five-time All-Star, who signed a five-year, $125 million contract with the Angels in December 2012, self-reported a violation this year after he suffered a relapse involving the use of cocaine and alcohol in the offseason, according to an ESPN source and media reports. He met with MLB officials in New York in early March as a precursor to possible disciplinary action.


MLB said it took "the position that Hamilton violated his treatment program and is subject to discipline by the commissioner."


A four-person treatment board created by baseball's joint drug program, which includes one lawyer and one medical representative each appointed by management and the players' association, deadlocked 2-2 on whether Hamilton should be disciplined. That caused the need for an arbitrator to break the tie.

A person familiar with the process said the arbitrator was Roberta Golick, a former president of the National Academy of Arbitrators. That person spoke on condition of anonymity because her name was not announced.


A hearing was held before Golick, and Hamilton was represented by lawyers Jay Reisinger and Tina Miller. The arbitrator said only that Hamilton was not subject to discipline and did not give reasons for the decision, the first person familiar with the case said.


Dipoto also issued a statement Friday saying that, while the team is disappointed in Hamilton's conduct, it will try to help him moving forward.


"The Angels have serious concerns about Josh's conduct, health and behavior and we are disappointed that he has broken an important commitment which he made to himself, his family, his teammates and our fans," Dipoto said in the statement. "We are going to do everything possible to assure he receives proper help for himself and for the well-being of his family."


The Major League Baseball Players Association said in a statement that it will "respect the integrity of the negotiated joint drug agreement process and protocols, as well as any decisions that are the result of that process."


Hamilton, who turns 34 in May, has a well-documented history of substance-abuse problems dating to his days in the minor leagues, when he was suspended from baseball from February 2004 to June 2006 for issues related to cocaine and alcohol addiction.


"We've really got to get Josh the help that he needs," Carpino said. "That's where the focus is. We're dealing with a person here."


One of the conditions of Hamilton's reinstatement in 2006 was that he undergo drug testing three times a week. He had alcohol relapses in 2009 and 2012 but recovered to win the MVP award with the Texas Rangers in 2010 and appear in consecutive World Series in 2010 and '11.


When asked how Hamilton might perceive the Angels' comments about the ruling, Dipoto pointed out that the team has been actively supportive of Hamilton ever since it signed him. Hamilton has had two "sober coaches" to monitor his behavior, just as he did with the Rangers, and the Angels claim they have expended extensive resources to keep the outfielder safe.


"But we're not going to sugarcoat issues that exist with our team as we move forward," Dipoto said. "And to me, that's the important element not to forget here. We have a team to focus on. ... We have a responsibility to a group of guys down there that have committed to winning, and we're going to go out there and show our support for that group as well."


Dipoto said he hadn't spoken with Hamilton on Friday, but only with the outfielder's representatives.


Hamilton played in just 89 games for the Angels because of injuries and struggled at the plate throughout last season, culminating in an 0-for-13 performance in the Angels' three-game loss to Kansas City in the AL Division Series. He has managed just 31 homers and 123 RBIs in two seasons with the team.


After resting his ailing right shoulder throughout the offseason, Hamilton had surgery in February that will prevent him from playing until at least May.


He never reported to spring training in Tempe, Arizona, instead pursuing his surgery rehabilitation at home in Houston with the Angels' blessing.


Manager Mike Scioscia and his players have been outspoken in support of Hamilton, but the club also has removed his oversized photo from the outside of Angel Stadium for this season, taking him out of the group of six star players annually honored.


"I think it's great for Josh, obviously," said Wilson, who was Hamilton's teammate for four seasons with Texas before they were reunited in Anaheim two years ago. "That gives him just a very straightforward, linear path to coming back. All he's got to do now is just focus on getting healthy. There won't be any other obstacles, which I think is a good thing. We see the drug testers in here all the time, and he probably gets tested as much as the rest of our team combined, if you think about it. He gets tested three times a week -- and that's all year round.


"Josh came forward, and he admitted fault," Wilson added. "I think that's a very manly thing to do in this day and age when everyone's trying to cover up stuff and buy people off and things like that in similar circumstances. I think that just shows that Josh understands that he's under the microscope."


Hamilton's locker in the clubhouse is temporarily occupied by new second baseman Johnny Giavotella during the weekend exhibition series.


"We're all thinking about Josh and praying for him," Angels third baseman David Freese said. "But when it comes time to play ball, we're worried about who's in this clubhouse. Not having a talent like Josh when he's rolling is huge, but there's a group of guys in here that are determined to get it done and win the division again."


Hamilton was the first pick in the 1999 amateur draft out of Athens Drive High School in Raleigh, North Carolina, but his surge through the minors was sidetracked by substance abuse beginning in 2001.


He barely played baseball for four years, but found stability off the field with sobriety counseling, a wife and a family that now includes four children.


A year after resuming his career in the minors, he ended up with the Reds in 2007, getting a long standing ovation when he made his major league debut. He had 19 homers and 47 RBIs as a rookie, and Cincinnati traded him to Texas in the offseason.


He was an immediate hit with the Rangers, leading the league with 130 RBIs and earning a starting spot in the All-Star Game in 2008. He won the AL batting title in 2010, and he was selected the AL Championship Series MVP while leading the Rangers to their first World Series appearance.


But even during his success, Hamilton had problems. He acknowledged a relapse in early 2009 after he was photographed getting drunk in a bar in Arizona, and he held a news conference in 2012 to apologize for another night of drinking.


After playing in a second World Series in 2011, Hamilton had a career-best 43 homers and 128 RBIs in 2012 despite injury problems and a late-season slide.


The Angels risked an enormous contract on Hamilton to add his left-handed bat behind Mike Trout and Albert Pujols, but Hamilton has provided only short stretches of the world-class hitting expected -- and now he has become the distraction long feared by the contract's detractors.


"This is a disappointing moment, make no mistake," Dipoto said. "We'll move forward, we'll make the best of it, and we'll try to find and reach a conclusion that makes sense for all involved. That will happen when it happens. We're in no rush. Josh is going to start on the disabled list, and we'll take it day by day."


Jerry Crasnick of ESPN.com and The Associated Press contributed to this report.

Kurkjian not shocked by Hamilton ruling
Tim Kurkjian reacts to the news that an arbitrator has ruled that Angels OF Josh Hamilton can't be disciplined by Major League Baseball for his latest problems involving alcohol and a drug of abuse.