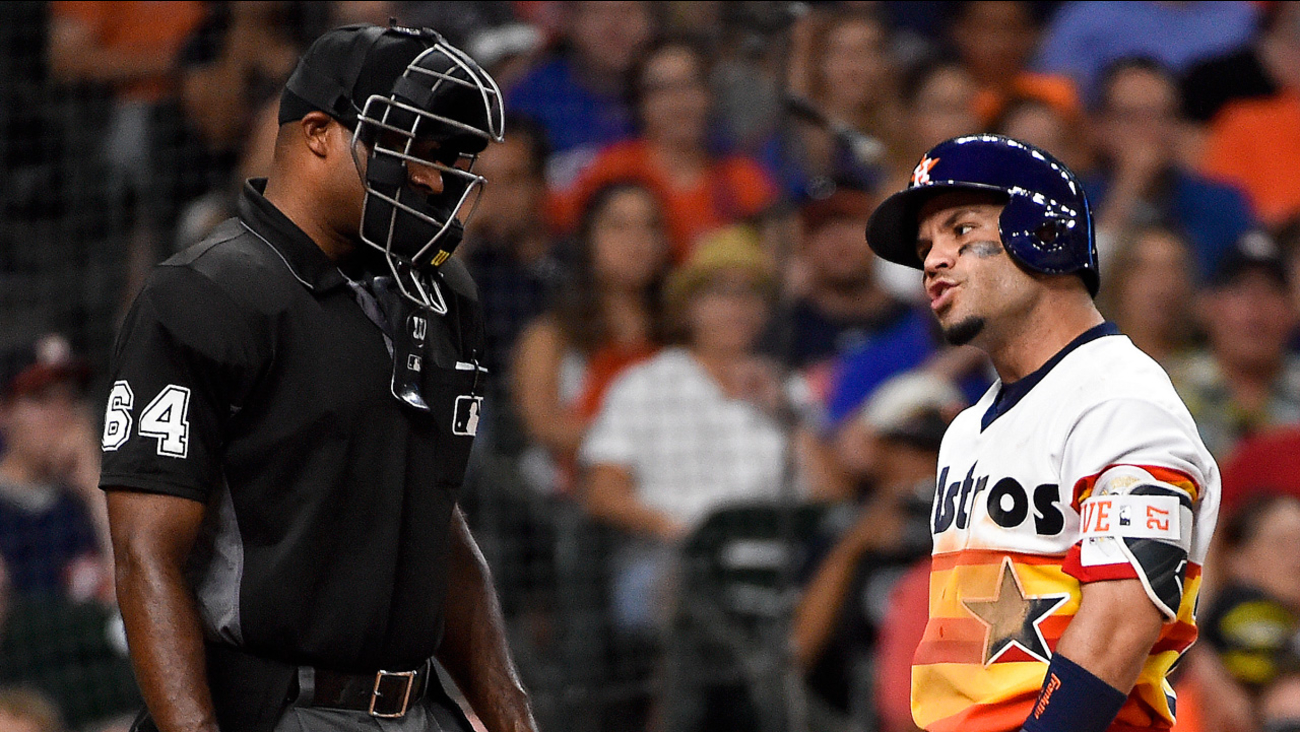 Houston Astros' Jose Altuve, right, argues with home plate umpire Alan Porter after being called out on strikes in the seventh inning of a baseball game against the Texas Rangers. (AP Photo/Eric Christian Smith)

Lucroy, Beltran and reliever Jeremy Jeffress were acquired before the trade deadline by the Rangers, and Lucroy hit his first homer with Texas in a 5-3 win Thursday.

"They've shown up huge for us, all three of them," manager Jeff Banister said. "Jeffress with the two innings he's thrown for us so far, Lucroy with what you see behind the plate, it's All-Star caliber. Frontline caliber. And then at the plate the two home runs tonight, the home run the other night and just the quality of at-bats. And then a future Hall of Famer in my opinion in Beltran. Just as good a hitter as there is in the game."

The Rangers improved to 10-2 against the Astros this season and pulled 6 1/2 games ahead of Houston in the AL West.

Beltran singled to left off Chris Devenski (0-3) in the seventh to score Shin-Soo Choo and make it 2-1. Beltran left after the inning with a left quad contusion.

Lucroy got his second home run in the eighth off Tony Sipp for his seventh career multihomer game and first this season.

Keone Kela (2-1) pitched a perfect sixth inning for the win. Sam Dyson ran into trouble in the ninth, giving up an RBI single to Alex Bregman, but induced a game-ending groundout from Marwin Gonzalez to get his 24th save.

Lucas Harrell gave up one run and walked five in 3 2/3 innings, matching his shortest outing of the season. The run came in the first inning when Preston Tucker walked with the bases loaded.

Houston left seven runners on base through the first three innings against Harrell.

Jose Altuve was ejected in the seventh for arguing with plate umpire Alan Porter. This is the first time Altuve has been ejected in his career.

Doug Fister gave up one run on nine hits, walked two and struck out two in six innings. Fister has allowed three runs or fewer in 18 of his 22 starts.

Bregman got the first three-hit game of his career with two singles and a double and got his first RBI. Bregman is 5 for 43 since making his debut.