Aaron Rodgers: Packers, at 4-6, can close with 6 straight wins 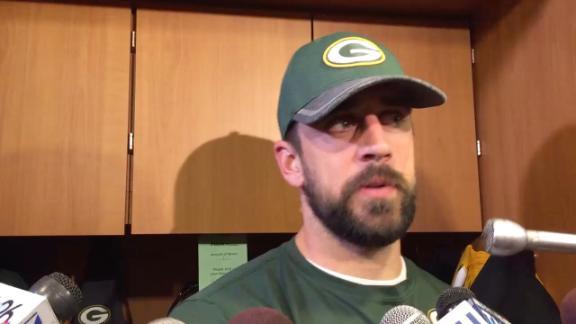 No one asked him why until three days later.

When presented with the natural, albeit delayed, follow-up question on Wednesday, Rodgers took it a step -- or six -- further.

"I feel like we can run the table, I really do," Rodgers said. "The offense is starting to click a little bit more, we've just got to put together a game where we're more consistent from the first snap to the last. We've been, I think, getting closer to that. We've really been clicking at times in the last few games. But it's going to be important that we get going early. We had three three-and-outs to start the [Washington] game, but overall on the season, we've done a better job of limiting our three-and-outs, we've been sustaining drives pretty well."

At 4-6 with six games remaining, the Packers stand two games out of first place in the NFC North behind co-leaders Detroit and Minnesota. The Lions and Vikings play on Thanksgiving so even if the Packers end their four-game losing streak with a win Monday night at Philadelphia, they're still going to be two games behind the division leader.

While Rodgers learned Wednesday that he won't get back running back Eddie Lacy, who will remain on injured reserve for the remainder of the season, he praised the addition of running back Christine Michael, who was claimed off waivers from Seattle last week, and the return of tight end Jared Cook, who had six catches for 105 and a touchdown against the Redskins after missing six games because of a sprained right ankle.

"You just feel like it just takes one," Rodgers said. "We get one under our belts, things might start rolling for us and we can run the table."

Receiver Jordy Nelson likened this season to 2010, when the Packers were 8-6 with two weeks remaining, were in danger of missing the playoffs and there was heat on coach Mike McCarthy. That season, they won their last two games and went on to the Super Bowl.

"I think everyone in here probably believes that, to be honest," Nelson said. "That's how we started the year. I don't think I've ever been part of a team here where we went into a game thinking there's no way we're going to win this game. Even if our backs are against the wall. If you look at the year we won the Super Bowl and people were counting us out and, honestly (people) were wanting to fire Mike back then when we lost at Detroit and went to New England and we lost and had to win out to make the playoffs. Every playoff game we've been in, every regular-season game we've been in we thought we were going to win. I think that's just how confident we are. I think the things we've done in the past allow us to be that confident. We just have to go out and do it on the field."

The problem, however, might not be on Rodgers' side of the ball. The defense has allowed 40-plus points in each of the last two games.

Still, Rodgers said it's incumbent upon him to make sure he plays "at a really high level" and "do what I've always done and be a little bit better every time I'm out there."

"I know a lot is going to be on our shoulders especially the way we're starting games out," Rodgers said. "We have to start faster, I have to be sharper from the start and I will be. And I'm confident that if we can get this thing started out a little better each week that we can get on that roll and be tough to stop. Now we have to go out and do it. It's just idle words right now, but I'm confident in our guys and I'm confident we'll respond on Monday."