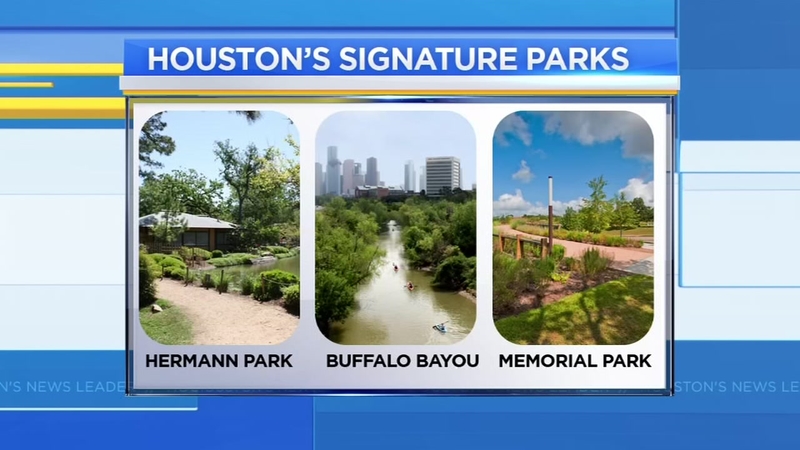 HOUSTON (KTRK) -- Houston is often characterized by concrete, urban sprawl. So you might be surprised by the amount of green space to explore in our big city.

The Houston park system alone boasts 371 parks with more than 37,000 acres. Next month, the parks and recreation department celebrates their 100th anniversary.

If you take a second look around town, you may notice some of the park system's hidden gems.

Take for instance "Bethel Church Park" in the 4th Ward which was once home to a historic church. The building burned in 2005. Instead of demolishing the structure, the city salvaged it a and transformed the site into a park.

The city's parks director Joe Turner said in addition to "Bethel Church Park," you may want to check out Hidalgo Park in the East End, Sam Houston Park in downtown Houston, or the Lake Houston Wilderness Park near New Caney.

"That park is about 40 miles out of here," said Turner. "It was a 5,000 acre park that was a state park and we saved it. It's hard to imagine you're so close to the city and in such a tranquil place."

Turner told abc13 they are working on connecting green spaces in the city with bicycle paths. Turner explained they're also focused on what he called "park equity," ensuring every neighborhood has a community park. To celebrate the parks department's 100th anniversary, Gragg Park in the Gulfgate area is undergoing a big face lift.

For a full list of parks in the city system, visit www.houstonparks.org.

While not in the park system, Turner said "Discovery Green" near the George R. Brown Convention Center is also a must-see.

Eyewitness News did a little exploring and often found other "hidden gems" within reach.

Up in the Heights, locals often refer to Donovan Park as the "Castle park." The park, located off 7th Street and Heights Boulevard, boasts big playground and is run by an area neighborhood association.

Nestled next to the city of West University Place, you'll find "Fire Truck Park" off Garnet Street in the city of Southside Place. It's a hit with most kids.

A big project being built right now in Bellaire promises a park experience unlike any other. Evelyn's Park is set to transform the old Texas nursery site at Bellaire Blvd and Newcastle Street.

Among the many amenities planned for Evelyn's, you'll find something really unique. Sculptor Bridgette Mongeon is currently creating a huge, life-sized replica of the famed "Alice and Wonderland's tea party." The park is scheduled to be open by the end of summer with the sculpture on display in November.

Take a look at some of the coming attractions at Houston's parks. Steve Campion reports.

"Oh my word, people from all over the world are excited about having Alice and the tea party here. This has been a work in progress for about four years," said Mongeon. "I think Houston is growing in the idea of parks. People want to spend more time with their families in the city. For Bellaire to do this for the city is just incredible. It gives you so many options right there in one little parks and who can afford to go away all the time? Let's all get outside and enjoy the time with our families."
Related topics:
societyhoustonrecreation
Copyright © 2021 KTRK-TV. All Rights Reserved.
More Videos
From CNN Newsource affiliates
TOP STORIES