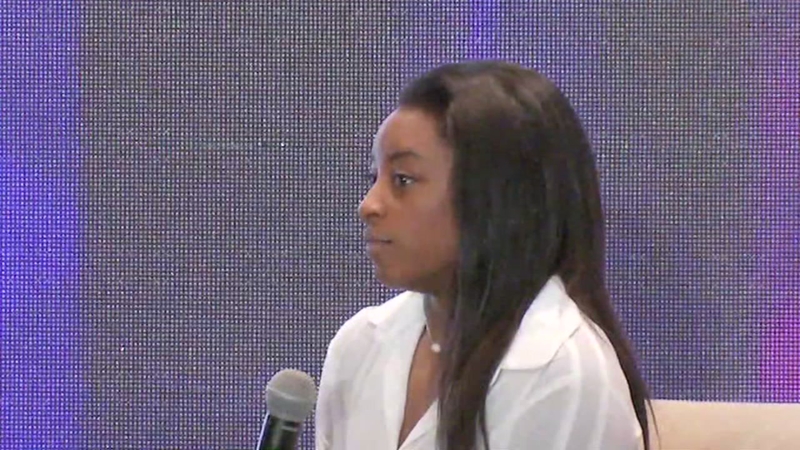 Biles hopes to inspire other abuse athletes after Nassar

HOUSTON, Texas (KTRK) -- Houston Olympic gold medalist Simone Biles did not testify against U.S. gymnastic team doctor Larry Nassar in his trial that found him guilty of sexually abusing young female gymnasts, but she said she was among them.

At a YMCA luncheon in downtown Houston today, Biles was the keynote speaker, and she described the impact that the abuse had on her life.

"You know, it wasn't easy for me to come out about being sexually abused by our team doctor. I did a lot of compartmentalizing," Biles revealed. "When my parents would ask me about it, I would get all angry, and I would just say 'No!' They would leave it, because it's not something you want to pull out of someone."

Biles trained at the Karolyi Camp and Gymnastics Center in Walker County. An investigation is underway to determine whether any of the abuse by Nassar occurred at the facility owned and operated by Bela Karolyi and his wife.

The investigations are being conducted by the Walker County Sheriff's Office and the Texas Rangers.

The center is not in operation now. The county judge said it appeared to be closed down several months ago. After the last summer Olympics, in which the team that included Biles left with medals, the Karolyis announced their retirement. Last year, Nassar went on trial.

"One day I was driving to the gym and I just lost it. Screaming, bawling when I realized I was a victim of it," Biles said at today's luncheon
She said she is not focusing on what happened, but how to move ahead.

"I got to talk to people about it," she said. "I'm going to my first therapy session soon. I go to counseling. I'm doing good. I'm doing good in the gym."

It's not without its challenges either.

"Everyday is a struggle and everyday I realize it could help some other girls and boys going through the same thing, to not be afraid to speak up. It's something you should not be ashamed of," Biles said.

Biles is also enrolled in online college classes and is in training to compete in another Olympics.

FULL VIDEO: Simone Biles talks about the Nassar abuse and dealing with the scars of it

Report a correction or typo
Related topics:
sportshoustonabuselarry nassargymnasticssex abusesimone biles
Copyright © 2021 KTRK-TV. All Rights Reserved.
TOP STORIES
Arrest made in case of Alvin abduction, sexual assault of a minor
20-year-old shot to death during break-in of Conroe home, police say
Man accused of dismembering mom's body after murder appears in court
Houston Astros on pace for record beer year
Astros Game 6 guide: Closures around Minute Maid Park back on tonight
Cleveland man indicted in connection with U.S. Capitol attack
The University of St. Thomas offers low-cost counseling services
Show More
JJ Watt on Texans: 'It hurts me to see where' fan base is now
More truck drivers needed to assist with US' supply chain shortage
Don't get stuck in these traffic closures this weekend
Warrant: Baldwin didn't know weapon contained live round
Prop guns: What they are and how they can kill
More TOP STORIES News