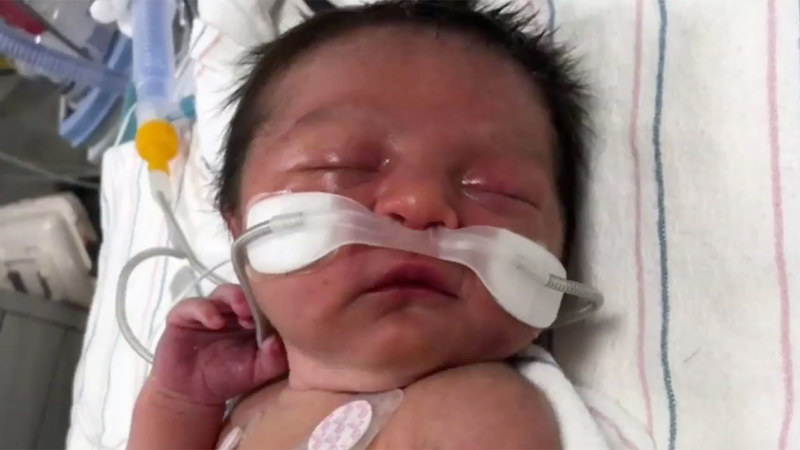 SILVER SPRING, Md. -- A Maryland newborn's cries may have saved her life after she was abandoned in the woods, only to be found just in time by a passerby on Friday evening.

A man heard the child crying as he walked down the sidewalk in Silver Spring, a northern suburb of Washington, according to local police. Investigators believe the child was just hours old when she was left all alone about 10 feet into the woods on a nearly 90-degree day without so much as a diaper.

Had it not been for the man who found the baby, officials said the girl likely would not be alive Saturday morning.

"We were very fortunate that man was walking down that sidewalk," Montgomery County Police Sgt. Rebecca Innocenti said.

The infant was hospitalized and is in stable condition, and police are now trying to find the newborn's mother to learn why she didn't bring the baby to a designated safe-haven drop-off location. Safe-haven laws, which vary by state, allow parents to leave a newborn at a fire station, hospital or other designated location with no questions asked.

Anyone who abandons a baby anywhere other than at a designated safe-haven location can face charges, but in this case, police said they want to find the child's mother because they're concerned she may need medical attention or psychological support.

"We're just happy for the child and feeling bad for the family or the person who felt they needed to do this," neighbor David Devlin-Foltz said.

Authorities told Washington television station WJLA that the girl could be Hispanic, but no other details about her identity have been released. Anybody with information about the infant is asked to call the Montgomery County Police Department at 240-773-5400.

The Maryland girl's plight is reminiscent of that of Baby India, who was found abandoned in a plastic bag in Georgia earlier this summer hours after she was born. The baby, who attracted national attention as police tried to find her parents, was hospitalized and then moved into foster care.

Bodycam video shows officers ripping open a plastic bag to find a newborn baby girl who had been abandoned on the side of a road in Georgia.