Brothers shot to death in rooftop ambush in E. Houston 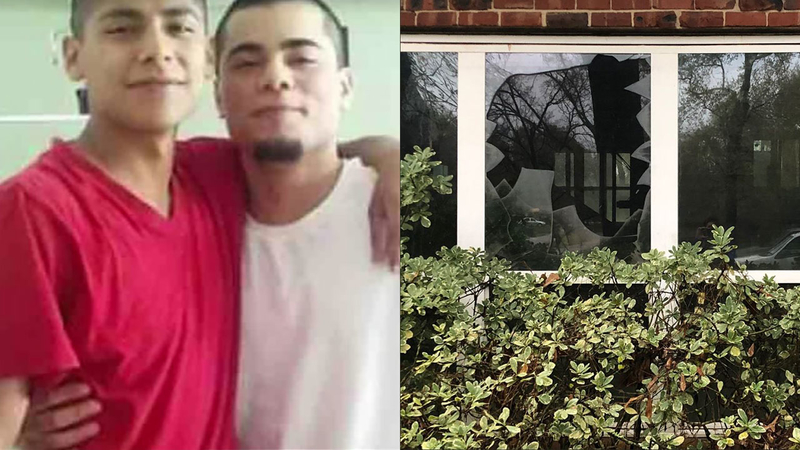 HOUSTON, Texas (KTRK) -- The two people who were shot and killed in what police called an ambush in east Houston were identified as brothers.

Police said the two victims in the shooting that took place Thursday were 18-year-old Josue Aguilar and 20-year-old Maximo Aguilar. The victims were brothers, ABC13 Eyewitness News confirmed through their mother.

The ambush happened after 4:45 p.m. in the 12800 block of Eastbrook, near Strickland Park.

HPD Chief Art Acevedo says the shooter was waiting on the roof of an abandoned home, armed with an "AR-15 type rifle, with a 30-round clip." Police later stated the weapon was a "high-powered rifle."

Surveillance video obtained by ABC13 Friday morning shows two people running away during the shooting. In another clip, a man in red is crawling on the ground. Two other men are also in the video, including one who appears to be crouching by a car along the street.

During a press conference Thursday night, Houston police Chief Art Acevedo said the shooting happened between two groups who were "settling a score from a previous fight." The victims' mother said she begged the group not to go.

One group arrived first and camped out on the roof.

DAYLIGHT LOOK: police tape down, we get to see the 3 abandoned homes on Eastbrook Dr. dead end, where police say shooter say on roof and picked his victims off “like deer.” 2 men dead. #abc13 https://t.co/Sjo3fkViY1… pic.twitter.com/6Tgp1Htem1

After the shots rang out, two people died in the incident.

Another man, who the mother identified as 23-year-old Julio Agular and is also her son, was transported to the hospital in critical condition. An 18-year-old woman was shot in the knee.

Police say there is a search for two or possibly more suspects, one of whom is believed to be a Hispanic male.

The group may have driven from the area in a black Chevrolet Tahoe, last seen heading southbound on Maxey Road, police said.

"No one's in custody, but I have high confidence that we're going to find this coward," Acevedo said Thursday evening. "We're looking for a black Tahoe. A black Tahoe is all we have so far, but I promise you, we're going to get them."

A neighbor told ABC13 he heard at least 30 shots and described a woman screaming hysterical in the street.

"They have to catch those guys because who knows if they'll do it again," said neighbor Johnny Perry.

HPD on the roof — where shooter positioned himself with a high power rifle. Police say he waited for victims then fired. Four men were shot. Two are dead. #abc13 https://t.co/jEa06zPEAT pic.twitter.com/2EcSjCdje0

Follow Courtney Fischer on Facebook and Twitter.
Follow Marla Carter on Twitter and Facebook.
Follow Stefania Okolie on Instagram and Twitter.
Report a correction or typo
Related topics:
houstonshootingteen shotteen killedinvesting
Copyright © 2021 KTRK-TV. All Rights Reserved.
TOP STORIES
Arrest made in case of Alvin abduction, sexual assault of a minor
20-year-old shot to death during break-in of Conroe home, police say
Man accused of dismembering mom's body after murder appears in court
Houston Astros on pace for record beer year
Astros Game 6 guide: Closures around Minute Maid Park back on tonight
The University of St. Thomas offers low-cost counseling services
JJ Watt on Texans: 'It hurts me to see where' fan base is now
Show More
More truck drivers needed to assist with US' supply chain shortage
Don't get stuck in these traffic closures this weekend
Warrant: Baldwin didn't know weapon contained live round
Prop guns: What they are and how they can kill
4 teens accused of luring victim to his death in SE Houston
More TOP STORIES News