Controversy on the court: Times Serena Williams was at odds with U.S. Open match officials 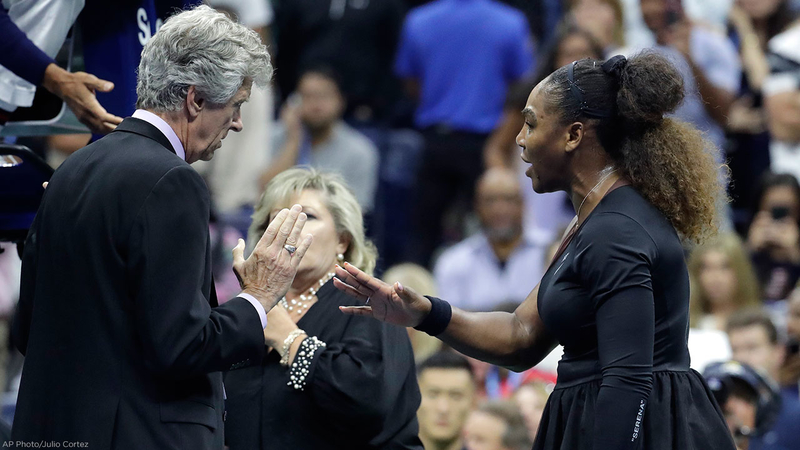 "It's unbelievable. Every time I play here, I have problems," Serena Williams lamented during a heated confrontation with match officials during the 2018 U.S. Open final against Naomi Osaka on Saturday.

Williams' disputes during the final -- over receiving coaching and "verbal abuse" -- are the latest disagreement she's had with match officials at the Grand Slam tournament, which she's won six times. Williams was ultimately fined a total of $17,000 for three violations issued by chair umpire Carlos Ramos.

Here is a brief look back at those other U.S. Open controversies involving Williams:

In the opening game of the third set, Williams hit a backhand that landed in - and was ruled in by a line judge - but chair umpire Mariana Alves awarded the point to Jennifer Capriati. This mistake was cited later when electronic line-calling was introduced to Grand Slam tennis.

"I don't need to see the replay. I know my shots. Not only was it in, it wasn't even near the line," Williams said. "But I'm not making excuses. I didn't lose because of that. I probably should have closed her out in the second set."


THE FOOT FAULT (Sept. 12, 2009)
Williams shouted and cursed at line judge Shino Tsurubuchi over a foot fault call. The line judge went over to chair umpire Louise Engzell, who assessed a penalty point because it was Williams' second code violation of the match.

Williams was fined a record $82,500 and told she could be suspended from the U.S. Open and her fine doubled if she had another "major offense" at any Grand Slam tournament over the next two years.

Williams hit a forehand that she celebrated with a familiar cry of "Come on!" But she shouted as Sam Stosur was still reaching for a backhand. Chair umpire Eva Asderaki ruled the point wasn't over and so awarded it to Stosur, saying Williams hindered her opponent's ability to complete the exchange. Williams directed a series of insults at Asderaki, who issued a code violation for verbal abuse.

Williams was fined $2,000 by the U.S. Open. The Grand Slam committee ruled that what she did "did not rise to the level of a major offense" and so she didn't face the additional disciplinary action that she could have been subject to after what happened in 2009.

Serena Williams said she would rather lose than "cheat to win" after she was given the violation by Carlos Ramos of Portugal in the second game of the second.

Williams clashed with chair umpire Carlos Ramos, demanding an apology after he initially issued a warning for a code violation in the second set's second game for receiving coaching, which is not allowed during Grand Slam matches.

The tournament referee's office docked Williams $10,000 for "verbal abuse" of chair umpire Carlos Ramos, $4,000 for being warned for coaching, and $3,000 for breaking her racket.

The controversy surrounding the calls prompted a larger discussion about how women are treated in tennis, with many observers (including tennis legend Billie Jean King) saying that Williams was treated differently than a man would have been.

(2/2) When a woman is emotional, she’s “hysterical” and she’s penalized for it. When a man does the same, he’s “outspoken” & and there are no repercussions. Thank you, @serenawilliams, for calling out this double standard. More voices are needed to do the same.