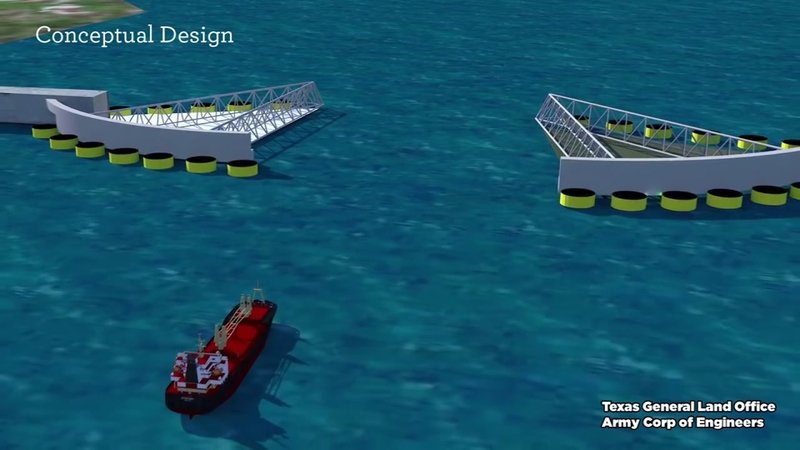 Officials want to build the largest floodgate in the world to protect the Galveston area coastline.

GALVESTON, Texas (KTRK) -- It's been nicknamed the "Ike Dike" since people started talking about a barrier protection plan along the Gulf Coast a decade ago.

Now, the U.S. Army Corps of Engineers and Texas General Land Office has released its first draft of the Coastal Texas Study.

It's a groundbreaking plan with almost 30 floodgates forming a protective barrier to the oil refinery business, homes, and business owners, like Dennis Byrd who owns The Spot along Galveston's seawall.

"Storm surge is a big risk for Galveston Island and the region. I saw it first-hand 10 years ago, standing on the second floor of the balcony of The Spot restaurant," said Byrd.

A decade after Hurricane Ike ravaged the coast, the Coastal Texas Study developed by the Army Corp of Engineers and Texas General Land Office is designed to reduce the risk of storm surge, mirroring projects in London, Venice, and the Netherlands.

The barrier system covers 70 miles of coast, starting near High Island, down Bolivar Peninsula, across the entrance to Galveston Bay, and down the Island to San Luis Pass.

Once complete, the main gate across the ship channel would be the largest floodgate in the world, at 2800 feet wide - enough so that two tankers could pass through when open.

Dr. Kelly Burks-Copes is the Project Manager. She said, "We are talking about a larger barrier system on the front of the two barrier islands. Galveston Island and Bolivar, but we have to go through the pass and connect those two barriers and to do that we have to put in gates, navigable gates, things that can open during normal days like today, but when a storm comes, we would close it and that would provide us with the risk reduction we would need on that back side."

The study will be completed by 2021 and submitted to Congress for funding approval. The total price tag could reach $30 billion, but would likely be completed and funded in several phases. The benefits would extend up into other Galveston Bay communities.