The shuttle that got away: Enterprise in NYC, not Houston 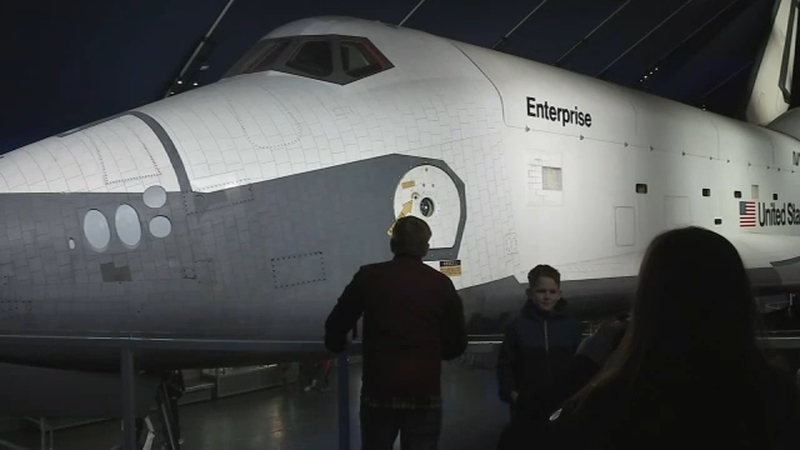 The shuttle that got away: Enterprise in NYC, not Houston

Anyone feeling a little homesick? There's a piece of NASA history right in the heart of the Big Apple that Houstonians may not know about.

The Space Shuttle Enterprise is located at the Intrepid Sea, Air & Space Museum on Pier 86 in Midtown, about nine miles south of Yankee Stadium, where the Astros are facing the Yankees in Games 4 and 5.

The shuttle was built by NASA in the '70s. It never actually flew in space. Instead, it did hundreds of approach and landing test flights, and some of them took place in Houston.

Which is why, back in 2012, when Enterprise was looking for a permanent home to be displayed for the public, many Houstonians thought their city should get the honor. It's Space City, after all.

But, the Intrepid Sea, Air & Space Museum in New York City was chosen instead. More than 1 million visitors come to see Enterprise each year. Houston has the replica.

"There were just so many museums that wanted one of the vehicles," said Eric Boeh, the museum's curator of aviation. "But what you have in Houston, you guys have something I'm really jealous of. You have the (Boeing) 747 (aircraft). There's a replica shuttle on top, but that has been converted into a marvelous experience where you can go inside. People cannot go inside Enterprise. We struggle with that. People expect that they're going to get inside."

Inside the museum's Shuttle Pavilion, Houston is on display. It's a little piece of home in the big city, shown through the history of NASA.

"It's about the stories of people who flew in it," Boeh said. "Those stories are rich and deep and there's hundreds of people you can investigate there."

Outside the pavilion, there are more than a dozen aircraft set among the sweeping New York City skyline. The museum is open 10 a.m. to 5 p.m. Monday through Friday and 10 a.m. to 6 p.m. Saturday, Sunday and holidays.

NASA in NY: any guesses what we’re showing you this morning before the game??? #abc13 pic.twitter.com/jDWwbdnmwt

Remember back in 2011 when NYC got picked to be the permanent home for the Enterprise Shuttle? A lot of Houstonians felt jipped. We are Space City, after all. Well, here’s where she lives!!!! #abc13 #abc13innyc pic.twitter.com/BFUrHLgFf4

Guess what? One of the museum’s own curators explained to me — in a way, we got the better end of the deal. Because we can go INSIDE our replica shuttle. You can’t do that here. #abc13 #spacecity https://t.co/K75wQQsZI3 pic.twitter.com/XCAOiS48nn

I could have spent all day here. What a fantastic place to learn about the shuttle’s history: the people who engineered it, drove it, and built it. #abc13 #abc13innyc pic.twitter.com/mHpottYZMh

NOT TO MENTION the uber cool aircraft outside the shuttle pavilion. Astros fans, NASA nerds, Space City enthusiasts— you’ve got to check out the @IntrepidMuseum if you have time before the game! #abc13 #abc13innyc https://t.co/M0Xgf5NcZd pic.twitter.com/hjpP7cgQQn

And just onnnnne more cool thing you can see from this spot...