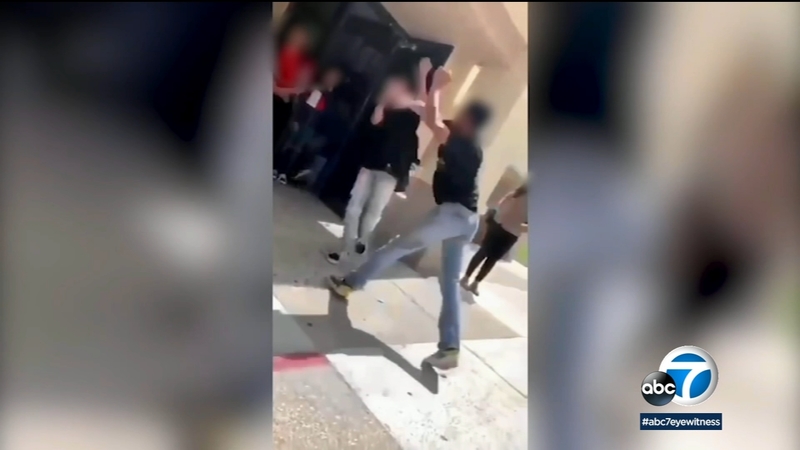 MORENO VALLEY, California -- Two middle school students who were allegedly involved in an on-campus fight that turned deadly have been charged.

The students are charged with assault by means of force likely to produce great bodily injury, the Riverside County District Attorney's office said. Their identities were not disclosed due to their ages.

Cell phone video of the incident at Landmark Middle School shows one suspect appearing to confront the victim and punch him in the head. A second boy also allegedly strikes the boy. The victim then appears to hit his head on a pillar and drop to the ground. The first allegedly hits the boy a second time before running away.

A throng of mourners gathered outside the school Tuesday night, many clutching candles and some wearing T-shirts emblazoned with a photo of Diego.

While some in the crowd are demanding change, most were there to show support for Diego and his family.

"Preparations by Diego's family are underway for organ donation to transform this tragedy into the gift of life for other children," a news release stated.

Heartbreaking words were shared by his friends as hundreds gathered outside the school.

Parents have been demanding answers from school administrators in the wake of the attack.

"Kids are being bullied and they're not doing anything," said parent Karla Palumbo. "We've asked them to change the policies, the rules, a little bit more stricter, but that hasn't happened."

At the vigil, an angry group surrounded the school district superintendent -- some calling him a coward -- as he made his way into the school.

Earlier in the day, Kedziora told reporters extra security has been added and instances of violence on campus isn't taken lightly by the school. Kedziora also made an appearance at the school, drawing screams from many in the crowd, which included upset parents and students.