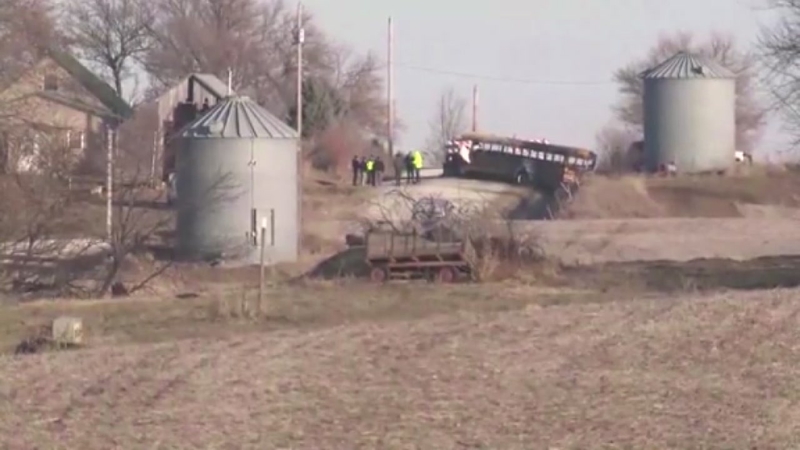 OAKLAND, Iowa -- A fire erupted on a school bus after it backed into a ditch in western Iowa early Tuesday, killing a student and the bus driver, investigators said.

No one else was on the bus when the fire erupted around 7 a.m. southeast of Oakland, which is about 35 miles (56 kilometers) east of Omaha, Nebraska.

Investigators said the bus caught fire after it backed out of a farm driveway and into a ditch across the road. The bus was engulfed in flames when firefighters arrived.

The remains of the driver and a student were found after the fire was extinguished, Pottawattamie County Sheriff's Lt. Rob Ambrose said. The cause of the fire remains under investigation.

Initial reports on the fire indicated that as many as 20 people may have been on the bus, but Ambrose said only the student and the driver who were killed were in the bus at the time of the fire.

The ages and names of the victims haven't been released.

The bus was from the Riverside Community School District, which has about 700 students from Oakland and two other nearby towns. District officials said grief counselors were available Tuesday to help students and staff cope with the deaths.

"This morning, the Riverside Community School District suffered a tragedy when we lost a student and an employee in a school bus accident," Superintendent Tim Mitchell said in a statement. "Our hearts go out to their families and loved ones."

The district didn't cancel classes following news of the fire, but it postponed all after-school activities scheduled for Tuesday.