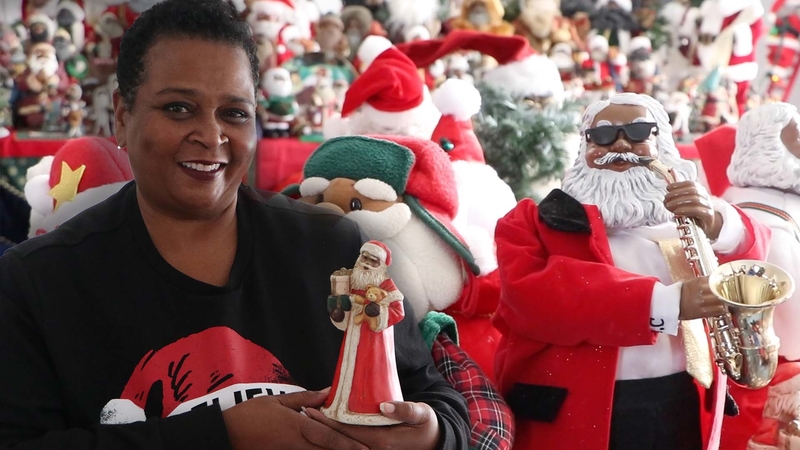 SOMERDALE, New Jersey -- "First year I moved into the home, I was out shopping and I came across this one. And I thought, 'Oh my God, I've never seen a Black Santa Claus,'" said Crystal Kittles. "I thought it was just so unique and so nice to see a Santa Claus of the same color."

Kittle's husband bought the musical box-embedded trinket as a housewarming gift. Little did she know it would start a massive collection that is still growing 21 years later.

"From that time on, family and friends began to buy them for me," she said.

Sadly, her husband passed away. But Kittles remarried and continued building her collection and family over the years. Her favorites include a saxophone-playing Santa, a Malibu Beach Santa, a rapping Hip-Hop Santa, and a six-foot tall Santa statue.

"So many different ones, but I've never taken the time to count them," she said. To me, it's not always about the gifts. It's just about the gathering, just seeing each other enjoying each other."

Once every two years, Kittles unearths the collection and invites community members for a seasonal open house. It has become a tradition to gather all the children and grandchildren for a day filled with Christmas music, food, and decorating.

"I would have the church members come out and they can bring their children, their grandchildren," she said. "We just sit back and enjoy the spirit of the holiday."

Kittles, an educational assistant in the Cherry Hill School district, now has grandchildren of her own. She says that displaying her diverse array of Black Santa trinkets has earned a new meaning.

"I think it's very important that they see it and they can identify with it," she said. "It helps them to be proud. They can say, 'Okay, I can be anything. I can be anyone.'"

Kittle's son, Isaac Ware, sees the impact it has on his daughters.

"It's great to have that tradition and something that we're able to share with them and the representation it brings for them to see someone who looks like them," he said. "It can be shared amongst everybody. Santa is for everyone."

Crystal Kittles hopes that many children outside of her home will learn about her collection and be inspired to believe in the spirit of Christmas. She especially leaned on her faith when she battled breast cancer.

"Try to find joy in every day," she said. "If you have faith, hold on to your faith."

Keeping that motto close to her heart, Kittles has been a survivor for eight years.

"I thank God for that because it also gives you a different perspective on the little things," she said.