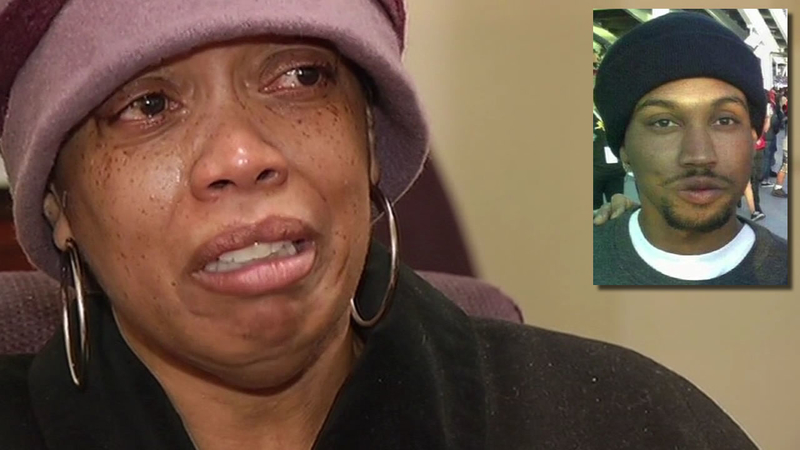 SAN FRANCISCO , CA -- The mother of the stabbing suspect shot and killed by San Francisco police Wednesday says her son was struggling to turn his life around. ABC7 News spoke exclusively to her.

Residents of the Bayview we spoke with have seen the videos that are on social media and they wonder why police used lethal force against Woods.

Gwen grieved as she made arrangements for her son's funeral. She said he suffered from mental health issues, but was starting to overcome them.

"He fought past them. He was supposed to start UPS today. He got his uniform," Gwen said.

Officers shot and killed the 26-year-old in a barrage of gunfire Wednesday afternoon at 3rd Street and Gillman. Police were looking for Woods after he reportedly stabbed someone. They found him walking, police say, still carrying the knife. A cellphone video, which investigators are reviewing, recorded his final moments.

Before the shooting officers yelled "drop the knife" several times. They say he ignored their commands. Next, they fired bean bag guns.

Police Chief Greg Suhr told the media, "He doubles over one time. That's from the striking of one of the bean bags. They're very powerful and yet he would not drop the knife."

The video then shows Woods walking as one officer moves to block his way.

"He moves toward the officer. The officer fires and the other officers fire in defense of that officer," Suhr said.

A witness took this cellphone video of the San Francisco police shooting of Mario Woods that happened on Dec. 2, 2015. Warning: This video contains graphic content and strong language


Suhr says his officers tried everything before resorting to deadly force. Others disagree.

"As you can see, the young man wasn't lunging the knife at anyone. He was actually walking away and the officer got in his path and they opened fire," Shawn Richard from Brothers Against Guns said.

Among those that disagree police had to resort to lethal force is Gwen, who says police could have easily overpowered him.

Gwen said, "It was a better way of handling it than 25 bullets in my baby."