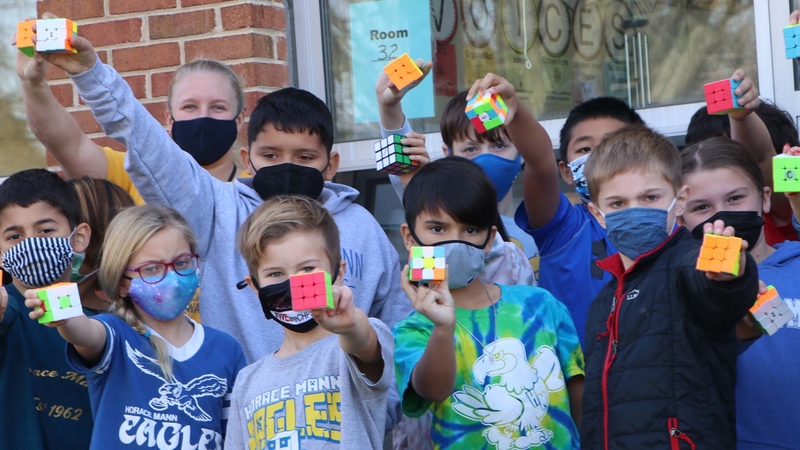 CHERRY HILL, New Jersey -- "This year, I had a student that came in that could solve a Rubik's Cube in under a minute and I was completely intrigued by it," said fourth-grade teacher Heather Hayes. "And I decided that I wanted to go on that journey. And I thought, 'Why should I be the only one that comes along on this journey?'"

Hayes, a 20-year teacher at Horace Mann Elementary School, saw an opportunity to engage her students in hands-on learning. She and her grade-level partner, Chelsea Monahan, embarked on a journey to teach every fourth-grade student how to solve the puzzle.

"At this point, we now have 90% of our students solving the cube," said Hayes. "And this time next week, I'm certain 100% of those students will solve this cube in under 10 minutes."

Elliot, the student who sparked this phenomenon, can solve the Rubik's Cube in less than 30 seconds. He enjoys helping students learn the basics and later become experts in handling the classic 1980s toy.

"You can accomplish any hard goal if you just do it in steps," he said. "Everybody practiced at, like, home and in school. And then we watched this video over and over again until everybody learned how to solve it."

Like education overall, this particular task could not be completed without the help of parents at home. Jennifer Dyer is a mom to twin girls split between both homerooms. She also learned how to solve a Rubik's Cube alongside her fourth graders.

"To have the support of the students, the teacher, the parents all working together towards one common goal, that's what leads to success," she said.

Of course, the teachers learned how to conquer the cube as well. They enjoy when a student can finish faster than the adults.

"It helps us relate to the students, and it helps our rapport as well because they see us struggling," said Chelsea Monahan. "It's been really cool for the students to see that we're working alongside of them."