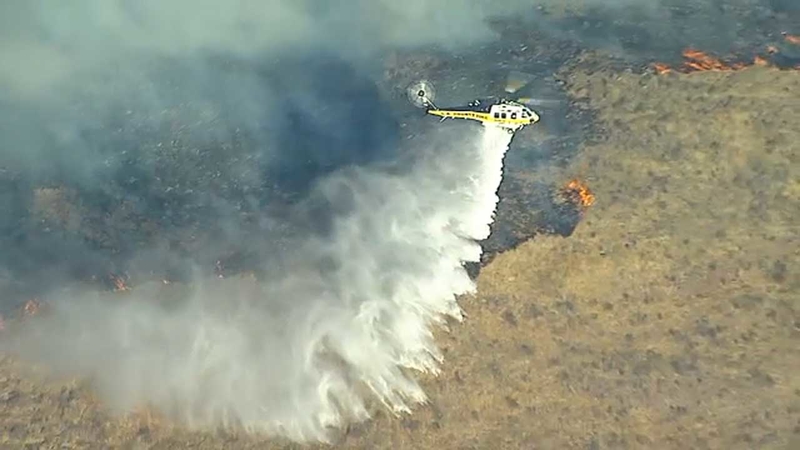 SIMI VALLEY, Calif. -- A fast-moving vegetation fire erupted on the hillsides above Simi Valley on Wednesday morning amid extreme red-flag conditions, prompting evacuation orders and school closures as it spread to 1,491 acres.

The Easy Fire began shortly after 6 a.m. near the 200 block of West Los Angeles Avenue. Homes in nearby residential neighborhoods were immediately threatened by the flames, even after winds initially seemed to be blowing the fire in a direction away from houses.

Hours later, the Ventura County Fire Department said 6,500 homes were in danger. One structure was destroyed.

The Easy Fire that started around 6 a.m. in the SImi Valley this morning is inching closer to the Ronald Reagan Presidential Library.

Firefighters raced to protect the Ronald Reagan Presidential Library as a thin wall of flames approached from a nearby hillside. The facility, which used an unusual precautionary measure, was closed Wednesday.

"We actually worked with the Ventura County Fire Department in May and they bring out hundreds of goats to our property," said Melissa Giller, a spokeswoman for the library. "The goats eat all of the brush around the entire property creating a fire perimeter."

A map of evacuated areas is available here.

The conflagration forced the California Highway Patrol to close California 23 (the Moorpark Freeway) in both directions between Avenida de los Arboles and Los Angeles Avenue.

Just before 1:30 p.m., a new brush fire ignited near homes on Yosemite Avenue along the 118 Freeway, about eight miles east of where the Easy Fire started.

Firefighters made quick work of the second incident, dubbed the Yosemite Fire.

No injuries were reported in either blaze.

Flames and embers from the Easy Fire jumped the 23 Freeway about 2:30 p.m. DC-10s and other aircraft quickly pounced on the area, repeatedly dropping fire retardant in an effort to protect a residential community near the Tierra Rejada Golf Club.

All campuses in nearly a dozen school districts were closed Wednesday, as were several other educational facilities in the area, according to the Ventura County Office of Education.

Santa Ana winds were expected to reach speeds of 40-50 mph in the burn area on Wednesday, with gusts of up to 60 mph on ridgetops, the National Weather Service said. Single-digit humidity was expected throughout the day.