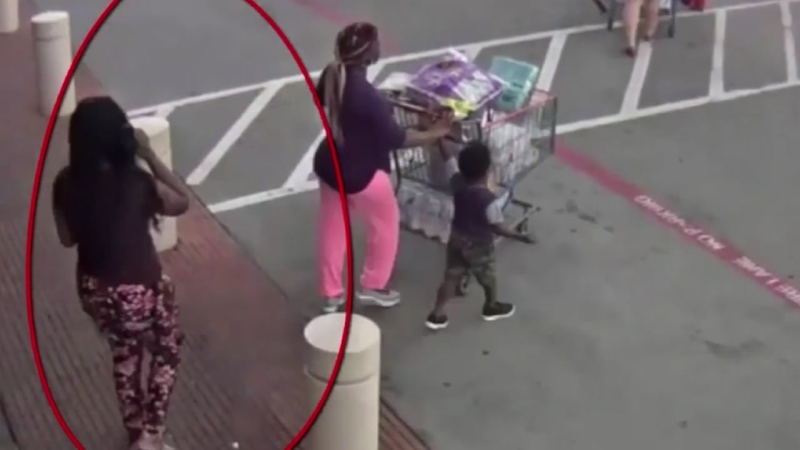 Investigators say a female robber followed the pregnant victim from one store to another before robbing her.

HOUSTON, Texas (KTRK) -- Houston police need your help finding a suspect who held a pregnant mother of four at knifepoint and demanded her wallet outside a Walmart store.

The victim, named Omotokemi Ogunjim, was 36 weeks pregnant at the time.

Investigators said the suspect followed the pregnant woman from Joe V's Grocery Store to the Walmart on South Gessner Road.

Ogunjimi said she was distracted while taking her son out of the backseat.

Police say the robber sprang into action, holding a knife against the victim's stomach.

The woman identified herself as the store manager.

Ogunjimi drove to a nearby Wells Fargo to deposit some cash and then stopped by Walmart to buy diapers.

At first, she didn't even recognize the woman who suddenly pulled up next to her and demanded the woman's wallet, according to police.

It was the same woman she had seen at Joe V's.

"She was so close and she just whispered the words," Ogunjimi explained, "and pointed the knife at my belly and I said, 'Okay, just take it, as long as you don't hurt me and you don't hurt my child.'"

Thankfully, Ogunjimi and her children are all safe.

She has since given birth to a healthy boy, but still has trouble sleeping at night.

"She's a woman and she looked at me, and she realized that I couldn't fight back, and I know she targeted me," Ogunjimi said.

Crime Stoppers released surveillance video from back in October showing the suspect following the victim into a parking lot at a The West Bellfort grocery store.

The suspect is described as a black female, 25 to 35 years old, standing between 5'5" and 5'6". She was seen wearing a purple shirt, multi-colored pants and sandals.

If you know who this woman is, call Crime Stoppers at 713-222-TIPS. You can also make an anonymous tip online at www.Crime-Stoppers.org.