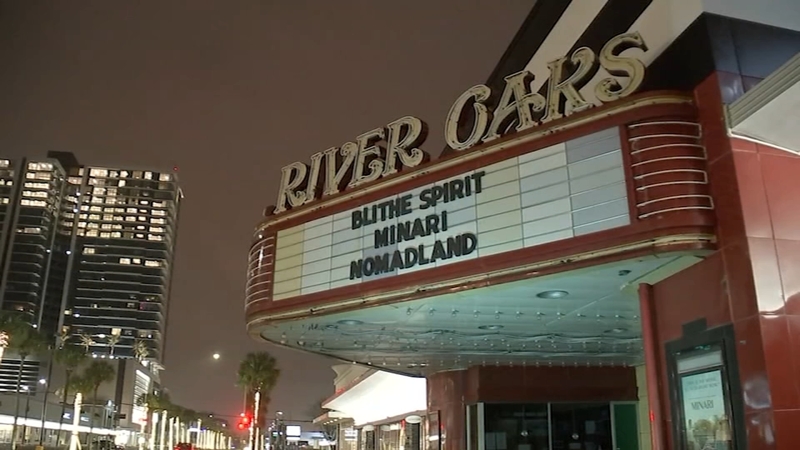 HOUSTON, Texas (KTRK) -- The future of River Oaks Theatre appears to be uncertain.

The lease between Landmark Theatres, which owns and operates River Oaks Theatre, and Weingarten Realty, the landlord, is coming to an end, and ABC13 has been told negotiations to renew or extend the lease have stalled.

"Talks with the landlord have been periodic and intermittent, and as of late, we just have not been able to get them to try to work with us," said Paul Serwitz, the CEO and president of Landmark Theatres.

The River Oaks Theatre has the distinction of being the longest, continuous running exhibition of The Rocky Horror Picture Show.

With only three screens, the patrons are a small but loyal group who have kept the theatre in business since opening in 1939. But nothing could save them from the financial fallout of the COVID-19 pandemic.

They closed for six months beginning March 16, 2020, but reopening in September did not help.

Serwitz said their business has dropped by 90%.

They haven't paid rent since last March and Serwitz said they are trying to negotiate a new lease that reflects their economic hardship.

An abatement for rent during the closure and rent deferral until ticket sales return to normal.

ABC13 reached out to Weingarten Realty and received the following statement:

"Silver Cinema Acquisition Company has been a key component to River Oaks Shopping Center. We have continued to work with the Company who has not paid rent since March of 2020. Conversations have indicated that their business model does not support paying more than a fraction of the previous rent going forward. Unfortunately, the pandemic has caused many businesses in the entertainment industry, such as theaters, to fail. We cannot comment on lease negotiations at this time."

Any closure of the River Oaks Theatre would surely be a loss to Houston.

Considered an icon in the city, River Oaks Theatre is known for its rich history and art deco design.

Opening in November 1939 with the film "Bachelor Mother" starring David Niven and Ginger Rogers, the theater has been voted "Best Movie Theater" by the Houston community five different times and has won multiple awards, including for "Preservation of a Landmark Facility as a Unique and Special Venue for Art, Vintage and Independently Produced Films" by the Museum District Business Alliance.

"Its the last of the historic theatres in the city of Houston," said Serwitz. "All the rest have gone by the wayside."

Landmark Theatres has owned and operated the theater since 1976.

Serwitz is still hopeful to find a road that keeps this last remaining venue in Houston alive.

"All I can urge people to do is reach out to the landlord, the realty company, and have their voices heard about their love and passion and history with the River Oaks Theatre," he said.