HOUSTON, Texas (KTRK) -- Two Harris County Sheriff's deputies were injured and the man they were taking to jail was killed when they were hit head-on by a wrong-way driver in west Harris County.

He has been charged with felony murder and intoxication assault on a peace officer.

Authorities say Deputy C. Drake and Deputy P. Zelaya were going eastbound on the Westpark Tollway at Synott around 11:30 p.m. Sunday when Njogu slammed his Lexus into their patrol vehicle.

ABC13's Steve Campion uncovers more details in a deadly crash involving deputies transporting a prisoner and a man who has repeatedly offended in the past.

According to the Harris County Toll Road Authority, Njogu entered the tollway at Cook Road at 11:23 p.m. on Sunday night.

The crash occurred less than two minutes later about a mile down the road on the ramp at Synott, which means Njogu drove by at least two 'Do Not Enter' and four 'Wrong Way' signs.

Toll road officials say the wrong-way system detected his vehicle and two other drivers called 911, but the calls did not make it in time.

The deputies were taking 42-year-old Rene Rivas, who was in the backseat of the patrol unit, to jail for allegedly being impaired in a separate DWI crash.

Investigators spoke to the deputies who said they had little time to react.

Sean Teare with the Harris County District Attorney's Office says he has seen video of the collision.

"You can see the moment the two deputies go over the hill on the on-ramp as this defendant is basically exiting Westpark the wrong way," Teare said.

The Harris County Toll Road Authority then located Njogu's vehicle on camera but could not prevent the head-on collision.

"He had nowhere to go. It is an on-ramp, a one lane on-ramp. He was only able to see him for a split second before the head-on," Teare explained.

Officials say everyone was wearing a seat belt, and they were all taken to Memorial Hermann Southwest Hospital. Rivas died.

Deputy Drake had a broken foot, numerous bruises and cuts, and Deputy Zelaya suffered a concussion. Njogu was taken to the hospital with a broken leg.

Two deputies are injured and a person in transport is killed after the deputy’s patrol car was struck by a wrong way driver on the Westpark tollway. pic.twitter.com/PAxqm0pySg 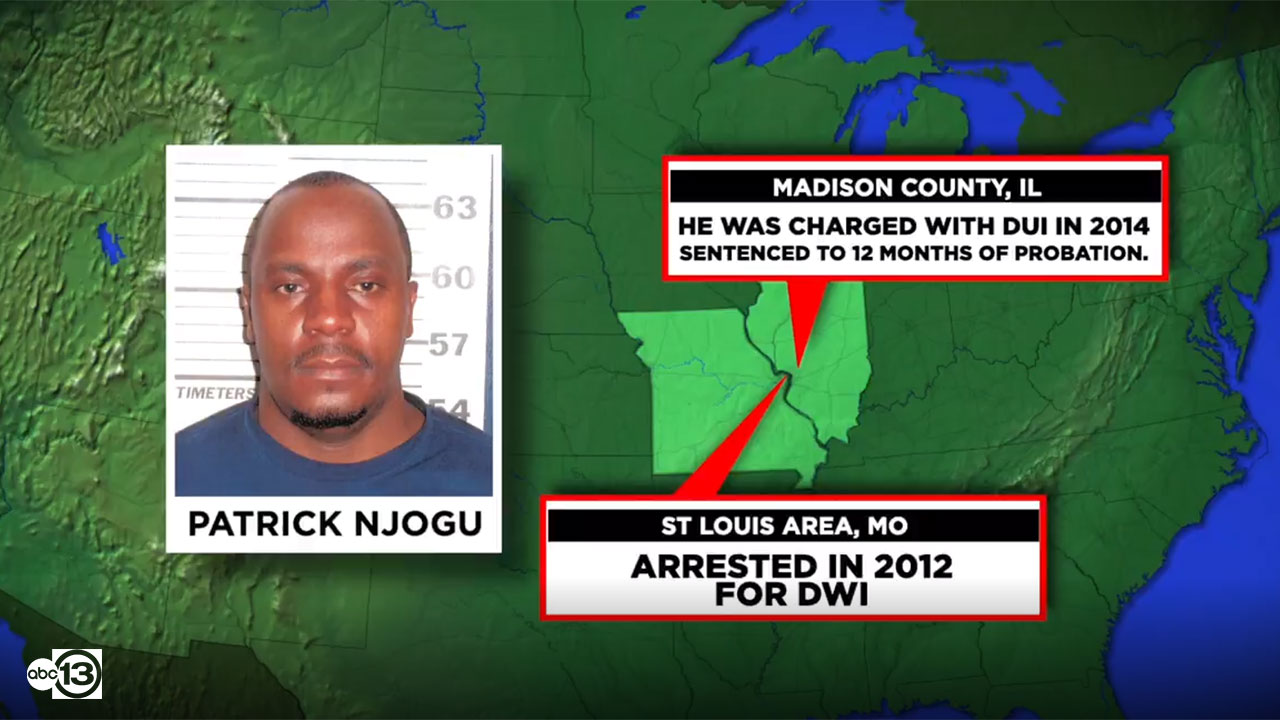 "He told the deputies or asked the deputies whether or not he was in the state of Missouri immediately after the crash," Teare said.

Njogu had a Texas driver's license.

According to the district attorney, as long as he had been adjudicated for the other convictions, there would be nothing that would prevent him from getting a Texas license.