Private sector, nonprofits, join US in sending aid to India amid COVID crisis 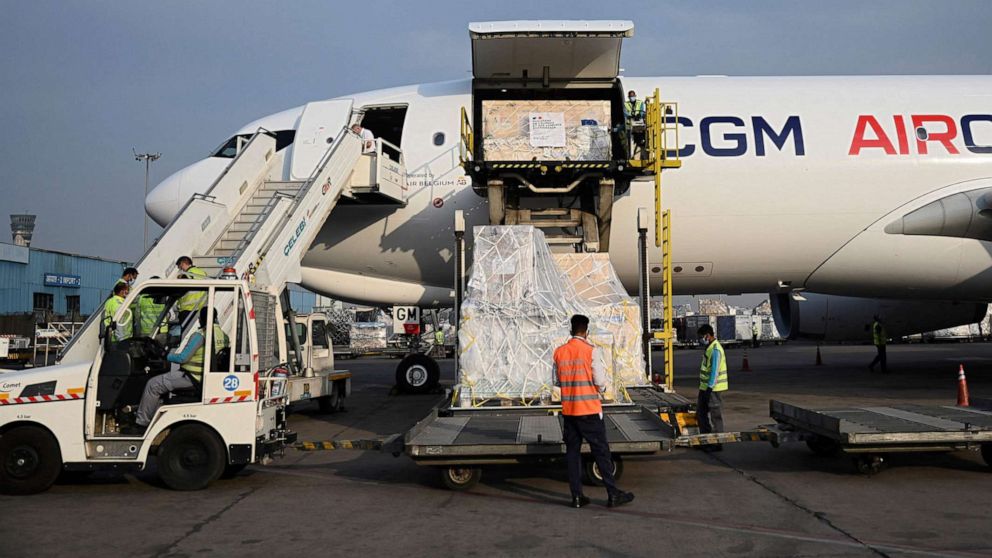 With restrictions on travel to the U.S. from India taking effect Tuesday, the Biden administration, private companies and nonprofits are working to send supplies and aid to help the country ravaged by the pandemic.

There are several exceptions, including for lawful permanent residents, spouses or children of U.S. citizens and green card holders, parents or siblings of a U.S. citizen or green card holder under 21 years old, health care and aid workers, and certain government officials with visas. The U.S. policy also says that flights that take off before the end of the day Monday will still be permitted to land after Tuesday.

The U.S. has sent six air shipments, four of which have already arrived, an official on the National Security Council said Monday. U.S. shipments, which will total $100 million according to the White House, included 125,000 vials of the antiviral drug remdesivir, which is used in the treatment of COVID-19, arrived in India Sunday night.

The State Department, in addition to coordinating U.S. government supplies, has also been urging private businesses to provide support for India in the wake of the crisis.

In a meeting last week, Secretary of State Antony Blinken held a virtual meeting with business leaders "to discuss how the United States and India can leverage the expertise and capabilities of the U.S. private sector to support urgent COVID-19 relief efforts in India," a press release from State Department spokesperson Ned Price said last week.

Private businesses have been responding to the crisis. Dr. Albert Bourla, the chief executive officer of Pfizer, announced Sunday that the company would donate medicines "valued at more than $70 million."

"Right now, Pfizer colleagues at distribution centers in the U.S., Europe and Asia are hard at work rushing shipments of Pfizer medicines that the Government of India has identified as part of its COVID treatment protocol," Bourla said in a letter posted to LinkedIn. "We are donating these medicines to help make sure that every COVID19 patient in every public hospital across the country can have access to the Pfizer medicines they need free of charge."

The statement also said that Pfizer's foundation was providing funding for other needed supplies like oxygen concentrators and ventilators.

"Pfizer stands in solidarity with all those currently affected by COVID-19 in India and around the world and will continue to do everything possible to provide assistance," Bourla said. "As we work to meet the public health need and to be a partner with the Government of India to establish a path forward for our vaccine, please know you and your loved ones are foremost in our thoughts and prayers."

Businesses are also working with NGOs and nonprofits to provide necessary supplies and funds. Sewa International, a faith-based nonprofit based in Houston, Texas, fundraised enough to send more than 2,000 oxygen concentrators to New Delhi last week. The UPS Foundation joined with the organization to send the shipments free of charge, Sewa International said in a statement Thursday.

"In the midst of this health crisis in India, we are absolutely thrilled to have the support of so many organizations and people in enabling this quick shipment of oxygen-concentrators to India," Arun Kankani the president of Sewa International said in the statement.