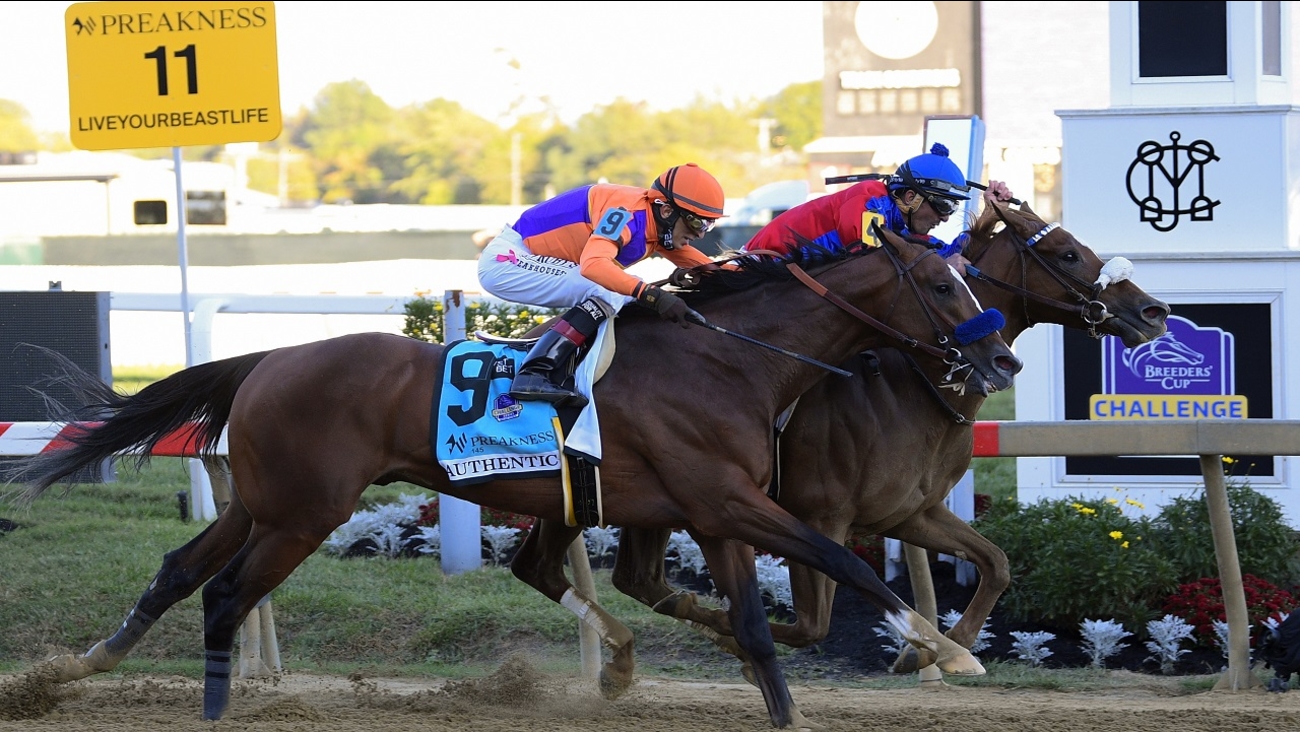 BALTIMORE, Maryland -- Swiss Skydiver beat favored Authentic in a stretch duel in the Preakness Stakes run without fans Saturday, making her the sixth filly and first since Rachel Alexandra in 2009 to win the race, which this year served as the third leg of the Triple Crown for the first time.

Swiss Skydiver upset favored Authentic, going off at odds of 11-1 and and finishing just ahead of 3-2 favorite Authentic and third-place Jesus' Team, who was 40-1. The 145th running of the Preakness at a mostly empty Pimlico Race Course came four weeks after the Kentucky Derby and 3 1/2 months since the Belmont as they were held out of order for the first time since the 1930s.

Trainer Kenny McPeek won the Preakness for the first time for his second Triple Crown victory after capturing the 2002 Belmont with Sarava. Swiss Skydiver was the first filly to run the race since 2014, when Ria Antonia finished last.

Swiss Skydiver beating Authentic and Thousand Words denied trainer Bob Baffert what would have been a record-breaking eighth Preakness win. Baffert was looking for his 17th victory in a Triple Crown race.

The Preakness was run with only owners, trainers and essential personnel in attendance, a far cry from the usual mid-May party with patrons in fancy hats and suits in some areas of the track and revelers in shorts and T-shirts in the infield.

Even after canceling the annual infield concert and festivities, the Maryland Jockey Club and Stronach Group that owns Pimlico hoped back in the spring that moving the race to the fall would allow for the possibility of having fans. Instead, all three Triple Crown races - run out of order for the first time since the 1930s - went on without them.

There was also no Triple Crown sweep for the 40th time in the past 42 years, when Authentic beat Belmont winner Tiz the Law in the Derby. Trainer Bob Baffert wheeled Authentic back for the Preakness, but a rematch will have to wait for the Breeders' Cup Classic Nov. 7 after Barclay Tagg gave Tiz the Law a rest to point him to that $6 million race.
Report a correction or typo
Related topics:
sportspreakness
Copyright © 2022 by The Associated Press. All Rights Reserved.
TOP STORIES
Teen shot during drive-by shooting west Harris County
Constellation Field has more than Cracker Jacks for fans to enjoy
Harris County DA demands Hidalgo stop 'daily public misstatements'
Woman claimed self-defense in deadly Clear Lake marina shooting
Houston shelters feeling impact of baby formula shortage
Here's how many inches of rain you could get over the next 7 days
Prairie View's 'Freedom Park' will send anti-racist message
Show More
Affordable child care shortage may have wider impact on Texas
Houston police working 2 separate shooting scenes across city
Dad in murder-suicide forced daughter under water in tub, records show
Could remains in shrinking Lake Mead be tied to Chicago mob?
$25K reward offered to find 14-year-old's 'vicious killer'
More TOP STORIES News