New York City terror attack: What we know about the suspect 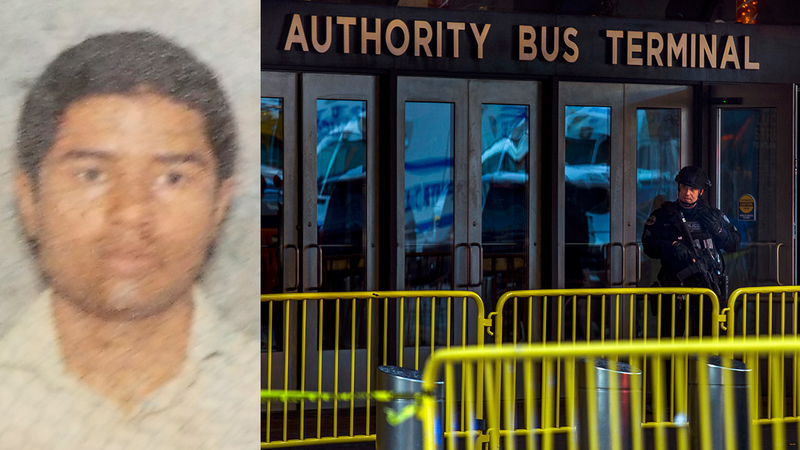 MIDTOWN, Manhattan -- Police officers continued to stand guard Tuesday at the Brooklyn apartment building where the suspect in Monday's pipe bombing in Manhattan most recently lived and likely assembled his bomb.

Meanwhile, more details are emerging about the man believed to be behind the blast in the underground corridor between Times Square and the Port Authority Bus Terminal.

The explosion, which happened around 7:30 a.m. in a passageway under 42nd Street between 7th and 8th Avenues, triggered a massive emergency response by the NYPD and FDNY both above and below ground, tangling subway and bus service. Authorities described it as a terror-related incident.

The suspect has been identified as 27-year-old Akayed Ullah, who is from Bangladesh and has been in the country for six years. Authorities say he entered the US on an F4 visa, a family-based visa, and lived at an address in Brooklyn. The FBI searched several locations in the borough.

The pipe bomb was assembled in the suspect's apartment, officials said, in an attack he is believed to have been planning for a year.

Ullah was severely injured in the apparent suicide bombing attempt, and he was taken into custody at the scene and transported to Bellevue Hospital. He appears to have been wearing a low-level explosive device that failed to properly detonate.

Fire officials said the suspect had burns to his hands and abdomen. Ullah is conscious and talking to authorities, telling them he is self-inspired from ISIS online propaganda.

A year after arriving, he obtained a license to drive a livery cab. Records show he got into two car accidents while on the road. In 2015, his license lapsed. Officials believe he then worked as an electrician.

"I can confirm that the individual held a TLC For-Hire Vehicle Driver's License from March 2012 through March 2015, at which time it lapsed and was not renewed. As taxi and for-hire vehicle drivers are independent contractors and not employees, I unfortunately have no way of knowing whether he drove for any particular base, or whether he simply got the license but didn't drive at all. That said, since he held an FHV license, if in fact he did drive, we do know that it could not have been a yellow taxi."

There are several known addresses for Ullah scattered through Brooklyn, where police descended on the locations, questioning family, friends, and neighbors in search of clues about his motivation.
EMBED More News Videos

Lucy Yang has the latest on the suspect.

"We are going to piece together who he is, what he is all about, who are his family members, his associates, his contacts, why did he do this?" NYPD Chief of Counterterrorism James Waters said.

Ullah's family in Bangladesh, including his wife, her parents and an uncle, have been taken in for questioning by counterterrorism police there. The uncle has since been released. The wife and her parents are in Dhaka, the capital.

Relatives and police told AP that Ullah last visited Bangladesh in September to see his wife and newborn son. He left both behind when he returned to the United States.

Some of Ullah's family members blasted what they claimed were heavy-handed tactics by investigators.

The Council on American Islamic Relations (CAIR) provided insight into Ullah's family. While they say they are heartbroken over the attack and allegations, they do not criticize their son. Instead, they level their wrath at law enforcement who tried to gather information from relatives.

Albert Fox Cahn, the legal director for CAIR New York, read a short, prepared statement on behalf of the Ullah family saying, "We are heartbroken by the violence that was targeted at our city today, and by the allegations being made against a member of our family. But we are also outraged by the behavior of law enforcement officials who have held children as small as four years old out in the cold and who held a teenager out of high school classes to interrogate him without a lawyer, without his parents. These are not the sorts of actions that we expect from our justice system, and we have every confidence that our justice system will find the truth behind this attack and that we will, in the end, be able to learn what occurred today. Thank you for your time."

Ullah lived with his father, mother and brother in a residential area with a large Bangladeshi community, neighbors said. The home was just off a shopping strip - a red two-story brick building.

Imam Kamal Nasser says he recognized the picture he saw of Ullah right away.

"It came as a shock," Nasser said.

For several years, Ullah prayed at the Kensington mosque where Nasser is Imam. He says Ullah was quiet and showed no signs of his radical beliefs.

"This mosque is a community builder, not a terrorist builder," Nasser said.

"Are you worried people will think that?" Eyewitness News asked.

"I hope not. This mosque is a prayer place, a place of peace and it will remain so," Nasser said.

Five other people were hurt in the explosion, but all the injuries are said to be minor. The victims were treated and released.

In Washington, President Trump said he wanted to prevent people like Ullah from entering the country. "The president's policy calls for an end to chain migration which is what this individual came to the United States through and if his policy had been in place, then that attacker would not have been allowed to come in the country," said White House Press Secretary Sarah Huckabee Sanders.