#ChickenWars: Whataburger weighs in on who really has the best chicken sandwich 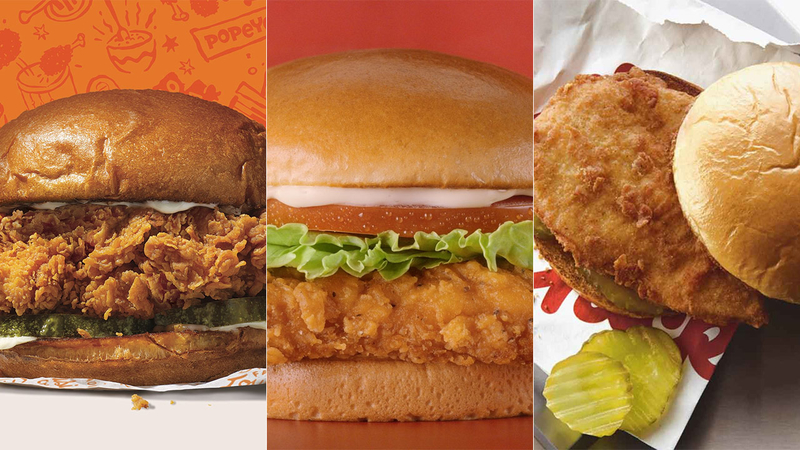 There's a beef brewing between fast food restaurants on social media over who has the best chicken sandwich. It has been dubbed the #ChickenWars.

Whataburger joined in on the argument Thursday over which fast food restaurant offers the best chicken sandwich.

They made sure to remind everyone that Texans know the "best chicken sandwich of all time" is none other than the Honey Butter Chicken Biscuit.

The Twitter feud started when Chick-fil-A tweeted, highlighting its sandwich as "the original."

Bun + Chicken + Pickles = all the ❤️ for the original. pic.twitter.com/qBAIIxZx5v

Popeyes quickly replied by tweeting the question, "...y'all good?"

The mocking tone of its tweet garnered a lot of attention.

Twitter users joined in the fray, sharing which restaurant they believed had the best chicken sandwich.

Then, Wendy's couldn't resist and got in the mix, tweeting "Y'all out here fighting about which of these fools has the second best chicken sandwich."

Y’all out here fighting about which of these fools has the second best chicken sandwich. pic.twitter.com/4v9RJFgy0T

Popeyes replied, "Sounds like someone just ate one of our biscuits. Cause y'all looking thirsty."

Sounds like someone just ate one of our biscuits. Cause y’all looking thirsty. https://t.co/89eqI5vk2z

Wendy's did not let them get away with that, tweeting "lol, guess that means the food's as dry as the jokes."

lol, guess that means the food’s as dry as the jokes https://t.co/aX3XnRunNW

Church's Chicken, meanwhile, said the case is closed when it comes to the #ChickenWars.

Zaxby's ears were burning when they heard people were talking about chicken sandwiches.

Did🥪 someone🥪 say🥪 sandwiches? 🥪 pic.twitter.com/RUcNboMPwY

Not to be left out of the party, Shake Shack intervened: "If you're lookin' for a chicken sandwich (without the beef ), you know where to find us."

If you're lookin' for a chicken sandwich (without the beef 😉), you know where to find us. pic.twitter.com/2wtV2POvFf

IHOP even tweeted about its chicken sandwich, "We have new Buffalo Crispy Chicken with @FranksRedHot, and FRANKly, it's pretty great!"

We have new Buffalo Crispy Chicken with @FranksRedHot, and FRANKly, it’s pretty great!

In a way to bring peace to the poultry pandemonium, Yelp tweeted they "have enough love in our hearts for all the chicken sandwiches."

Over here at Yelp, we have enough love in our hearts for all the chicken sandwiches, so we used Yelp data to find the top 20 best chicken sandwiches of all time: https://t.co/hK4u9oqdFQ. #ChickenWars pic.twitter.com/BPAQRidune

In 2018, Forbes featured the rise of Wendy's social media success.

At Advertising Week in New York...the packed room posed a question to Kurt Kane, chief concept and marketing officer at Wendy's. How many approvals does the Wendy's social media team need before it posts a tweet? Kane's answer: zero.