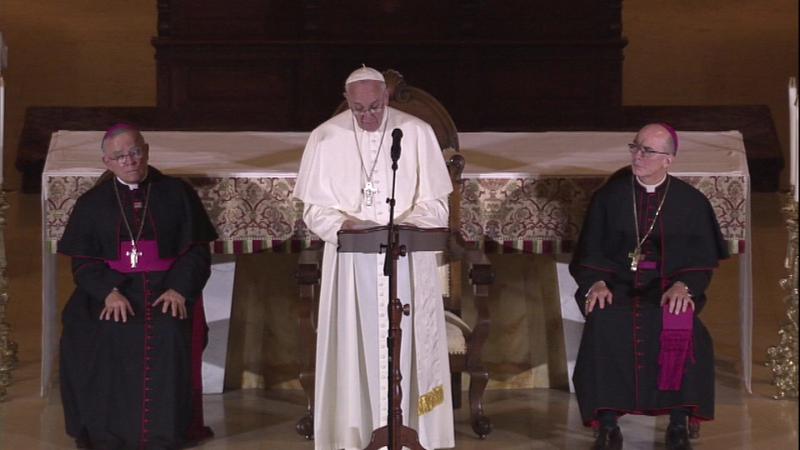 PHILADELPHIA -- Read the full text of Pope Francis' remarks to Bishops taking part in the World Meeting of Families in Philadelphia.

I have in my heart these stories of suffering of those youth that were sexually abused, and it continues to be on my mind that people who had the responsibility to take care of these tender ones violated that trust and caused them great pain.

God weeps for the sexual abuse of children. These cannot be maintained in secret, and I commit to a careful oversight to ensure that youth are protected and that all responsible will be held accountable.

Those who have survived this abuse have become true heralds of mercy. Humbly, we owe each of them our gratitude for their great value as they have had to suffer this terrible abuse, sexual abuse of minors.

I would like to express my gratitude to the archbishop, and I felt it was very important that I share this message with you today, and I am happy to be able to share these moments of pastoral reflection with you amid the joyful celebrations of this World Meeting of Families.

For the Church, the family is not first and foremost a cause for concern, but rather the joyous confirmation of God's blessing upon the masterpiece of creation. Every day, all over the world, the Church can rejoice in the Lord's gift of so many families who, even amid difficult trials, remain faithful to their promises and keep the faith!

I would say that the foremost pastoral challenge of our changing times is to move decisively towards recognizing this gift. For all the obstacles we see before us, gratitude and appreciation should prevail over concerns and complaints. The family is the fundamental locus of the covenant between the Church and God's creation. Without the family, not even the Church would exist. Nor could she be what she is called to be, namely "a sign and instrument of communion with God and of the unity of the entire human race" (Lumen Gentium, 1).

Needless to say, our understanding, shaped by the interplay of ecclesial faith and the conjugal experience of sacramental grace, must not lead us to disregard the unprecedented changes taking place in contemporary society, with their social, cultural - and now juridical - effects on family bonds. These changes affect all of us, believers and non-believers alike. Christians are not "immune" to the changes of their times. This concrete world, with all its many problems and possibilities, is where we must live, believe and proclaim.

Until recently, we lived in a social context where the similarities between the civil institution of marriage and the Christian sacrament were considerable and shared. The two were interrelated and mutually supportive. This is no longer the case. To describe our situation today, I would use two familiar images: our neighborhood stores and our large supermarkets.

There was a time when one neighborhood store had everything one needed for personal and family life. The products may not have been cleverly displayed, or offered much choice, but there was a personal bond between the shopkeeper and his customers. Business was done on the basis of trust, people knew one another, they were all neighbors. They trusted one another. They built up trust. These stores were often simply known as "the local market".

Then a different kind of store grew up: the supermarket. Huge spaces with a great selection of merchandise. The world seems to have become one of these great supermarkets; our culture has become more and more competitive. Business is no longer conducted on the basis of trust; others can no longer be trusted. There are no longer close personal relationships. Today's culture seems to encourage people not to bond with anything or anyone, not to trust. The most important thing nowadays seems to be follow the latest trend or activity. This is even true of religion. Today consumerism determines what is important. Consuming relationships, consuming friendships, consuming religions, consuming, consuming... Whatever the cost or consequences. A consumption which does not favor bonding, a consumption which has little to do with human relationships. Social bonds are a mere "means" for the satisfaction of "my needs". The important thing is no longer our neighbor, with his or her familiar face, story and personality.

The result is a culture which discards everything that is no longer "useful" or "satisfying" for the tastes of the consumer. We have turned our society into a huge multicultural showcase tied only to the tastes of certain "consumers", while so many others only "eat the crumbs which fall from their masters' table" (Mt 15:27).

This causes great harm. I would say that at the root of so many contemporary situations is a kind of impoverishment born of a widespread and radical sense of loneliness. Running after the latest fad, accumulating "friends" on one of the social networks, we get caught up in what contemporary society has to offer. Loneliness with fear of commitment in a limitless effort to feel recognized.

Should we blame our young people for having grown up in this kind of society? Should we condemn them for living in this kind of a world? Should they hear their pastors saying that "it was all better back then", "the world is falling apart and if things go on this way, who knows where we will end up?" No, I do not think that this is the way. As shepherds following in the footsteps of the Good Shepherd, we are asked to seek out, to accompany, to lift up, to bind up the wounds of our time. To look at things realistically, with the eyes of one who feels called to action, to pastoral conversion. The world today demands this conversion on our part. "It is vitally important for the Church today to go forth and preach the Gospel to all: to all places, on all occasions, without hesitation, reluctance or fear. The joy of the Gospel is for all people: no one can be excluded" (Evangelii Gaudium, 23)

We would be mistaken, however, to see this "culture" of the present world as mere indifference towards marriage and the family, as pure and simple selfishness. Are today's young people hopelessly timid, weak, inconsistent? We must not fall into this trap. Many young people, in the context of this culture of discouragement, have yielded to a form of unconscious acquiescence. They are paralyzed when they encounter the beautiful, noble and truly necessary challenges which faith sets before them. Many put off marriage while waiting for ideal conditions, when everything can be perfect. Meanwhile, life goes on, without really being lived to the full. For knowledge of life's true pleasures only comes as the fruit of a long-term, generous investment of our intelligence, enthusiasm and passion.

As pastors, we bishops are called to collect our energies and to rebuild enthusiasm for making families correspond ever more fully to the blessing of God which they are! We need to invest our energies not so much in rehearsing the problems of the world around us and the merits of Christianity, but in extending a sincere invitation to young people to be brave and to opt for marriage and the family. Here too, we need a bit of holy parrhesia! A Christianity which "does" little in practice, while incessantly "explaining" its teachings, is dangerously unbalanced. I would even say that it is stuck in a vicious circle. A pastor must show that the "Gospel of the family" is truly "good news" in a world where self-concern seems to reign supreme! We are not speaking about some romantic dream: the perseverance which is called for in having a family and raising it transforms the world and human history.

A pastor serenely yet passionately proclaims the word of God. He encourages believers to aim high. He will enable his brothers and sisters to hear and experience God's promise, which can expand their experience of motherhood and fatherhood within the horizon of a new "familiarity" with God (Mk 3:31-35).

A pastor watches over the dreams, the lives and the growth of his flock. This "watchfulness" is not the result of talking but of shepherding. Only one capable of standing "in the midst of" the flock can be watchful, not someone who is afraid of questions, contact, accompaniment. A pastor keeps watch first and foremost with prayer, supporting the faith of his people and instilling confidence in the Lord, in his presence. A pastor remains vigilant by helping people to lift their gaze at times of discouragement, frustration and failure. We might well ask whether in our pastoral ministry we are ready to "waste" time with families. Whether we are ready to be present to them, sharing their difficulties and joys.

Naturally, experiencing the spirit of this joyful familiarity with God, and spreading its powerful evangelical fruitfulness, has to be the primary feature of our lifestyle as bishops: a lifestyle of prayer and preaching the Gospel (Acts 6:4). By our own humble Christian apprenticeship in the familial virtues of God's people, we will become more and more like fathers and mothers (as did Saint Paul: cf. 1 Th 2:7,11), and less like people who have simply learned to live without a family. Our ideal is not to live without love! A good pastor renounces the love of a family precisely in order to focus all his energies, and the grace of his particular vocation, on the evangelical blessing of the love of men and women who carry forward God's plan of creation, beginning with those who are lost, abandoned, wounded, broken, downtrodden and deprived of their dignity. This total surrender to God's agape is certainly not a vocation lacking in tenderness and affection! We need but look to Jesus to understand this (cf. Mt 19:12). The mission of a good pastor, in the style of God - and only God can authorize this, not our own presumption! - imitates in every way and for all people the Son's love for the Father. This is reflected in the tenderness with which a pastor devotes himself to the loving care of the men and women of our human family.

For the eyes of faith, this is a most valuable sign. Our ministry needs to deepen the covenant between the Church and the family. Otherwise it becomes arid, and the human family will grow irremediably distant, by our own fault, from God's joyful good news.

If we prove capable of the demanding task of reflecting God's love, cultivating infinite patience and serenity as we strive to sow its seeds in the frequently crooked furrows in which we are called to plant, then even a Samaritan woman with five "non-husbands" will discover that she is capable of giving witness. And for every rich young man who with sadness feels that he has to calmly keep considering the matter, an older publican will come down from the tree and give fourfold to the poor, to whom, before that moment, he had never even given a thought.

May God grant us this gift of a renewed closeness between the family and the Church. The family is our ally, our window to the world, and the evidence of an irrevocable blessing of God destined for all the children who in every age are born into this difficult yet beautiful creation which God has asked us to serve!