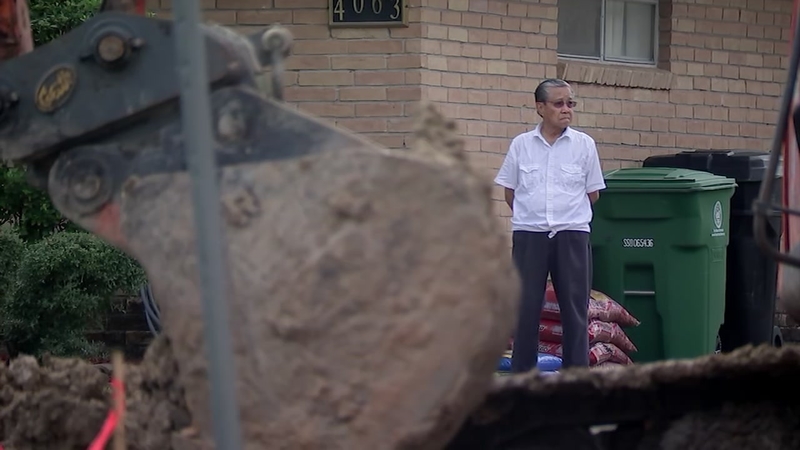 "It's time they finish it," Hudson said.

City records show this $41 million drainage project was supposed to be finished in 2017, but it's been delayed. Now they won't finish until sometime next year, two years late.

"You know that I will be dead before they are finished," Hudson said.

While Hudson wants the dozers out, Roland Balderas on the east side can't wait for them to move in.

"When it rains hard, the streets start covering up here," Balderas said.

A $23 million drainage project in Balderas' Magnolia Park neighborhood hasn't started construction yet, and city documents show it too has been delayed.

Both projects are among the many supposedly funded, at least in part, by the City of Houston's drainage fee. It's a small addition to Houstonians water bills added by voters in 2010. It's up for re-approval on this year's ballot and our investigation shows the millions of extra dollars collected aren't creating more improvements.

The program, started under Mayor Bill White, continued under Annise Parker and now potentially renewed under Sylvester Turner, started as a promise to get things fixed.

"I'm voting for Prop One: a pay-as-you-go plan to finally rebuild our streets, fix drainage problems and create jobs," one ad said during the initial campaign. "The best part: politicians can't divert a single cent."

That last part got caught up in a legal mess that ultimately led the Texas Supreme Court to rule the ballot language was misleading.

Mayor Sylvester Turner blames it on a Rebuild Houston promise to pay down city debt.

"We're not doing as much as we would like because we've changed from debt financing," Turner said. "We just have to finish paying down the debt and then you'll see those numbers a substantial increase."

That simply doesn't hold up. The city's credit card balance is just as big today as it was before Rebuild Houston was approved.

While the mayor insists the debt paydown is just over a billion, the city controller said the number is closer to $623 million.

Houston City Councilmember Mike Knox's office asked the Controller about the debt. Brown emailed Knox's team:
"The Controller's Office cannot attest to the claim that Rebuild has paid down $1 billion of city debt. The city has paid down $622,962,600 of Rebuild Houston related debt per the... Finance Department."

That is still a sizable number, but that is paying down solely street and drainage debt. In the interim, the city has run up levels of other public improvement debt. According to the City of Houston's most recent annual financial report, the level of Public Improvement Debt remains near $2.4 billion, about what it was when Houstonians first paid the drainage fee.

The mayor's team points out the city isn't borrowing any more money specifically to make your streets and drainage better, but it is borrowing for all manner of other public improvements.

City spending to buy cars and trucks is up. Improvements for garbage collection are up. The increase in housing spending is astronomical.

When it comes to streets and drainage, city records show less than half of the $781 million you paid in drainage fees actually went to drainage projects. Street improvements make up for the difference.

It's the city's own accounting. You don't need to tell Roland.

"Haven't seen much of anything," Balderas said.

He pays his drainage fee every month. He's eager to see it put to use.

"There's no money," Balderas said. "I don't see any money being spent."

INTERACTIVE: See what projects are in your neighborhood
Instructions: Check "ReBuild Houston Planning" layers on the left side, then check the boxes underneath to see the Rebuild Houston projects. Can't see the map below? Click here.

Have a tip for Ted Oberg? A problem to solve? Get in touch with us on our tip page, or send a tip below. (On mobile? You can open our form by tapping here.)
Related topics:
politicshoustonted oberg investigatestaxeshouston city council
Copyright © 2021 KTRK-TV. All Rights Reserved.
TED OBERG INVESTIGATES