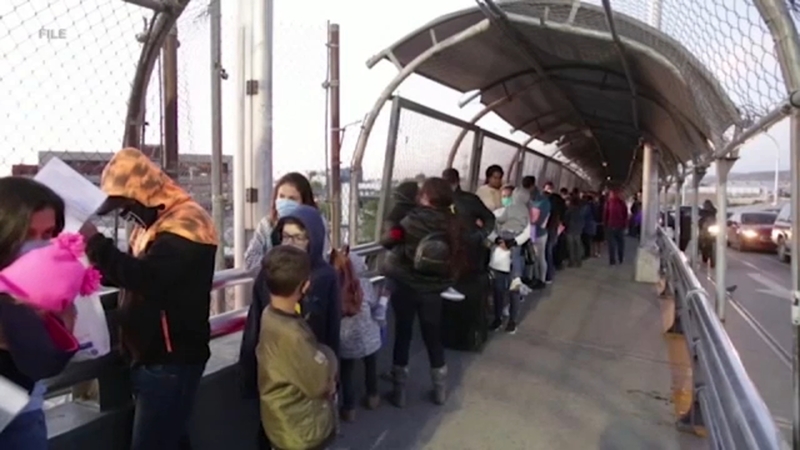 The Biden administration is preparing to convert its immigrant family detention centers in South Texas into Ellis-Island-style rapid-processing hubs that will screen migrant parents and children with a goal of releasing them into the United States within 72 hours, according to Department of Homeland Security draft plans obtained by The Washington Post.

Transforming family detention amounts to a wholesale repudiation not only of the Trump administration's policies but also those of former President Barack Obama, and presents a dramatically new vision of how to handle the fast-changing character of mass migration at the southern border.

For decades, single adults - particularly men - dominated the flows northward into the United States but families and minors traveling without their parents have risen substantially in recent years. Before the pandemic struck, migrant families and unaccompanied minors were a majority of those taken into custody at the southwest border, a trend that more closely resembles refugee streams worldwide.

During the Obama and Trump administrations, most families were quickly released or deported. But some were held in dormitory-style facilities for weeks or months, sometimes longer, for immigration proceedings. Advocates for these families have long said they shouldn't be detained at all - a sentiment that President Joe Biden echoed on the campaign trail last year.

Children should be released from ICE detention with their parents immediately," Biden wrote on Twitter in June. "This is pretty simple, and I can't believe I have to say it: Families belong together."

Six weeks into Biden's presidency, advocates are frustrated that his administration has continued to detain families and expel them from the border under a public-health order. The number of detained family members more than doubled from 228 adults and children before Biden took office to 476 last week, federal records show.

While the tally is a fraction of the combined capacity of 3,300 people at three family residential centers, the uptick baffled child-welfare advocates who hoped that the detention centers would finally close. They note that Biden and DHS Secretary Alejandro Mayorkas helped to expand use of these detention centers during the Obama administration.

"There needs to be open expression of what they're going to do with these facilities," said Bridget Cambria, a lawyer representing migrant families in Pennsylvania. "They shouldn't detain families or children even for one second."

SEE ALSO: US at risk of maxing out capacity to hold migrant children; Biden admin under scrutiny for reopening surge facility

The Biden administration has said it is reviewing the way it uses family detention facilities but told a federal judge last week in a lawsuit over the detentions that their policies had not changed.

But DHS officials, speaking on condition of anonymity to describe the unpublicized plans, said the transition to rapid-release centers is already underway.

ICE emptied out the Berks Family Residential Center in Leesport, Pa, on Friday, releasing all 21 people there. ICE confirmed that the center is empty but would not say why.

Officials are considering turning Berks into a women-only facility for migrants, a DHS official said, while Karnes and Dilley would serve as quick-release intake centers that would screen migrant families, check their backgrounds and release them pending an immigration court hearing. Some would enroll in "alternatives to detention," such as ankle monitoring programs. Families would undergo coronavirus testing and nonprofits would then help them secure airplane or bus tickets to their final destinations in the United States, typically staying with friends or family.

The goal is to process and release 100 families per day, the plans show. Migrants who test positive for covid will be quarantined for 10 days.

ICE would not confirm the plans Wednesday and said the detention centers are under review but remain "fully operational." A spokeswoman said that most attempted border crossers are still being expelled at the southern border.

Advocates for immigrants have cheered the preliminary plans in recent days - albeit cautiously, because DHS has not made a formal announcement.

In Texas, advocates said the region's top immigration officials called them for an emergency conference call on Feb. 20 to discuss plans to transform the centers into shorter-term facilities. Officials told them to prepare for more migrants to be released from Dilley and Karnes.

"It's incredibly encouraging to hear a completely different philosophy and attitude for people coming into this country," said Daniel Klein, board chair for the Interfaith Welcome Coalition, and who was on the call, which was first reported by the San Antonio Express-News.

"We welcome the change because the detention of families - we never thought that was a good system or a good policy at all for individuals who are coming to the U.S.," said Edna Yang, co-executive director of American Gateways, an immigration legal aid organization in Texas, who was on the ICE conference call last month. "They shouldn't be detained and they should be given the opportunity to go before the immigration judge and be released in the community and not held like prisoners."

These plans are part of a series of changes Biden has made to the immigration system since taking office. But as he tries to rebuild the system and make it more humane, Biden is also eager to skirt a border crisis that could imperil his legislative agenda, including an effort to legalize 11 million longtime undocumented immigrants.

Many Republican lawmakers and some Democrats from southern border communities expressed concern that hastening the release of migrant families would encourage an even larger surge on the border at a time when they are reeling from the coronavirus and a deadly winter storm that cut power to millions and killed more than 30 in Texas.

Rep. Henry Cuellar, D-Texas, said he urged the Biden administration to slow all of their immigration plans in an appearance on Fox News Wednesday, citing statistics showing border apprehensions are on track to reach the historic levels of families and unaccompanied minors crossing in 2019.

"Let's be cautious," Cuellar said he told the White House. "They cannot only listen to the immigration activists. They also need to listen to the communities on the border that I represent, the mayors, the judges, the NGOs down there. And with that, you can come up with a balanced approach.

The Biden administration has not yet detailed how exactly it will cope with another influx.

In 2014 - when Biden was vice president and Mayorkas was deputy DHS secretary - the United States experienced an influx of 68,000 families, up from 14,800 the year before. At the time, Biden said this was a "crisis" that was "untenable and unsustainable," and he and Mayorkas worked to stem flows from Central America and expanded family detention by opening the facilities in Dilley and Karnes. Mayorkas said then that he would ensure that "the detention of adults with children is done as humanely as possible."

After the centers expanded migrant families apprehended at the border dropped below 40,000, but detention did not stop the flows and after a judge ruled that officials could not detain children longer than 20 days in unlicensed facilities the numbers began to rise again.

Advocates for immigrants say detention had little impact because of the severe conditions in Central America and the Caribbean that are driving migrants north, such as violence, climate change, poverty and government corruption.

The numbers have only continued to grow.

More than 470,000 migrant families and 76,000 unaccompanied minors arrived in fiscal year 2019, a record on both counts, and most were released into the country pending a court hearing.

Dora Schriro, who led ICE's office of detention policy and planning, said ICE's experience with family detention shows that it is harmful to both children and their parents by placing them in conditions where they are afraid. She said she found the conditions in family detention "dehumanizing" and removed all families from a Texas facility and reduced capacity to 84 beds at the facility in Pennsylvania, a former nursing home that opened under the George W. Bush administration. She left ICE in 2009 to run New York City's Department of Correction.

After the Obama administration dramatically expanded the detention centers to more than 3,300 beds, she said DHS asked her and others to issue recommendations in a report published in late 2016, just before Trump took office. Their first recommendation: DHS should operate under the "presumption that detention is generally neither appropriate nor necessary for families" and "detention is never in the best interest of children."

"DHS should discontinue the general use of family detention, reserving it for rare cases when necessary," because someone is a flight risk or a danger to the community, the report said.

Soon after, Trump took office and sought to detain families and even separated parents from their children in a failed attempt to stem the rising flows of migrants.

Schriro said the Biden administration faces dual challenges at the border - keeping its international obligations to offer safe refuge to people feeling harm, and making sure Americans are safe from people who would pose a danger crossing into the United States.

"You've got two really critical commitments and this administration is finding a path to honor both of those obligations," she said. "The trick is not sacrificing one for the other."

The Texas Tribune is a nonprofit, nonpartisan media organization that informs Texans - and engages with them - about public policy, politics, government and statewide issues.
Report a correction or typo
Related topics:
politicstexasdepartment of homeland securitytexas newsu.s. & worldpoliticstexas tribuneimmigration
TEXAS TRIBUNE