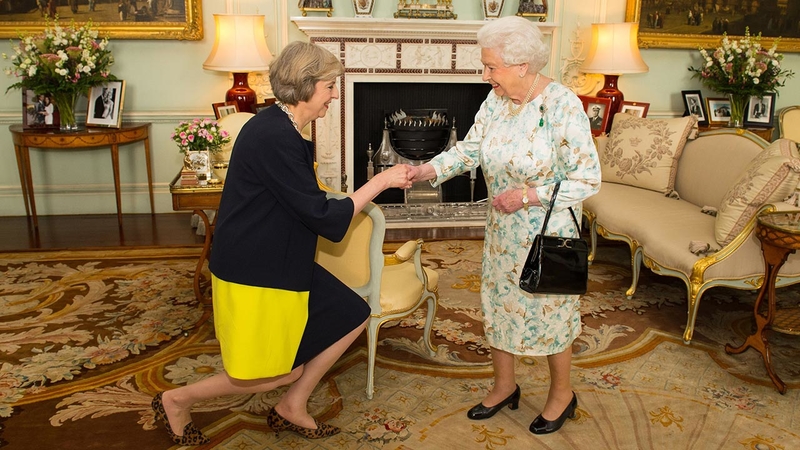 LONDON -- Spectacularly punished by voters who took away her majority in Parliament, a politically wounded Theresa May sought to soldier on Friday as Britain's prime minister, resisting pressure to resign after the failure of her high-stakes election gamble made the massive challenge of untangling Britain from the European Union only more complex and uncertain.

Having called an early election in hopes of getting an increased majority that could have strengthened her hand in Britain's exit talks with the EU, May instead saw her majority evaporate completely - leaving her fortunes hanging by a thread and dark clouds over the Brexit negotiations just 10 days before they are due to start.

Rather than resign, May clung to the hope that her Conservatives might still be able to govern by making deals with another party or group of parties. In a largely symbolic step, she went to see Queen Elizabeth II just after midday Friday to seek her approval to form a government.

After leaving Buckingham Palace, May said Britain needs certainty now more than ever and that she'll work with Northern Ireland party. She also said that she'll stick to the timetable for Britain to leave the European Union.

Unexpectedly faced with the prospect of dealing with now-shaky British leadership, perplexed EU leaders sought to make sense of the drama but also made clear that while Britain might be accorded time to regroup, it should not expect an extension of the two-year deadline for the Brexit talks to end.

Chief EU negotiator Michel Barnier tweeted that "negotiations should start when U.K. is ready." But EU Council President Donald Tusk said: "We know when they must end." Mostly, the EU mood was one of frustration that the already tough Brexit talks were likely to become only more difficult.

The election shock is "yet another own goal" that will make "already complex negotiations even more complicated," said the European Parliament's top Brexit official, Guy Verhofstadt.

With 649 of 650 seats in the House of Commons declared, May's bruised Conservatives had 318 - short of the 326 they needed for an outright majority and well down from the 330 seats they had before May's roll of the electoral dice.

May's best lifeline appeared to be a possible - but also uncertain - deal with a Northern Ireland party that won 10 seats. Democratic Unionist Party leader Arlene Foster told British media that contacts will be made over the weekend. But she added that it would be "difficult for (May) to survive" and that "it is too soon to talk about what we're going to do."

In May's camp, recriminations were immediate and stinging.

The biggest winner was Labour leader Jeremy Corbyn. Labour's increase in seats from 229 to 261 - with one seat still undecided - confounded expectations that his left-wing views made him electorally toxic.

In a buoyant mood, Corbyn piled on pressure for May to resign, saying Friday morning that people have had enough of austerity politics and cuts in public spending. He ruled out the potential for deals or pacts with other progressive parties in Parliament.

"The arguments the Conservative Party put forward in this election have lost, and we need to change."

Initially blind-sided by May's snap election call, and written off by many pollsters, Labour surged in the final weeks of the campaign. It drew strong support from young people, who appeared to have turned out to vote in bigger-than-expected numbers.

As she was resoundingly re-elected to her Maidenhead seat in southern England, May looked tense. Without detailing her next steps, she said: "The country needs a period of stability, and whatever the results are the Conservative Party will ensure we fulfill our duty in ensuring that stability."

The fast-moving events both flummoxed and fascinated voters.

"It's a bit of a mess," Peter Morgan, 35, said in London. "I was kind of hoping it would just go the way that the polls suggested it would and we could have a quiet life in Westminster but now it's going to be a bit of a mess."

Many predicted May would soon be gone. Steven Fielding, a professor of politics at the University of Nottingham, called her "a zombie prime minister."

"Clearly if she's got a worse result than two years ago and is almost unable to form a government, then she, I doubt, will survive in the long term as Conservative Party leader," former Conservative Treasury chief George Osborne said on ITV.

May wasn't the only big loser.

In a blow to its hopes for another referendum on whether Scotland should leave the United Kingdom, the pro-independence Scottish National Party lost about 20 of its 54 seats. Its casualties included Alex Salmond, one of the party's highest-profile lawmakers.

European leaders grappled with the question: what next? French Prime Minister Edouard Philippe said the election shock didn't necessarily mean that Britons have changed their minds about leaving but also predicted that "the tone" of negotiations may be affected.

"These are discussions that will be long and that will be complex. So let's not kid ourselves," he said on Europe 1 radio.

EU budget commissioner Guenther Oettinger said the EU is prepared to stick to the timetable that calls for negotiations to start in mid-June, but also said: "Without a government, there's no negotiation."

May, who went into the election with a reputation for quiet competence, was criticized for a lackluster campaigning style and for a plan to force elderly people to pay more for their care, a proposal her opponents dubbed the "dementia tax." As the polls suggested a tightening race, pollsters spoke less often of a landslide and raised the possibility that May's majority would be eroded.

Then, attacks in Manchester and London that killed a total of 30 people brought the campaign to a halt - twice, sent a wave of anxiety through Britain and forced May to defend the government's record on fighting terrorism. Corbyn accused the Conservatives of undermining Britain's security by cutting the number of police on the streets.

Eight people were killed near London Bridge on Saturday when three men drove a van into pedestrians and then stabbed revelers in an area filled with bars and restaurants. Two weeks earlier, a suicide bomber killed 22 people as they were leaving an Ariana Grande concert in Manchester.