Philippines president tells President Obama 'you can go to hell' 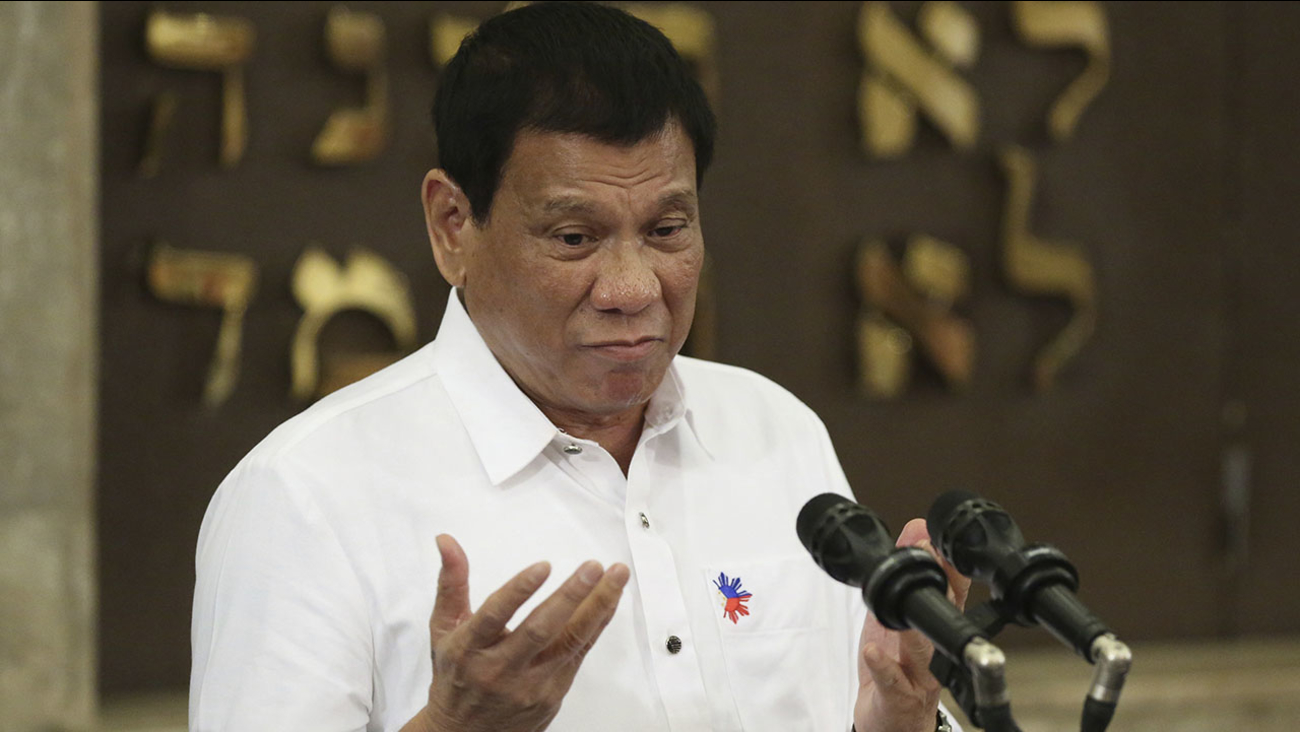 MANILA, PHILIPPINES -- Philippine President Rodrigo Duterte told his U.S. ally Barack Obama "you can go to hell" in a speech Tuesday that was his latest tirade against the U.S. over its criticism of his deadly anti-drug campaign.

He also lashed out anew at the European Union, saying the 28-nation bloc, which has also criticized his brutal crackdown, "better choose purgatory, hell is filled up."

Duterte, who took office in June, has been hypersensitive to criticism over his crackdown, which has left more than an estimated 3,000 suspected drug dealers and pushers dead in just three months, alarming the United Nations, the E.U., the U.S. and human rights watchdogs.

The tough-talking former city mayor, who describes himself as a left-leaning leader, has had an uneasy relationship with the U.S. and with Obama and has declared intentions to bolster relations with China and Russia as he revamps the country's foreign policy that has long leaned on Washington.

In a speech before a local convention attended by officials and business executives, Duterte outlined his disappointments with the U.S., which has asked his government to stop the widespread killings under his anti-drug campaign and has questioned whether human rights are being violated. He also described Washington as an unreliable ally, saying Filipino forces have not benefited from joint combat exercises with U.S. troops.

Angered by U.S. criticism, Duterte has made a series of public pronouncements that he could scale back the activities and presence of visiting U.S. troops in the country. He said he wanted them out of the volatile south, saying their presence has inflamed restiveness among minority Muslims, which could complicate efforts to forge a peace accord with Muslim insurgents.

Duterte has announced he will not allow the Philippine navy to conduct joint patrols with the U.S. military in the disputed South China Sea because it could spark an armed conflict in Philippine territory.

Still, Duterte has said he will not abrogate a 1951 Mutual Defense Treaty with the U.S. and will maintain the long alliance with America, one of his country's largest trading partners and provider of development and military aid and defense equipment.

Last week, Duterte said the joint U.S.-Philippine combat exercises to be held this week, the first of his presidency, would also be the last of his tenure. The exercises, centering on amphibious landing drills, started Tuesday under some uncertainty because of those remarks.

Marine commanders from both sides said at the opening ceremony that the exercises, involving 1,100 American and 400 Filipino military personnel, are aimed at improving readiness by the two countries to respond to a range of crises while deepening their historic ties.

U.S. Embassy officials said Washington has not been formally notified by the Philippine government of any move to scrap other planned drills. Such a move by the Philippines would impede Washington's plans to expand the footprint of U.S. forces in Southeast Asia to counter China.

A Philippine military spokesman for the ongoing exercises, Capt. Ryan Lacuesta, sidestepped the question of whether Duterte's remarks have affected the troops and the atmosphere of the drills, partly staged to improve camaraderie between the two combat forces.

"As much as I would like to answer that question, I would leave that to higher authorities," Lacuesta said Tuesday.

U.S. Marine Brig. Gen. John Jansen said that aside from promoting regional security, the exercises have helped save lives in terms of fostering more rapid and organized responses to disasters like Typhoon Haiyan in 2013.

Citing a much-awaited drill that involves American and Filipino marines wading ashore in an amphibious beach landing and in boat raids, Jansen said the exercise "is not just about projecting power from the sea, it is about growing a capability."
Related topics:
politicspresident barack obamau.s. & world
Copyright © 2021 by The Associated Press. All Rights Reserved.
More Videos
From CNN Newsource affiliates
TOP STORIES